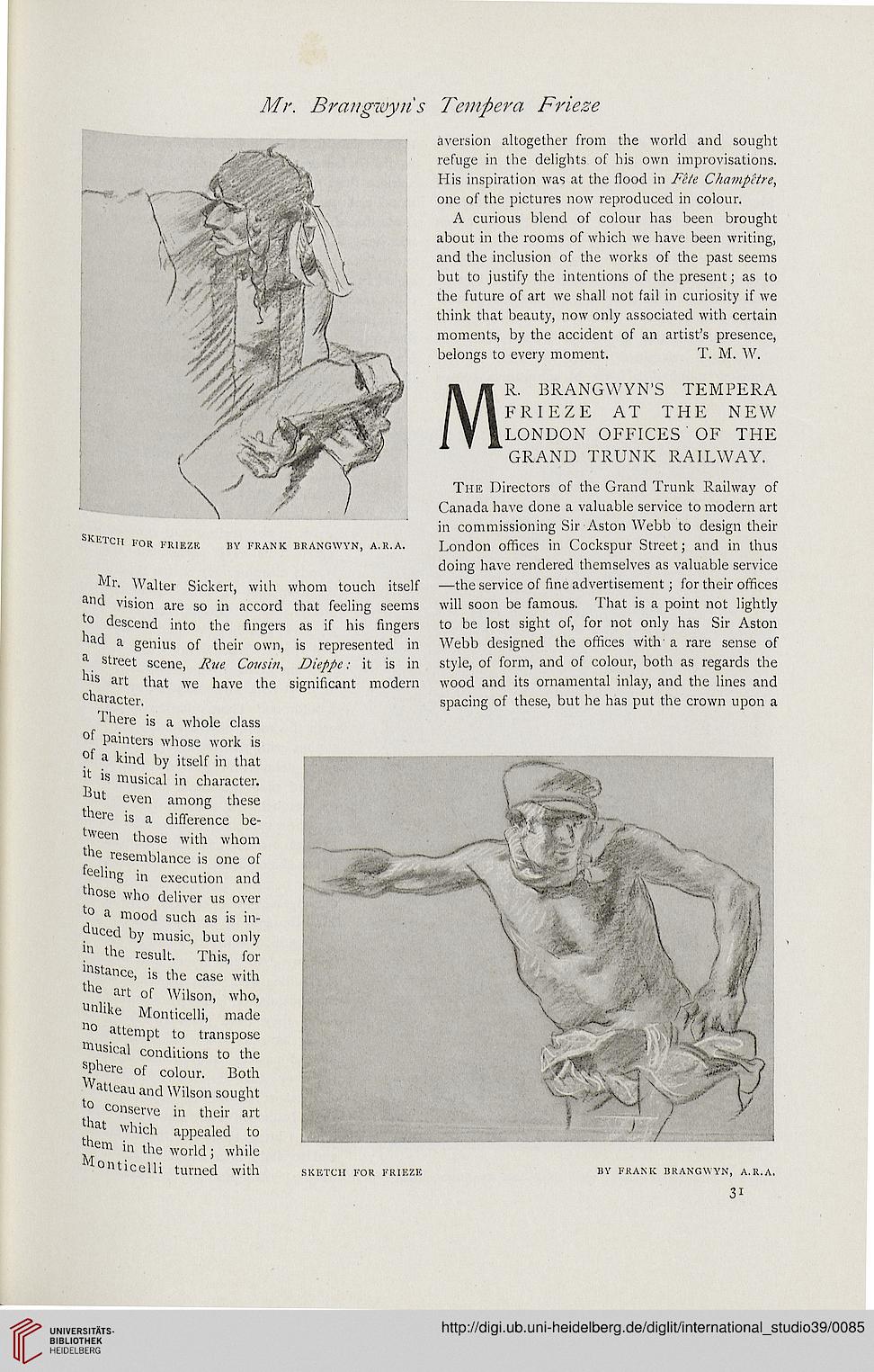 aversion altogether from the world and sought
refuge in the delights of his own improvisations.
His inspiration was at the flood in Fete Champitre,
one of the pictures now reproduced in colour.

A curious blend of colour has been brought
about in the rooms of which we have been writing,
and the inclusion of the works of the past seems
but to justify the intentions of the present; as to
the future of art we shall not fail in curiosity if we
think that beauty, now only associated with certain
moments, by the accident of an artist's presence,
belongs to every moment. T. M. W.

THE Directors of the Grand Trunk Railway of
Canada have (lone a valuable service to modern art
in commissioning Sir Aston Webb to design their
skktcii for KRiBztt by frank brangwvn, a.r.a. London offices in Cockspur Street; and in thus

doing have rendered themselves as valuable service
Mr. Walter Sickert, with whom touch itself -the service of fine advertisement; for their offices
and vision are so in accord that feeling seems will soon be famous. That >s a point not lightly
to descend into the lingers as if his fingers to be lost sight of, for not only has Sir Aston
^d a genius of their own, is represented in Webb designed the offices With a rare sense of
* street scene, Rue Cousin, Dieppe: it is in style, of form, and of colour, both as regards the
art that we have the significant modern wood and its ornamental inlay, and the lines and
character. spacing of these, but he has put the crown upon a

l'here is a whole class
°f painters whose work is
0|' a kind by itself in that
11 is musical in character.
But even among these
there is a difference be-
tween those with whom
the resemblance is one of
feeling in execution and
those who deliver us over
to a mood such as is in-
duced by music, but only
Ul the result. This, for
instance, is the case with
the art of Wilson, who,
unlike Monticelli, made
110 attempt to transpose
musical conditions to the
sphere of colour. Both
Watleau and Wilson sought
to conserve in their art
that which appealed to
them in the world; while
Monticelli turned with sketch for krieze " ***** brangwyn, a.u.a.