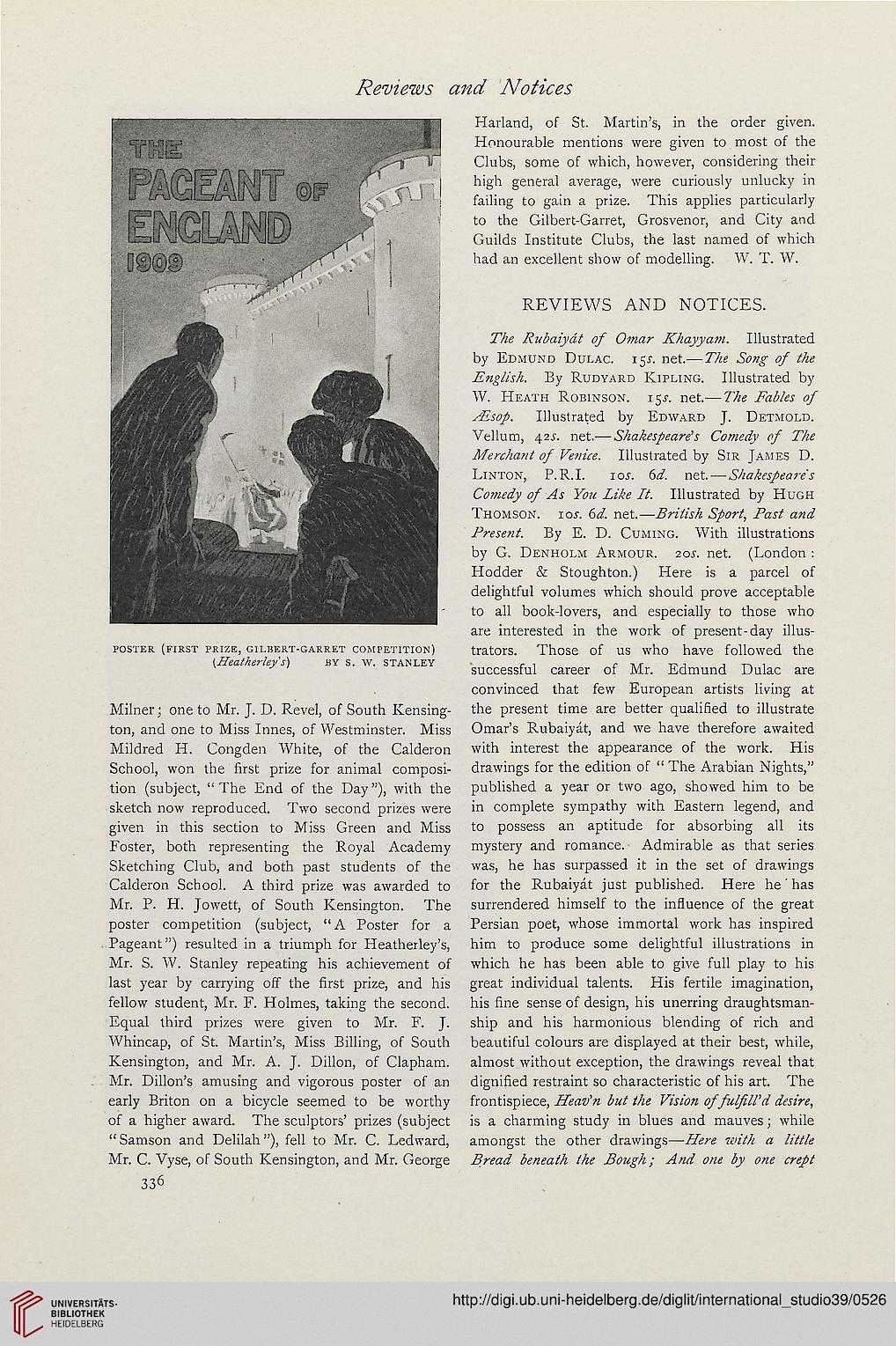 Milner; one to Mr. J. D. Revel, of South Kensing-
ton, and one to Miss Innes, of Westminster. Miss
Mildred H. Congden White, of the Calderon
School, won the first prize for animal composi-
tion (subject, " The End of the Day"), with the
sketch now reproduced. Two second prizes were
given in this section to Miss Green and Miss
Foster, both representing the Royal Academy
Sketching Club, and both past students of the
Calderon School. A third prize was awarded to
Mr. P. H. Jowett, of South Kensington. The
poster competition (subject, "A Poster for a
Pageant") resulted in a triumph for Heatherley's,
Mr. S. W. Stanley repeating his achievement of
last year by carrying off the first prize, and his
fellow student, Mr. F. Holmes, taking the second.
Equal third prizes were given to Mr. F. J.
Whincap, of St. Martin's, Miss Billing, of South
Kensington, and Mr. A. J. Dillon, of Clapham.
Mr. Dillon's amusing and vigorous poster of an
early Briton on a bicycle seemed to be worthy
of a higher award. The sculptors' prizes (subject
"Samson and Delilah"), fell to Mr. C. Ledward,
Mr. C. Vyse, of South Kensington, and Mr. George

Harland, of St. Martin's, in the order given.
Honourable mentions were given to most of the
Clubs, some of which, however, considering their
high general average, were curiously unlucky in
failing to gain a prize. This applies particularly
to the Gilbert-Garret, Grosvenor, and City and
Guilds Institute Clubs, the last named of which
had an excellent show of modelling. W. T. W.

The Rubaiydt of Omar Khayyam. Illustrated
by Edmund Dulac. i$s. net.— The Song of the
English. By Rudyard Kipling. Illustrated by
W. Heath Robinson. 15^. net.— The Fables of
sEsop. Illustrated by Edward J. Detmold.
Vellum, \2s. net.— Shakespeare's Comedy of The
Merchant of Venice. Illustrated by Sir James D.
Linton, P.R.I. 10s. 6d. net. — Shakespeare's
Comedy of As You Like It. Illustrated by Hugh
Thomson. t.os. 6d. net.—British Sport, Past and
Present. By E. D. Cuming. With illustrations
by G. Denholm Armour. 20j. net. (London :
Hodder & Stoughton.) Here is a parcel of
delightful volumes which should prove acceptable
to all book-lovers, and especially to those who
are interested in the work of present-day illus-
trators. Those of us who have followed the
successful career of Mr. Edmund Dulac are
convinced that few European artists living at
the present time are better qualified to illustrate
Omar's Rubaiyat, and we have therefore awaited
with interest the appearance of the work. His
drawings for the edition of " The Arabian Nights,"
published a year or two ago, showed him to be
in complete sympathy with Eastern legend, and
to possess an aptitude for absorbing all its
mystery and romance. Admirable as that series
was, he has surpassed it in the set of drawings
for the Rubaiyat just published. Here he' has
surrendered himself to the influence of the great
Persian poet, whose immortal work has inspired
him to produce some delightful illustrations in
which he has been able to give full play to his
great individual talents. His fertile imagination,
his fine sense of design, his unerring draughtsman-
ship and his harmonious blending of rich and
beautiful colours are displayed at their best, while,
almost without exception, the drawings reveal that
dignified restraint so characteristic of his art. The
frontispiece, Heav'n but the Vision of fulfill'd desire,
is a charming study in blues and mauves; while
amongst the other drawings—Here with a little
Bread beneath the Bough; And one by one crept