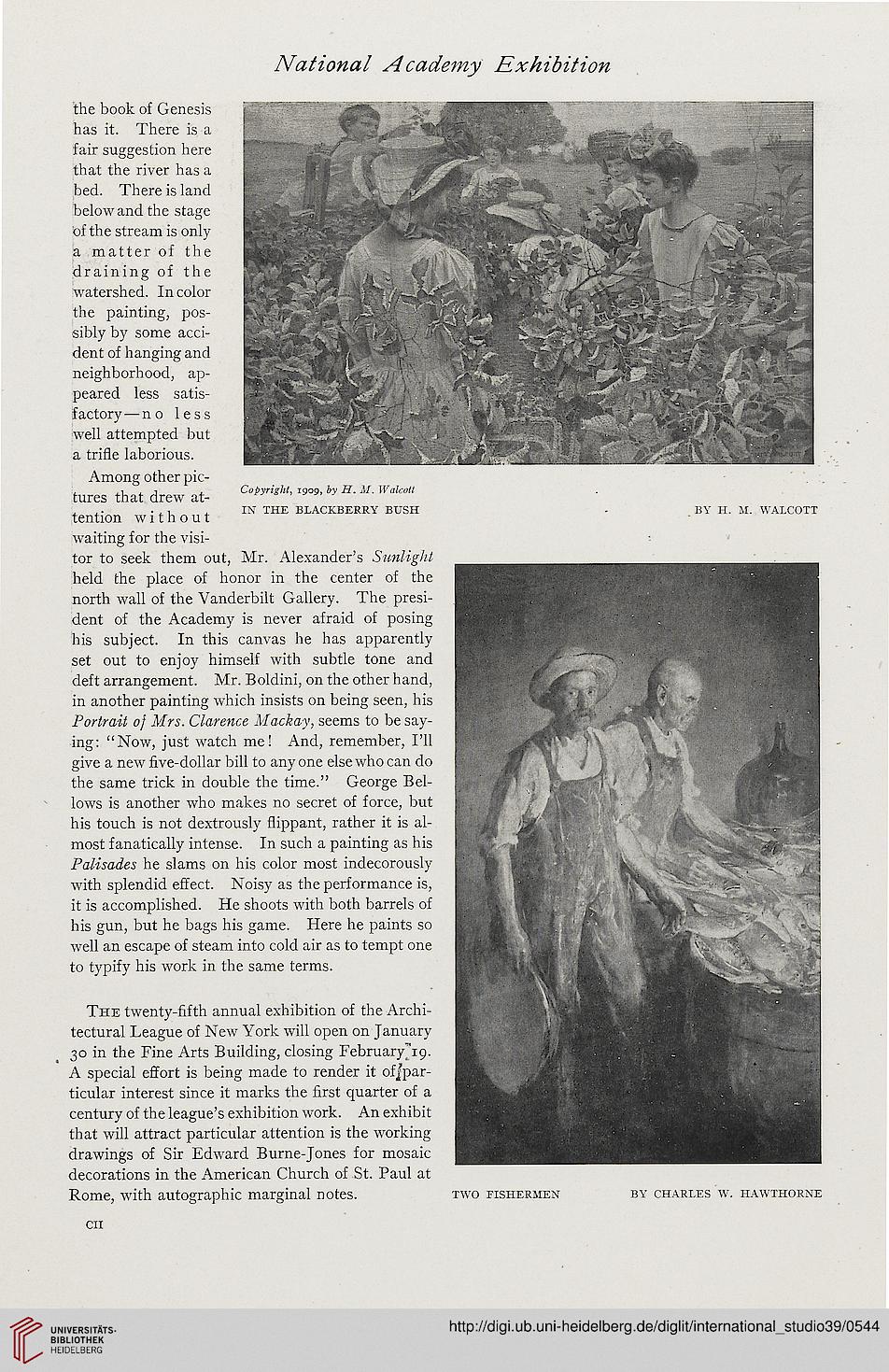 the book of Genesis
has it. There is a
fair suggestion here
that the river has a
bed. There is land
below and the stage
of the stream is only
a matter of the
draining of the
watershed. In color
the painting, pos-
sibly by some acci-
dent of hanging and
neighborhood, ap-
peared less satis-
factory— no less
well attempted but
a trifle laborious.

tention without ra the blackberry bush . . by h. vL walcott

waiting for the visi-
tor to seek them out, Mr. Alexander's Sunlight
held the place of honor in the center of the
north wall of the Vanderbilt Gallery. The presi-
dent of the Academy is never afraid of posing
his subject. In this canvas he has apparently
set out to enjoy himself with subtle tone and
deft arrangement. Mr. Boldini, on the other hand,
in another painting which insists on being seen, his
Portrait oj Mrs. Clarence Mackay, seems to be say-
ing: "Now, just watch me! And, remember, I'll
give a new five-dollar bill to any one else who can do
the same trick in double the time." George Bel-
lows is another who makes no secret of force, but
his touch is not dextrously flippant, rather it is al-
most fanatically intense. In such a painting as his
Palisades he slams on his color most indecorously
with splendid effect. Noisy as the performance is,
it is accomplished. He shoots with both barrels of
his gun, but he bags his game. Here he paints so
well an escape of steam into cold air as to tempt one
to typify his work in the same terms.

The twenty-fifth annual exhibition of the Archi-
tectural League of New York will open on January
30 in the Fine Arts Building, closing February^.
A special effort is being made to render it of/par-
ticular interest since it marks the first quarter of a
century of the league's exhibition work. An exhibit
that will attract particular attention is the working
drawings of Sir Edward Burne-Jones for mosaic
decorations in the American Church of St. Paul at
Rome, with autographic marginal notes. two fishermen by charles w. hawthorne