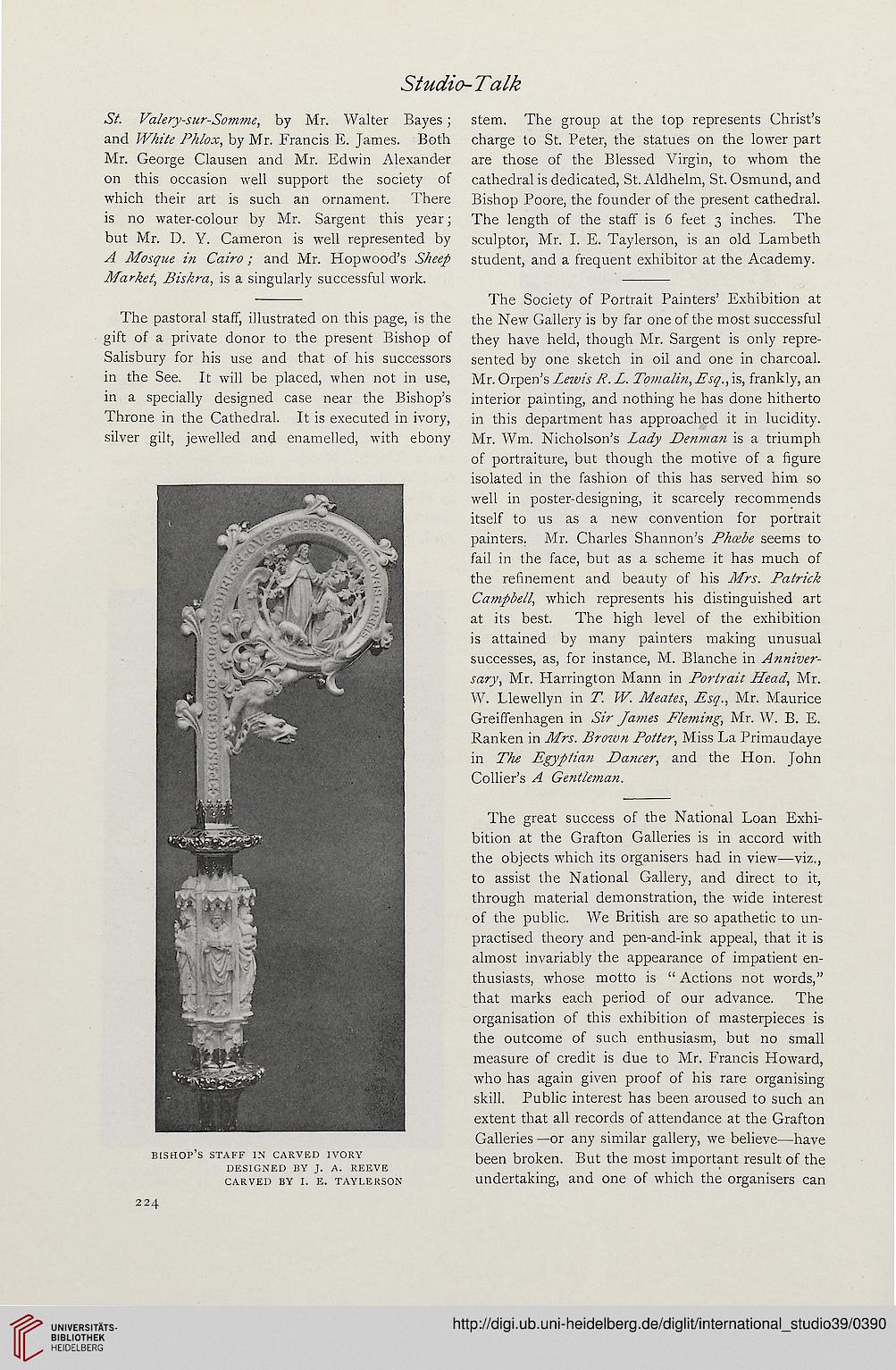 St. Valery-sur-Somme, by Mr. Walter Bayes ;
and White Phlox, by Mr. Francis E. James. Both
Mr. George Clausen and Mr. Edwin Alexander
on this occasion well support the society of
which their art is such an ornament. There
is no water-colour by Mr. Sargent this ye3r;
but Mr. D. Y. Cameron is well represented by
A Mosque in Cairo; and Mr. Hopwood's Sheep
Market, Biskra, is a singularly successful work.

The pastoral staff, illustrated on this page, is the
gift of a private donor to the present Bishop of
Salisbury for his use and that of his successors
in the See. It will be placed, when not in use,
in a specially designed case near the Bishop's
Throne in the Cathedral. It is executed in ivory,
silver gilt, jewelled and enamelled, with ebony

designed by j. a. reeve
carved by i. e. taylers0n

stem. The group at the top represents Christ's
charge to St. Peter, the statues on the lower part
are those of the Blessed Virgin, to whom the
cathedral is dedicated, St. Aldhelm, St. Osmund, and
Bishop Poore, the founder of the present cathedral.
The length of the staff is 6 feet 3 inches. The
sculptor, Mr. I. E. Taylerson, is an old Lambeth
student, and a frequent exhibitor at the Academy.

The Society of Portrait Painters' Exhibition at
the New Gallery is by far one of the most successful
they have held, though Mr. Sargent is only repre-
sented by one sketch in oil and one in charcoal.
Mr. Orpen's Lewis R. L. Tomalin, Esq., is, frankly, an
interior painting, and nothing he has done hitherto
in this department has approached it in lucidity.
Mr. Win. Nicholson's Lady Denman is a triumph
of portraiture, but though the motive of a figure
isolated in the fashion of this has served him so
well in poster-designing, it scarcely recommends
itself to us as a new convention for portrait
painters. Mr. Charles Shannon's Phoebe seems to
fail in the face, but as a scheme it has much of
the refinement and beauty of his Mrs. Patrick
Campbell, which represents his distinguished art
at its best. The high level of the exhibition
is attained by many painters making unusual
successes, as, for instance, M. Blanche in Anniver-
sary, Mr. Harrington Mann in Portrait Head, Mr.
W. Llewellyn in T. W. Meates, Esq., Mr. Maurice
Greiffenhagen in Sir James Fleming, Mr. W. B. E.
Ranken in Mrs. Brown Potter, Miss La Primaudaye
in The Egyptian Dancer, and the Hon. John
Collier's A Gentle?nan.

The great success of the National Loan Exhi-
bition at the Grafton Galleries is in accord with
the objects which its organisers had in view—viz.,
to assist the National Gallery, and direct to it,
through material demonstration, the wide interest
of the public. We British are so apathetic to un-
practised theory and pen-and-ink appeal, that it is
almost invariably the appearance of impatient en-
thusiasts, whose motto is " Actions not words,"
that marks each period of our advance. The
organisation of this exhibition of masterpieces is
the outcome of such enthusiasm, but no small
measure of credit is due to Mr. Francis Howard,
who has again given proof of his rare organising
skill. Public interest has been aroused to such an
extent that all records of attendance at the Grafton
Galleries —or any similar gallery, we believe—have
been broken. But the most important result of the
undertaking, and one of which the organisers can