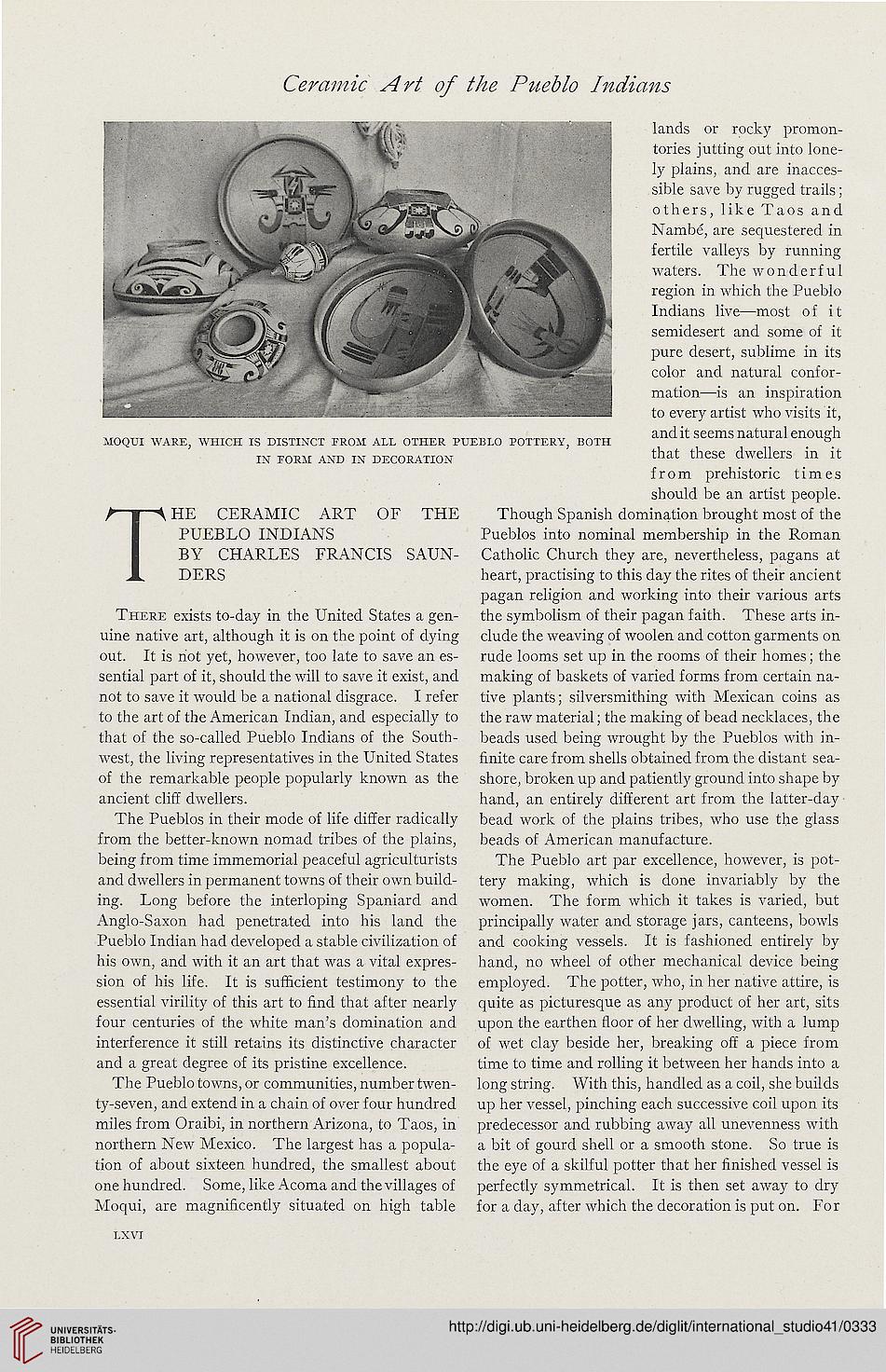 Information about OCR text
Ceramic Art of the Pueblo Indians

lands or rocky promon-
tories jutting out into lone-
ly plains, and are inacces-
sible save by rugged trails;
others, like Taos and
Nambe, are sequestered in
fertile valleys by running
waters. The wonderful
region in which the Pueblo
Indians live—most of it
semidesert and some of it
pure desert, sublime in its
color and natural confor-
mation—is an inspiration
to every artist who visits it,

moqui ware, which is distinct from all other pueblo pottery, both and it seems natural enough

in form and in decoration that these dwellers in it

from prehistoric times
should be an artist people.

PUEBLO INDIANS Pueblos into nominal membership in the Roman

BY CHARLES FRANCIS SAUN- Catholic Church they are, nevertheless, pagans at

DERS heart, practising to this day the rites of their ancient

pagan religion and working into their various arts
There exists to-day in the United States a gen- the symbolism of their pagan faith. These arts in-
uine native art, although it is on the point of dying elude the weaving of woolen and cotton garments on
out. It is riot yet, however, too late to save an es- rude looms set up in the rooms of their homes; the
sential part of it, should the will to save it exist, and making of baskets of varied forms from certain na-
not to save it would be a national disgrace. I refer tive plants; silversmithing with Mexican coins as
to the art of the American Indian, and especially to the raw material; the making of bead necklaces, the
that of the so-called Pueblo Indians of the South- beads used being wrought by the Pueblos with in-
west, the living representatives in the United States finite care from shells obtained from the distant sea-
of the remarkable people popularly known as the shore, broken up and patiently ground into shape by
ancient cliff dwellers. hand, an entirely different art from the latter-day
The Pueblos in their mode of life differ radically bead work of the plains tribes, who use the glass
from the better-known nomad tribes of the plains, beads of American manufacture,
being from time immemorial peaceful agriculturists The Pueblo art par excellence, however, is pot-
and dwellers in permanent towns of their own build- tery making, which is done invariably by the
ing. Long before the interloping Spaniard and women. The form which it takes is varied, but
Anglo-Saxon had penetrated into his land the principally water and storage jars, canteens, bowls
Pueblo Indian had developed a stable civilization of and cooking vessels. It is fashioned entirely by
his own, and with it an art that was a vital expres- hand, no wheel of other mechanical device being
sion of his life. It is sufficient testimony to the employed. The potter, who, in her native attire, is
essential virility of this art to find that after nearly quite as picturesque as any product of her art, sits
four centuries of the white man's domination and upon the earthen floor of her dwelling, with a lump
interference it still retains its distinctive character of wet clay beside her, breaking off a piece from
and a great degree of its pristine excellence. time to time and rolling it between her hands into a
The Pueblo towns, or communities, number twen- long string. With this, handled as a coil, she builds
ty-seven, and extend in a chain of over four hundred up her vessel, pinching each successive coil upon its
miles from Oraibi, in northern Arizona, to Taos, in predecessor and rubbing away all unevenness with
northern New Mexico. The largest has a popula- a bit of gourd shell or a smooth stone. So true is
tion of about sixteen hundred, the smallest about the eye of a skilful potter that her finished vessel is
one hundred. Some, like Acoma and the villages of perfectly symmetrical. It is then set away to dry
Moqui, are magnificently situated on high table for a day, after which the decoration is put on. For