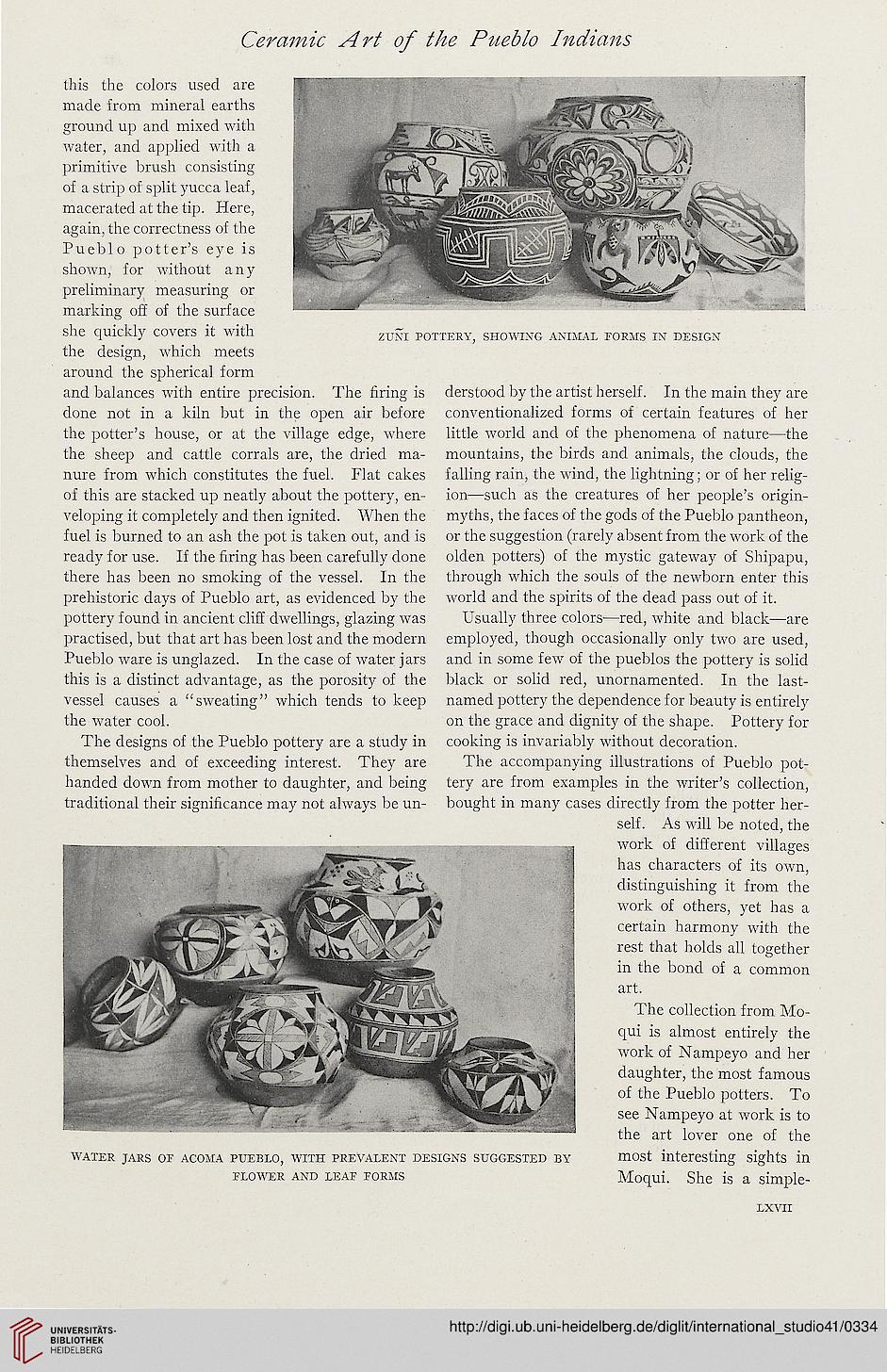 Information about OCR text
Ceramic Art of the Pueblo Indians

this the colors used are
made from mineral earths
ground up and mixed with
water, and applied with a
primitive brush consisting
of a strip of split yucca leaf,
macerated at the tip. Here,
again, the correctness of the
Pueblo potter's eye is
shown, for without any
preliminary measuring or
marking off of the surface
she quickly covers it with zuj?r pottery, showing animal forms in design

the design, which meets
around the spherical form

and balances with entire precision. The firing is derstood by the artist herself. In the main they are
done not in a kiln but in the open air before conventionalized forms of certain features of her
the potter's house, or at the village edge, where little world and of the phenomena of nature—the
the sheep and cattle corrals are, the dried ma- mountains, the birds and animals, the clouds, the
nure from which constitutes the fuel. Flat cakes falling rain, the wind, the lightning; or of her relig-
of this are stacked up neatly about the pottery, en- ion—such as the creatures of her people's origin-
veloping it completely and then ignited. When the myths, the faces of the gods of the Pueblo pantheon,
fuel is burned to an ash the pot is taken out, and is or the suggestion (rarely absent from the work of the
ready for use. If the firing has been carefully done olden potters) of the mystic gateway of Shipapu,
there has been no smoking of the vessel. In the through which the souls of the newborn enter this
prehistoric days of Pueblo art, as evidenced by the world and the spirits of the dead pass out of it.
pottery found in ancient cliff dwellings, glazing was Usually three colors—red, white and black—are
practised, but that art has been lost and the modern employed, though occasionally only two are used,
Pueblo ware is unglazed. In the case of water jars and in some few of the pueblos the pottery is solid
this is a distinct advantage, as the porosity of the black or solid red, unornamented. In the last-
vessel causes a "sweating" which tends to keep named pottery the dependence for beauty is entirely
the water cool. on the grace and dignity of the shape. Pottery for

The designs of the Pueblo pottery are a study in cooking is invariably without decoration,
themselves and of exceeding interest. They are The accompanying illustrations of Pueblo pot-
handed down from mother to daughter, and being tery are from examples in the writer's collection,
traditional their significance may not always be un- bought in many cases directly from the potter her-
self. As will be noted, the
work of different villages
has characters of its own,
distinguishing it from the
work of others, yet has a
certain harmony with the
rest that holds all together
in the bond of a common
art.

The collection from Mo-
qui is almost entirely the
work of Nampeyo and her
daughter, the most famous
of the Pueblo potters. To
see Nampeyo at work is to
the art lover one of the
water jars of acoma pueblo, with prevalent designs suggested by most interesting sights in
flower and leaf forms Moqui. She is a simple-