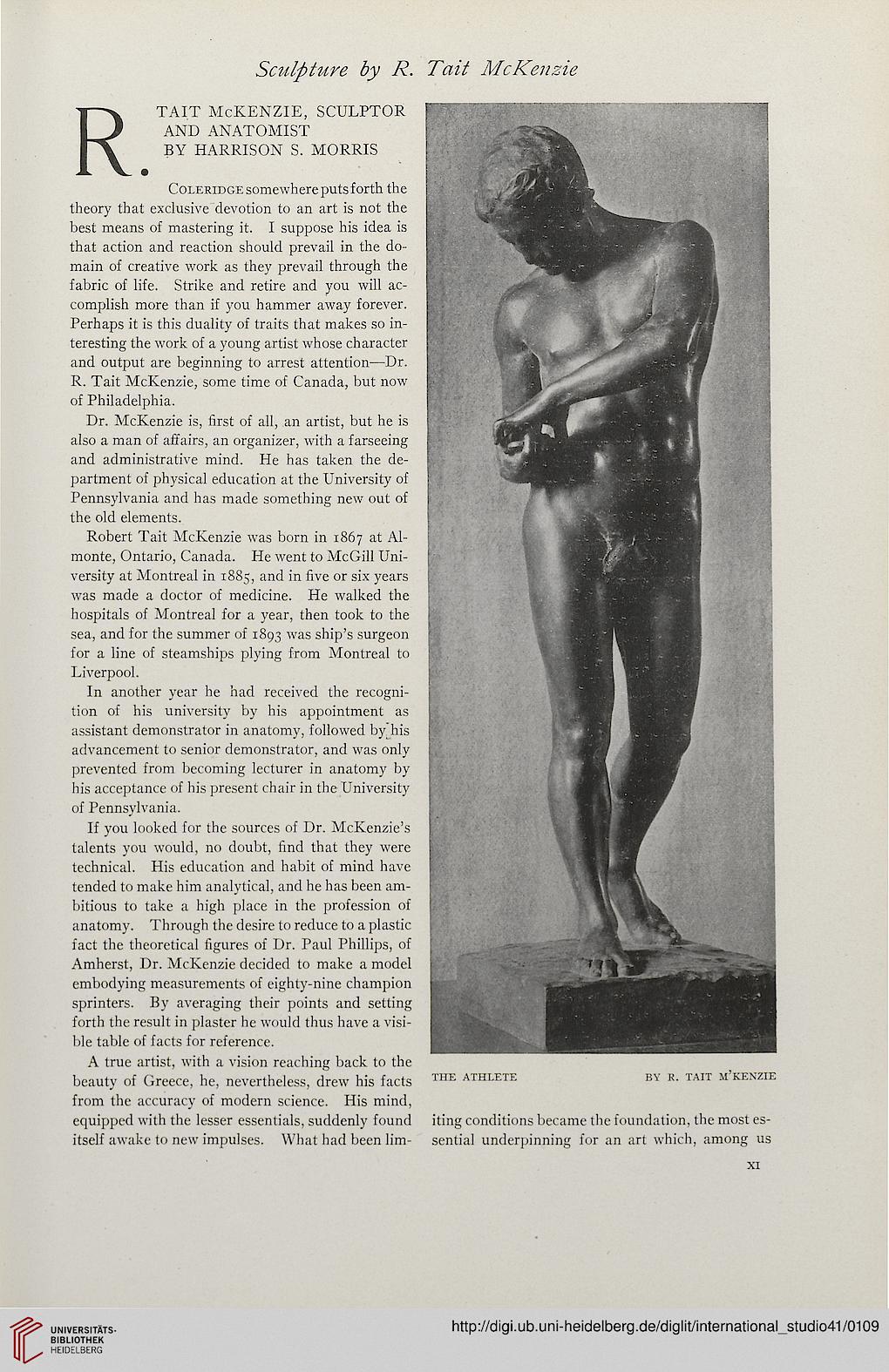 Coleridge somewhere puts forth the
theory that exclusive devotion to an art is not the
best means of mastering it. I suppose his idea is
that action and reaction should prevail in the do-
main of creative work as they prevail through the
fabric of life. Strike and retire and you will ac-
complish more than if you hammer away forever.
Perhaps it is this duality of traits that makes so in-
teresting the work of a young artist whose character
and output are beginning to arrest attention—Dr.
R. Tait McKenzie, some time of Canada, but now
of Philadelphia.

Dr. McKenzie is, first of all, an artist, but he is
also a man of affairs, an organizer, with a farseeing
and administrative mind. He has taken the de-
partment of physical education at the University of
Pennsylvania and has made something new out of
the old elements.

Robert Tait McKenzie was born in 1867 at Al-
monte, Ontario, Canada. He went to McGill Uni-
versity at Montreal in 1885, and in five or six years
was made a doctor of medicine. He walked the
hospitals of Montreal for a year, then took to the
sea, and for the summer of 1893 was ship's surgeon
for a line of steamships plying from Montreal to
Liverpool.

In another year he had received the recogni-
tion of his university by his appointment as
assistant demonstrator in anatomy, followed by his
advancement to senior demonstrator, and was only
prevented from becoming lecturer in anatomy by
his acceptance of his present chair in the University
of Pennsylvania.

If you looked for the sources of Dr. McKenzie's
talents you would, no doubt, find that they were
technical. His education and habit of mind have
tended to make him analytical, and he has been am-
bitious to take a high place in the profession of
anatomy. Through the desire to reduce to a plastic
fact the theoretical figures of Dr. Paul Phillips, of
Amherst, Dr. McKenzie decided to make a model
embodying measurements of eighty-nine champion
sprinters. By averaging their points and setting
forth the result in plaster he would thus have a visi-
ble table of facts for reference.

A true artist, with a vision reaching back to the
beauty of Greece, he, nevertheless, drew his facts
from the accuracy of modern science. His mind,
equipped with the lesser essentials, suddenly found
itself awake to new impulses. What had been lim-

THE ATHLETE BY R. TAIT M'KENZIE

iting conditions became the foundation, the most es-
sential underpinning for an art which, among us