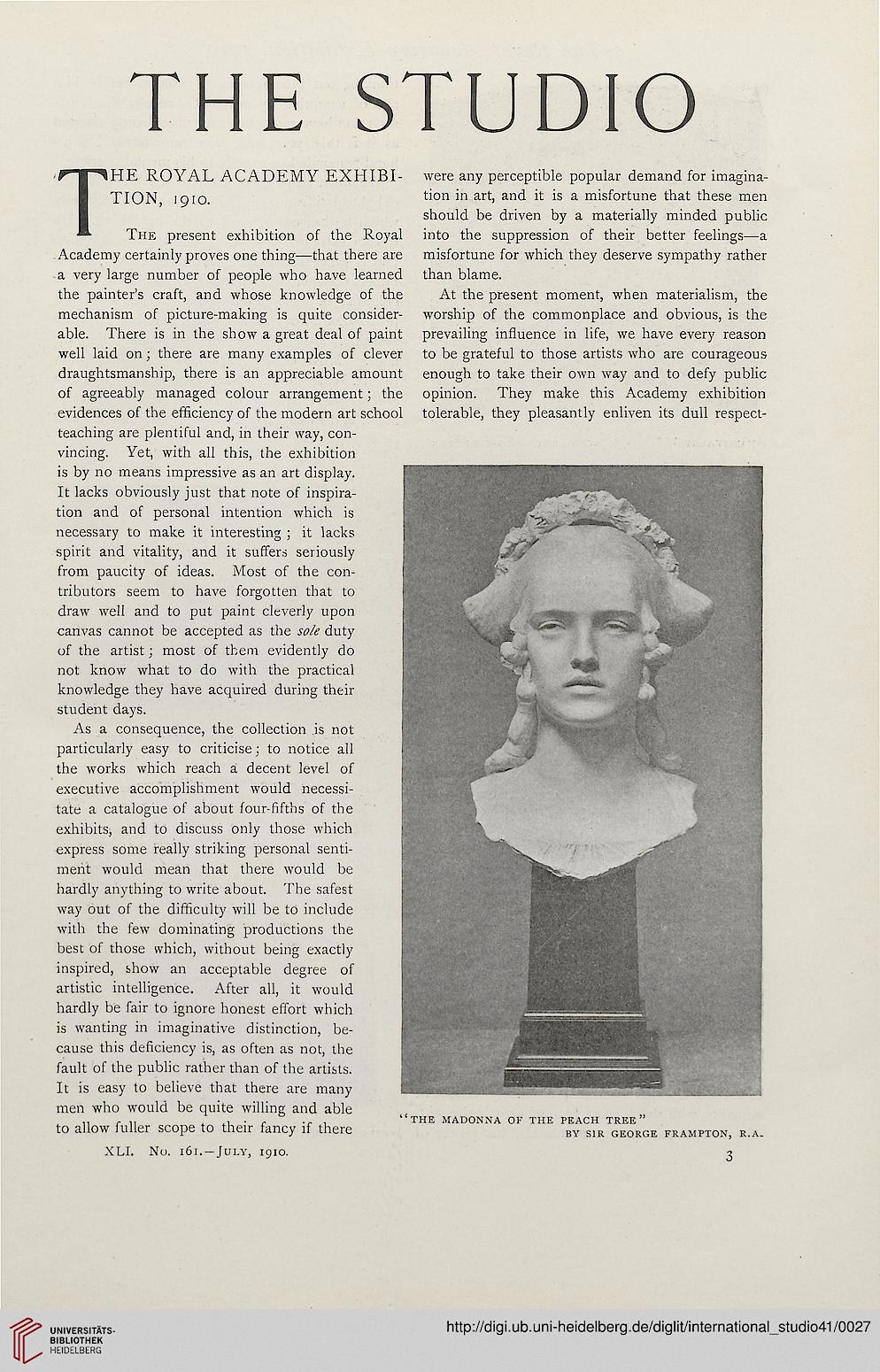 THE ROYAL ACADEMY EXHIBI- were any perceptible popular demand for imagina-
XION, 1910. ti°n m art> an(^ it ls a misfortune that these men

should be driven by a materially minded public
The present exhibition of the Royal into the suppression of their better feelings—a
Academy certainly proves one thing—that there are misfortune for which they deserve sympathy rather
a very large number of people who have learned than blame.

the painter's craft, and whose knowledge of the At the present moment, when materialism, the
mechanism of picture-making is quite consider- worship of the commonplace and obvious, is the
able. There is in the show a great deal of paint prevailing influence in life, we have every reason
well laid on ; there are many examples of clever to be grateful to those artists who are courageous
draughtsmanship, there is an appreciable amount enough to take their own way and to defy public
of agreeably managed colour arrangement; the opinion. They make this Academy exhibition
evidences of the efficiency of the modern art school tolerable, they pleasantly enliven its dull respect-
teaching are plentiful and, in their way, con-
vincing. Yet, with all this, the exhibition
is by no means impressive as an art display.
It lacks obviously just that note of inspira-
tion and of personal intention which is
necessary to make it interesting ; it lacks
spirit and vitality, and it suffers seriously
from paucity of ideas. Most of the con-
tributors seem to have forgotten that to
draw well and to put paint cleverly upon
canvas cannot be accepted as the sole duty
of the artist; most of them evidently do
not know what to do with the practical
knowledge they have acquired during their
student days.

As a consequence, the collection is not
particularly easy to criticise; to notice all
the works which reach a decent level of
executive accomplishment would necessi-
tate a catalogue of about four fifths of the
exhibits, and to discuss only those which
express some really striking personal senti-
ment would mean that there would be
hardly anything to write about. The safest
way out of the difficulty will be to include
with the few dominating productions the
best of those which, without being exactly
inspired, show an acceptable degree of
artistic intelligence. After all, it would
hardly be fair to ignore honest effort which
is wanting in imaginative distinction, be-
cause this deficiency is, as often as not, the
fault of the public rather than of the artists.
It is easy to believe that there are many
men who would be quite willing and able
to allow fuller scope to their fancy if there
XLI. No. 161. —July, 1910.

:the madonna of the peach tree "