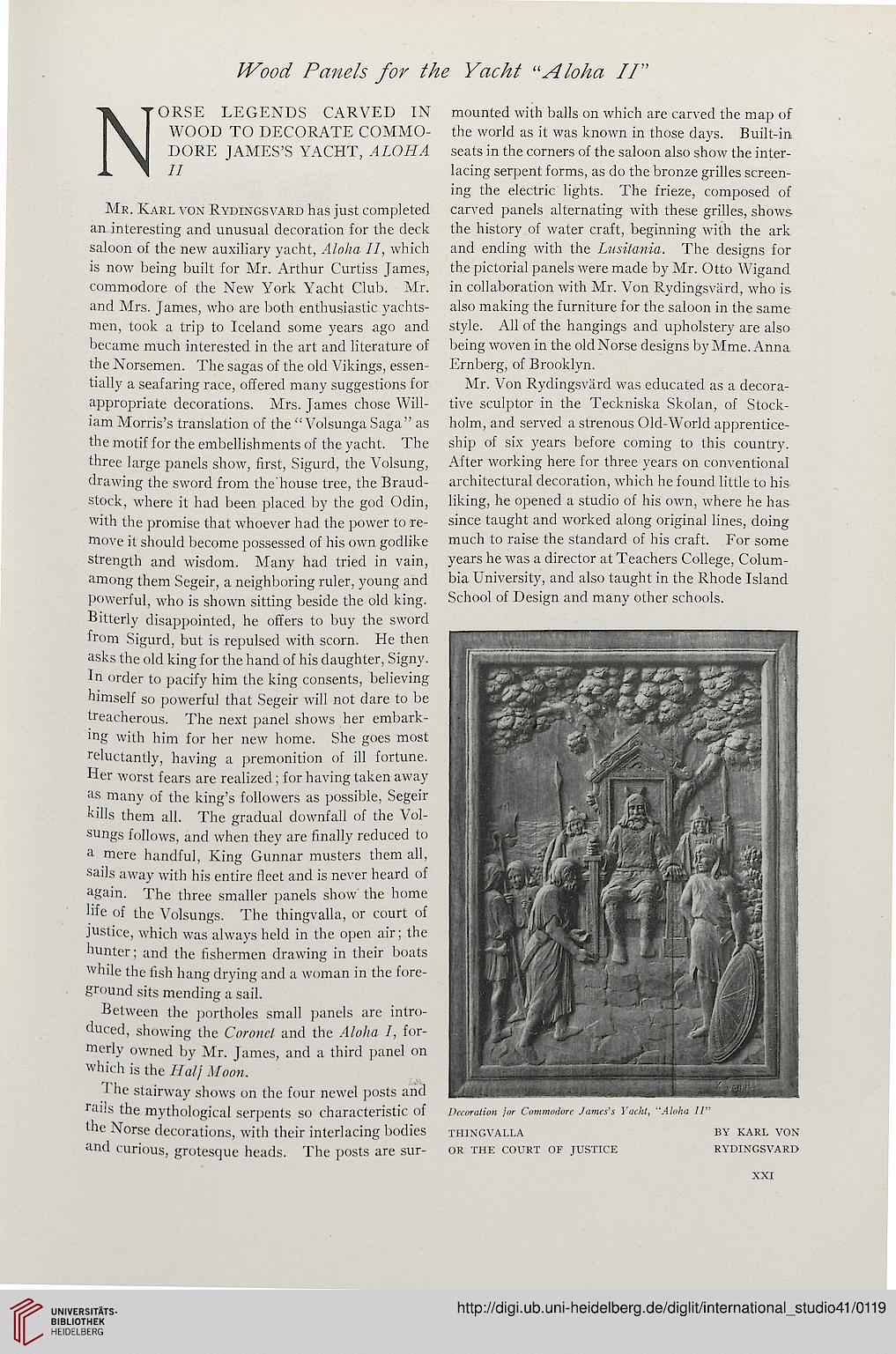 Mr. Karl von Rydingsvard has just completed
an interesting and unusual decoration for the deck
saloon of the new auxiliary yacht, Aloha II, which
is now being built for Mr. Arthur Curtiss James,
commodore of the New York Yacht Club. Mr.
and Mrs. James, who are both enthusiastic yachts-
men, took a trip to Iceland some years ago and
became much interested in the art and literature of
the Norsemen. The sagas of the old Vikings, essen-
tially a seafaring race, offered many suggestions for
appropriate decorations. Mrs. James chose Will-
iam Morris's translation of the " Volsunga Saga" as
the motif for the embellishments of the yacht. The
three large panels show, first, Sigurd, the Volsung,
drawing the sword from the'house tree, the Braud-
stock, where it had been placed by the god Odin,
with the promise that whoever had the power to re-
move it should become possessed of his own godlike
strength and wisdom. Many had tried in vain,
among them Segeir, a neighboring ruler, young and
powerful, who is shown sitting beside the old king.
Bitterly disappointed, he offers to buy the sword
from Sigurd, but is repulsed with scorn. He then
asks the old king for the hand of his daughter, Signy.
In order to pacify him the king consents, believing
himself so powerful that Segeir will not dare to be
treacherous. The next panel shows her embark-
mg with him for her new home. She goes most
reluctantly, having a premonition of ill fortune.
Her worst fears are realized ; for having taken away
as many of the king's followers as possible, Segeir
kills them all. The gradual downfall of the Vol-
sungs follows, and when they are finally reduced to
a mere handful, King Gunnar musters them all.
sails away with his entire fleet and is never heard of
again. The three smaller panels show the home
life of the Volsungs. The thingvalla, or court of
justice, which was always held in the open air: the
hunter; and the fishermen drawing in their boats
While the fish hang drying and a woman in the fore-
ground sits mending a sail.

Between the portholes small panels are intro-
duced, showing the Coronet and the Aloha I, for-
merly owned by Mr. J times, and a third panel on
which is the Half Moon.

I he stairway shows on the four newel posts and
r&iis the mythological serpents so characteristic of
the Norse decorations, with their interlacing bodies
and curious, grotesque heads. The posts are sur-

mounted with balls on which are carved the map of
the world as it was known in those days. Built-in
seats in the corners of the saloon also show the inter-
lacing serpent forms, as do the bronze grilles screen-
ing the electric lights. The frieze, composed of
carved panels alternating with these grilles, shows
the history of water craft, beginning with the ark
and ending with the Lusitania. The designs for
the pictorial panels were made by Mr. Otto Wigand
in collaboration with Mr. Von Rydingsvard, who is-
also making the furniture for the saloon in the same
style. All of the hangings and upholstery are also
being woven in the old Norse designs by Mme. Anna
Ernberg, of Brooklyn.

Mr. Von Rydingsvard was educated as a decora-
tive sculptor in the Teckniska Skolan, of Stock-
holm, and served a strenous Old-World apprentice-
ship of six years before coming to this country.
After working here for three years on conventional
architectural decoration, which he found little to his
liking, he opened a studio of his own, where he has
since taught and worked along original lines, doing
much to raise the standard of his craft. For some
years he was a director at Teachers College, Colum-
bia University, and also taught in the Rhode Island
School of Design and many other schools.

or the court of justice rydingsvard