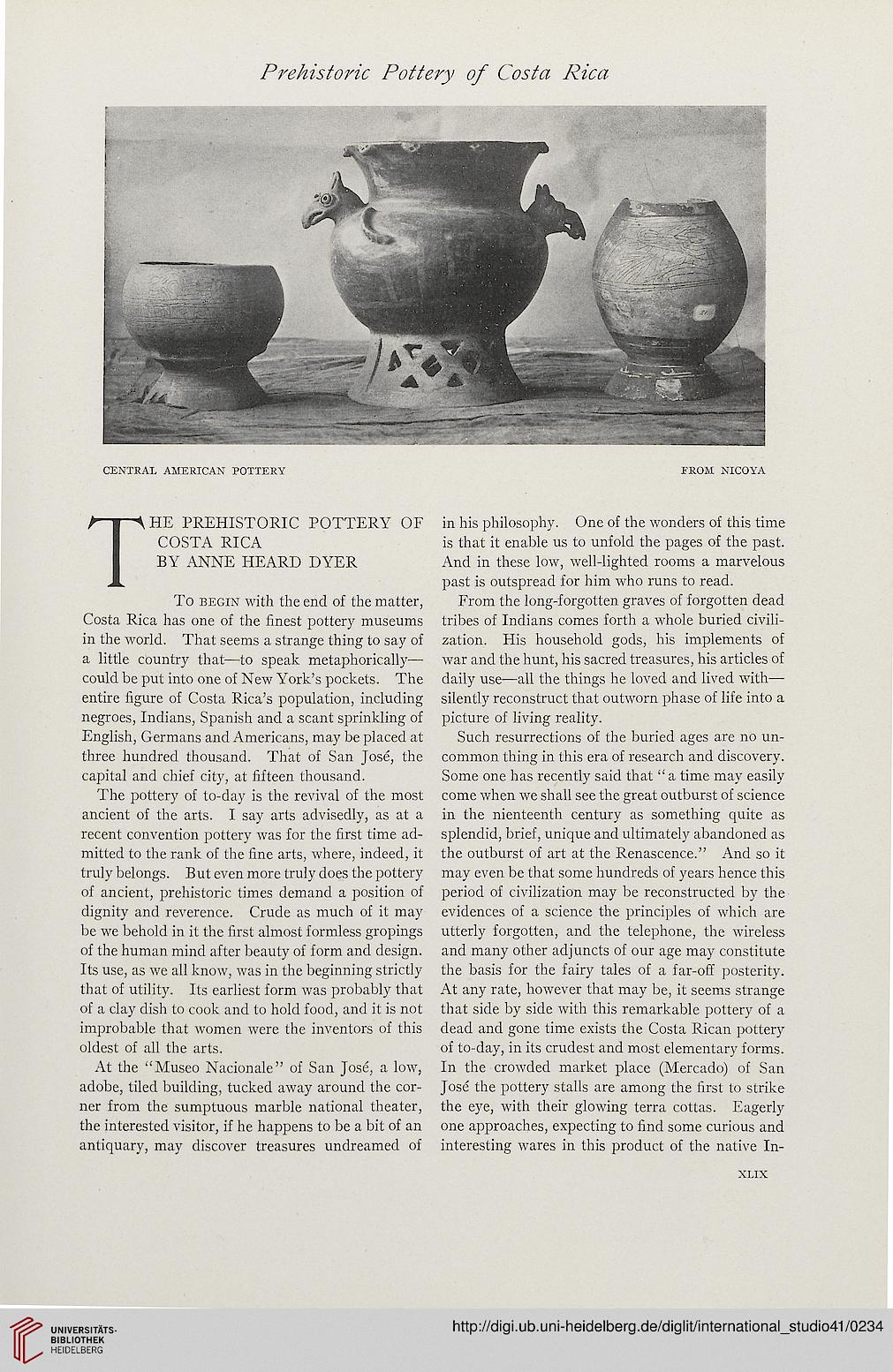 THE PREHISTORIC POTTERY OF in his philosophy. One of the wonders of this time

COSTA RICA is that it enable us to unfold the pages of the past.

BY ANNE HEARD DYER And in these low, well-lighted rooms a marvelous
past is outspread for him who runs to read.

To begin with the end of the matter, From the long-forgotten graves of forgotten dead

in the world. That seems a strange thing to say of zation. His household gods, his implements of

a little country that—to speak metaphorically— war and the hunt, his sacred treasures, his articles of

could be put into one of New York's pockets. The daily use—all the things he loved and lived with—

entire figure of Costa Rica's population, including silently reconstruct that outworn phase of life into a

negroes, Indians, Spanish and a scant sprinkling of picture of living reality.

English, Germans and Americans, may be placed at Such resurrections of the buried ages are no un-

three hundred thousand. That of San Jose, the common thing in this era of research and discovery,

capital and chief city, at fifteen thousand. Some one has recently said that "a time may easily

ancient of the arts. I say arts advisedly, as at a in the nienteenth century as something quite as

recent convention pottery was for the first time ad- splendid, brief, unique and ultimately abandoned as

mitted to the rank of the fine arts, where, indeed, it the outburst of art at the Renascence." And so it

truly belongs. But even more truly does the pottery may even be that some hundreds of years hence this

of ancient, prehistoric times demand a position of period of civilization may be reconstructed by the

dignity and reverence. Crude as much of it may evidences of a science the principles of which are

be we behold in it the first almost formless gropings utterly forgotten, and the telephone, the wireless

of the human mind after beauty of form and design, and many other adjuncts of our age may constitute

Its use, as we all know, was in the beginning strictly the basis for the fairy tales of a far-off posterity,

that of utility. Its earliest form was probably that At any rate, however that may be, it seems strange

of a clay dish to cook and to hold food, and it is not that side by side with this remarkable pottery of a

oldest of all the arts. of to-day, in its crudest and most elementary forms.

At the "Museo Nacionale" of San Jose, a low, In the crowded market place (Mercado) of San

adobe, tiled building, tucked away around the cor- Jose the pottery stalls are among the first to strike

ner from the sumptuous marble national theater, the eye, with their glowing terra cottas. Eagerly

the interested visitor, if he happens to be a bit of an one approaches, expecting to find some curious and

antiquary, may discover treasures undreamed of interesting wares in this product of the native In-