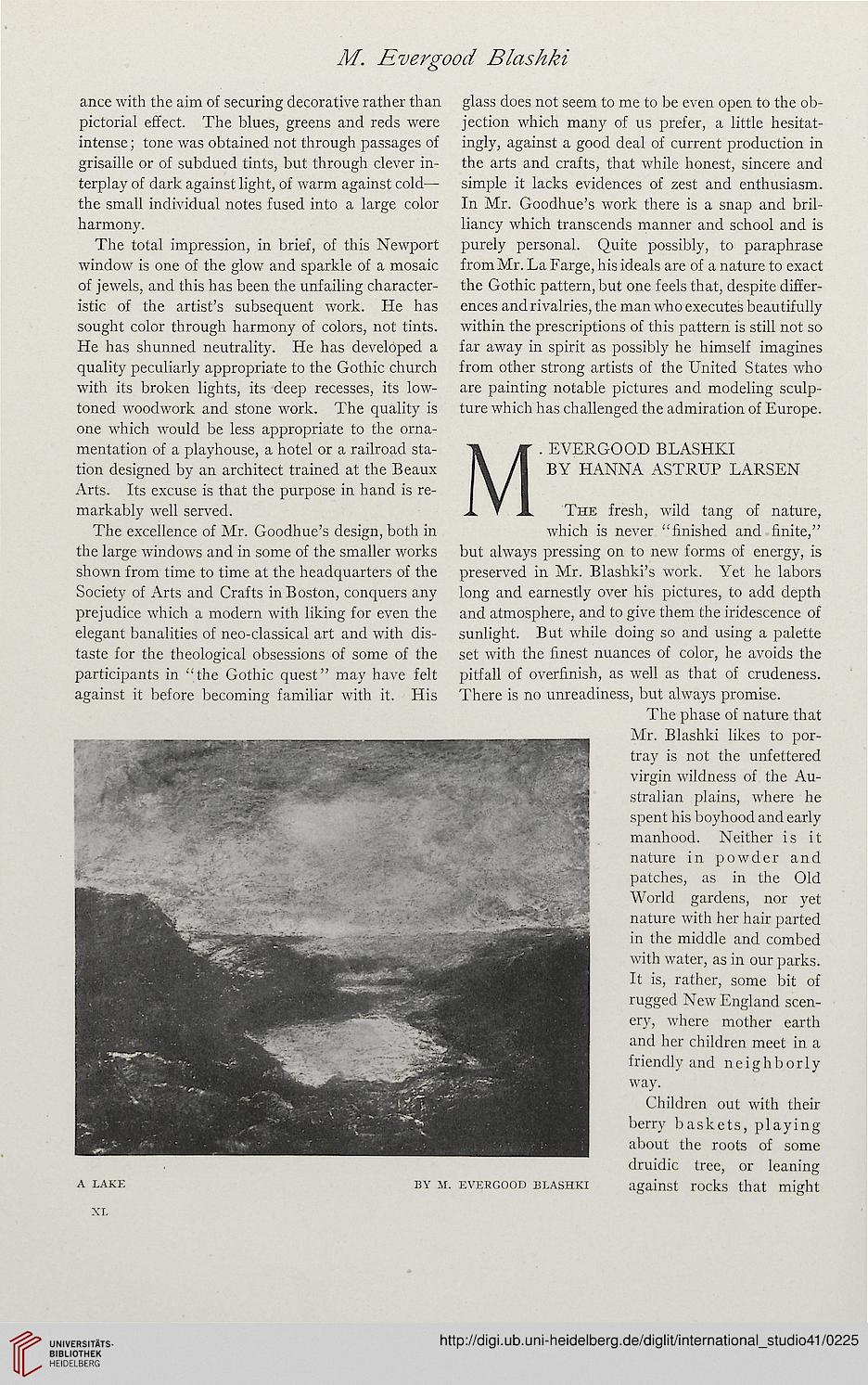 ance with the aim of securing decorative rather than glass does not seem to me to be even open to the ob-
pictorial effect. The blues, greens and reds were jection which many of us prefer, a little hesitat-
intense; tone was obtained not through passages of ingly, against a good deal of current production in
grisaille or of subdued tints, but through clever in- the arts and crafts, that while honest, sincere and
terplay of dark against light, of warm against cold— simple it lacks evidences of zest and enthusiasm,
the small individual notes fused into a large color In Mr. Goodhue's work there is a snap and bril-
harmony. liancy which transcends manner and school and is

The total impression, in brief, of this Newport purely personal. Quite possibly, to paraphrase
window is one of the glow and sparkle of a mosaic from Mr. La Farge, his ideals are of a nature to exact
of jewels, and this has been the unfailing character- the Gothic pattern, but one feels that, despite differ-
istic of the artist's subsequent work. He has ences and rivalries, the man who executes beautifully
sought color through harmony of colors, not tints, within the prescriptions of this pattern is still not so
He has shunned neutrality. He has developed a far away in spirit as possibly he himself imagines
quality peculiarly appropriate to the Gothic church from other strong artists of the United States who
with its broken lights, its deep recesses, its low- are painting notable pictures and modeling sculp-
toned woodwork and stone work. The quality is ture which has challenged the admiration of Europe,
one which would be less appropriate to the orna-
mentation of a playhouse, a hotel or a railroad sta- 'Tk IT . EVERGOOD BLASHKI
tion designed by an architect trained at the Beaux l\ /I BY HANNA ASTRUP LARSEN
Arts. Its excuse is that the purpose in hand is re- f \f I

The excellence of Mr. Goodhue's design, both in which is never "finished and finite,"

the large windows and in some of the smaller works but always pressing on to new forms of energy, is
shown from time to time at the headquarters of the preserved in Mr. Blashki's work. Yet he labors
Society of Arts and Crafts in Boston, conquers any long and earnestly over his pictures, to add depth
prejudice which a modern with liking for even the and atmosphere, and to give them the iridescence of
elegant banalities of neo-classical art and with dis- sunlight. But while doing so and using a palette
taste for the theological obsessions of some of the set with the finest nuances of color, he avoids the
participants in "the Gothic quest" may have felt pitfall of overfinish, as well as that of crudeness.
against it before becoming familiar with it. His There is no unreadiness, but always promise.

The phase of nature that
Mr. Blashki likes to por-
tray is not the unfettered
virgin wildness of the Au-
stralian plains, where he
spent his boyhood and early
manhood. Neither is it
nature in powder and
patches, as in the Old
World gardens, nor yet
nature with her hair parted
in the middle and combed
with water, as in our parks.
It is, rather, some bit of
rugged New England scen-
ery, where mother earth
and her children meet in a
friendly and neighborly
way.

Children out with their
berry baskets, playing
about the roots of some
druidic tree, or leaning
a lake by m. evergood blashki against rocks that might