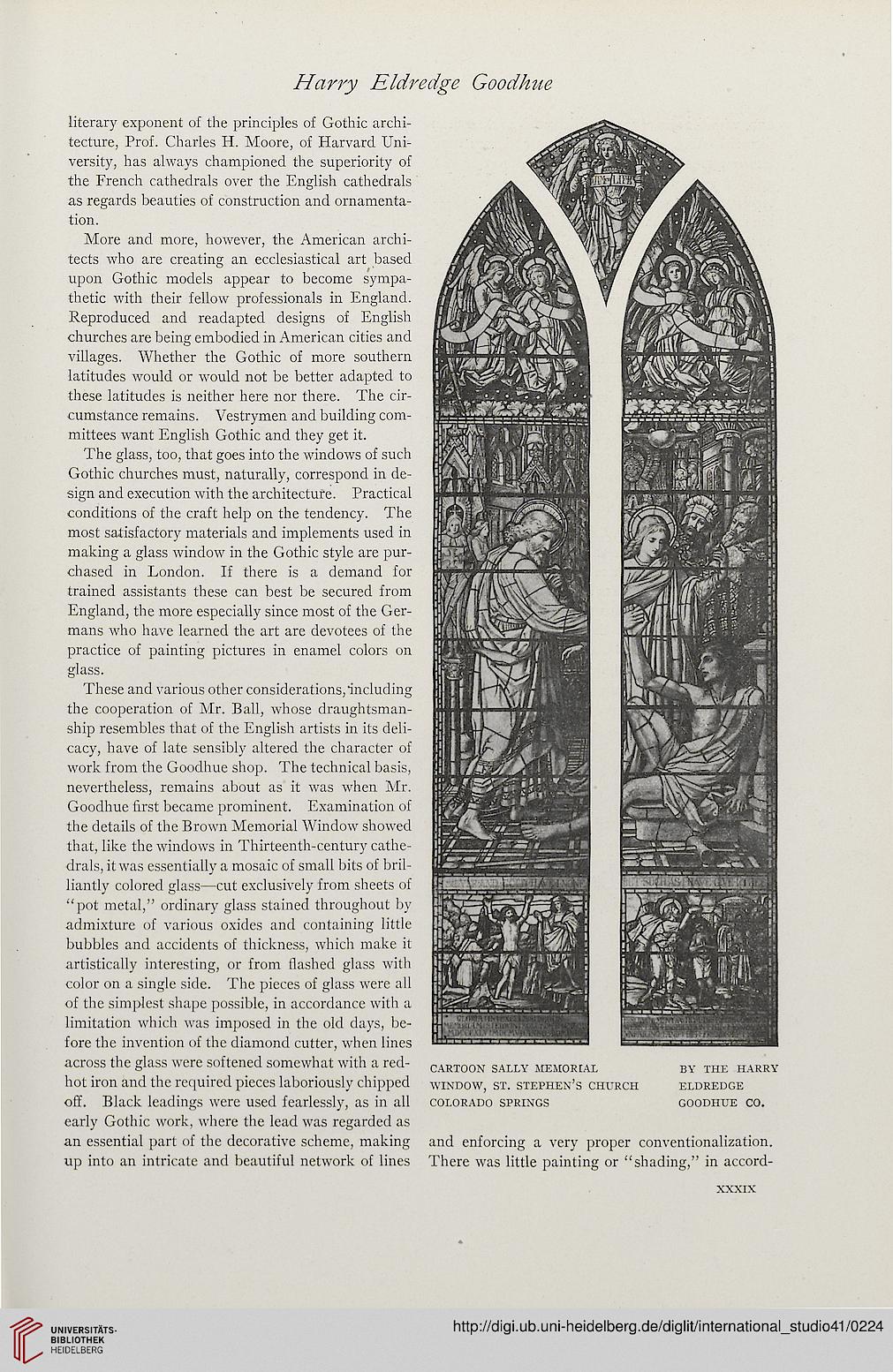 literary exponent of the principles of Gothic archi-
tecture, Prof. Charles H. Moore, of Harvard Uni-
versity, has always championed the superiority of
the French cathedrals over the English cathedrals
as regards beauties of construction and ornamenta-
tion.

More and more, however, the American archi-
tects who are creating an ecclesiastical art based
upon Gothic models appear to become sympa-
thetic with their fellow professionals in England.
Reproduced and readapted designs of English
churches are being embodied in American cities and
villages. Whether the Gothic of more southern
latitudes would or would not be better adapted to
these latitudes is neither here nor there. The cir-
cumstance remains. Vestrymen and building com-
mittees want English Gothic and they get it.

The glass, too, that goes into the windows of such
Gothic churches must, naturally, correspond in de-
sign and execution with the architecture. Practical
conditions of the craft help on the tendency. The
most satisfactory materials and implements used in
making a glass window in the Gothic style are pur-
chased in London. If there is a demand for
trained assistants these can best be secured from
England, the more especially since most of the Ger-
mans who have learned the art are devotees of the
practice of painting pictures in enamel colors on
glass.

These and various other considerations,"including
the cooperation of Mr. Ball, whose draughtsman-
ship resembles that of the English artists in its deli-
cacy, have of late sensibly altered the character of
work from the Goodhue shop. The technical basis,
nevertheless, remains about as it was when Mr.
Goodhue first became prominent. Examination of
the details of the Brown Memorial Window showed
that, like the windows in Thirteenth-century cathe-
drals, it was essentially a mosaic of small bits of bril-
liantly colored glass—cut exclusively from sheets of
"pot metal," ordinary glass stained throughout by
admixture of various oxides and containing little
bubbles and accidents of thickness, which make it
artistically interesting, or from Hashed glass with
color on a single side. The pieces of glass were all
of the simplest shape possible, in accordance with a
limitation which was imposed in the old days, be-
fore the invention of the diamond cutter, when lines
across the glass were softened somewhat with a red-
hot iron and the required pieces laboriously chipped
off. Black leadings were used fearlessly, as in all
early Gothic work, where the lead was regarded as
an essential part of the decorative scheme, making
up into an intricate and beautiful network of lines

CARTOON SALLY MEMORIAL BY THE HARRY

and enforcing a very proper conventionalization.
There was little painting or "shading," in accord-