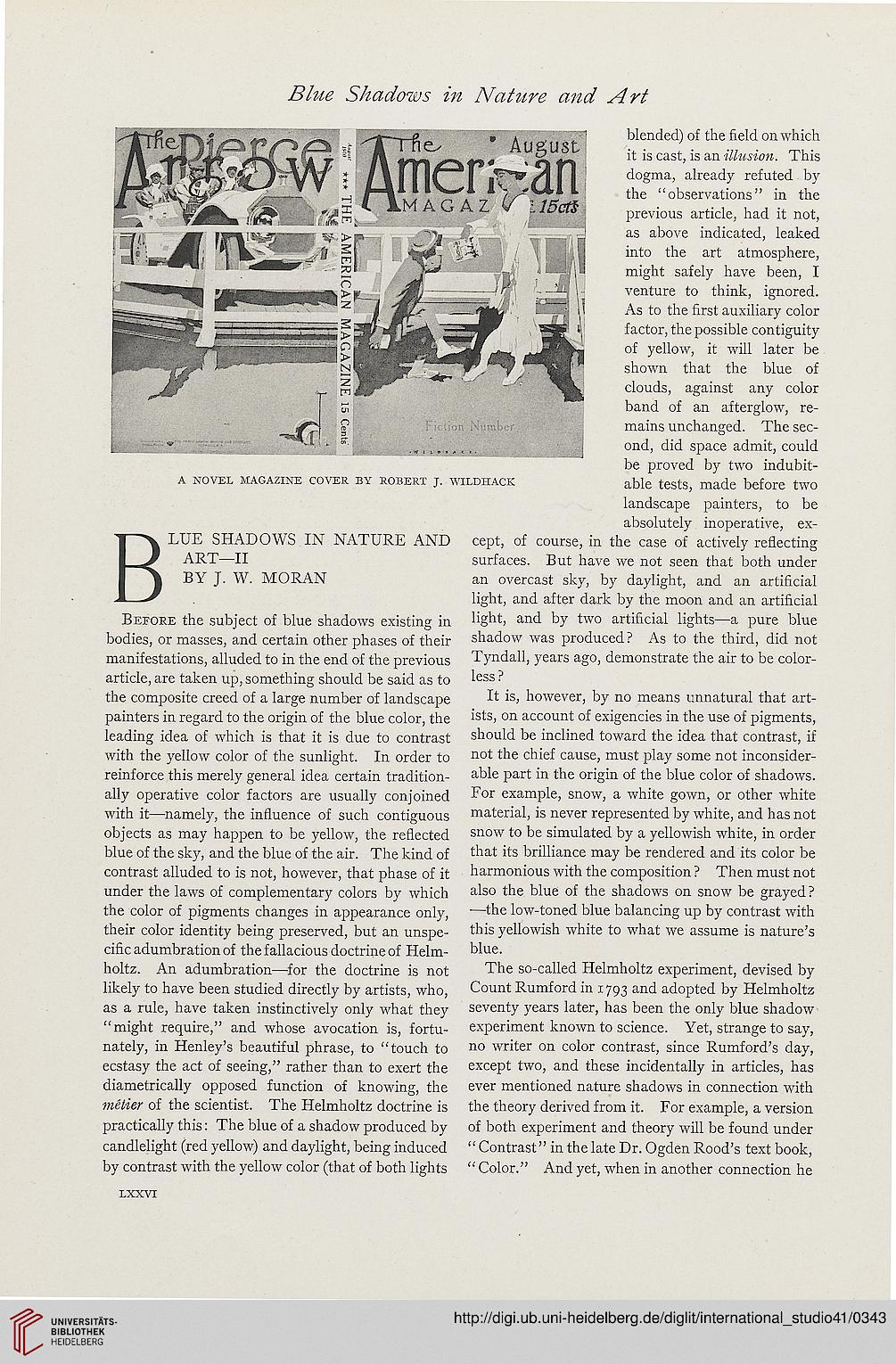 Information about OCR text
Blue Shadows in Nature and Art

I ri^^l I dogma, already refuted by

as above indicated, leaked
into the art atmosphere,
might safely have been, I
venture to think, ignored.
As to the first auxiliary color
factor, the possible contiguity
of yellow, it will later be
shown that the blue of
clouds, against any color
band of an afterglow, re-
mains unchanged. The sec-
ond, did space admit, could
be proved by two indubit-
a novel magazine cover by Robert j. wildhack able tests, made before two

BLUE SHADOWS IN NATURE AND cept, of course, in the case of actively reflecting
ART—II surfaces. But have we not seen that both under

BY J. W. MORAN an overcast sky, by daylight, and an artificial

light, and after dark by the moon and an artificial
Before the subject of blue shadows existing in light, and by two artificial lights—a pure blue
bodies, or masses, and certain other phases of their shadow was produced? As to the third, did not
manifestations, alluded to in the end of the previous Tyndall, years ago, demonstrate the air to be color-
article, are taken up, something should be said as to less '■

the composite creed of a large number of landscape lt is> however, by no means unnatural that art-
painters in regard to the origin of the blue color, the ists> on account of exigencies in the use of pigments,
leading idea of which is that it is due to contrast should be inclined toward the idea that contrast, if
with the yellow color of the sunlight. In order to n°t the chief cause, must play some not inconsider-
reinforce this merely general idea certain tradition- able part in the origin of the blue color of shadows,
ally operative color factors are usually conjoined For example, snow, a white gown, or other white
with it—namely, the influence of such contiguous material, is never represented by white, and has not
objects as may happen to be yellow, the reflected snow to be simulated by a yellowish white, in order
blue of the sky, and the blue of the air. The kind of that its brilliance may be rendered and its color be
contrast alluded to is not, however, that phase of it harmonious with the composition ? Then must not
under the laws of complementary colors by which also the blue of the shadows on snow be grayed?
the color of pigments changes in appearance only, —the low-toned blue balancing up by contrast with
their color identity being preserved, but an unspe- this yellowish white to what we assume is nature's
cine adumbration of the fallacious doctrine of Helm- blue.

holtz. An adumbration—for the doctrine is not The so-called Helmholtz experiment, devised by
likely to have been studied directly by artists, who, Count Rumford in 1793 and adopted by Helmholtz
as a rule, have taken instinctively only what they seventy years later, has been the only blue shadow
"might require," and whose avocation is, fortu- experiment known to science. Yet, strange to say,
nately, in Henley's beautiful phrase, to "touch to no writer on color contrast, since Rumford's day,
ecstasy the act of seeing," rather than to exert the except two, and these incidentally in articles, has
diametrically opposed function of knowing, the ever mentioned nature shadows in connection with
metier of the scientist. The Helmholtz doctrine is the theory derived from it. For example, a version
practically this: The blue of a shadow produced by of both experiment and theory will be found under
candlelight (red yellow) and daylight, being induced "Contrast" in the late Dr. Ogden Rood's text book,
by contrast with the yellow color (that of both lights " Color." And yet, when in another connection he