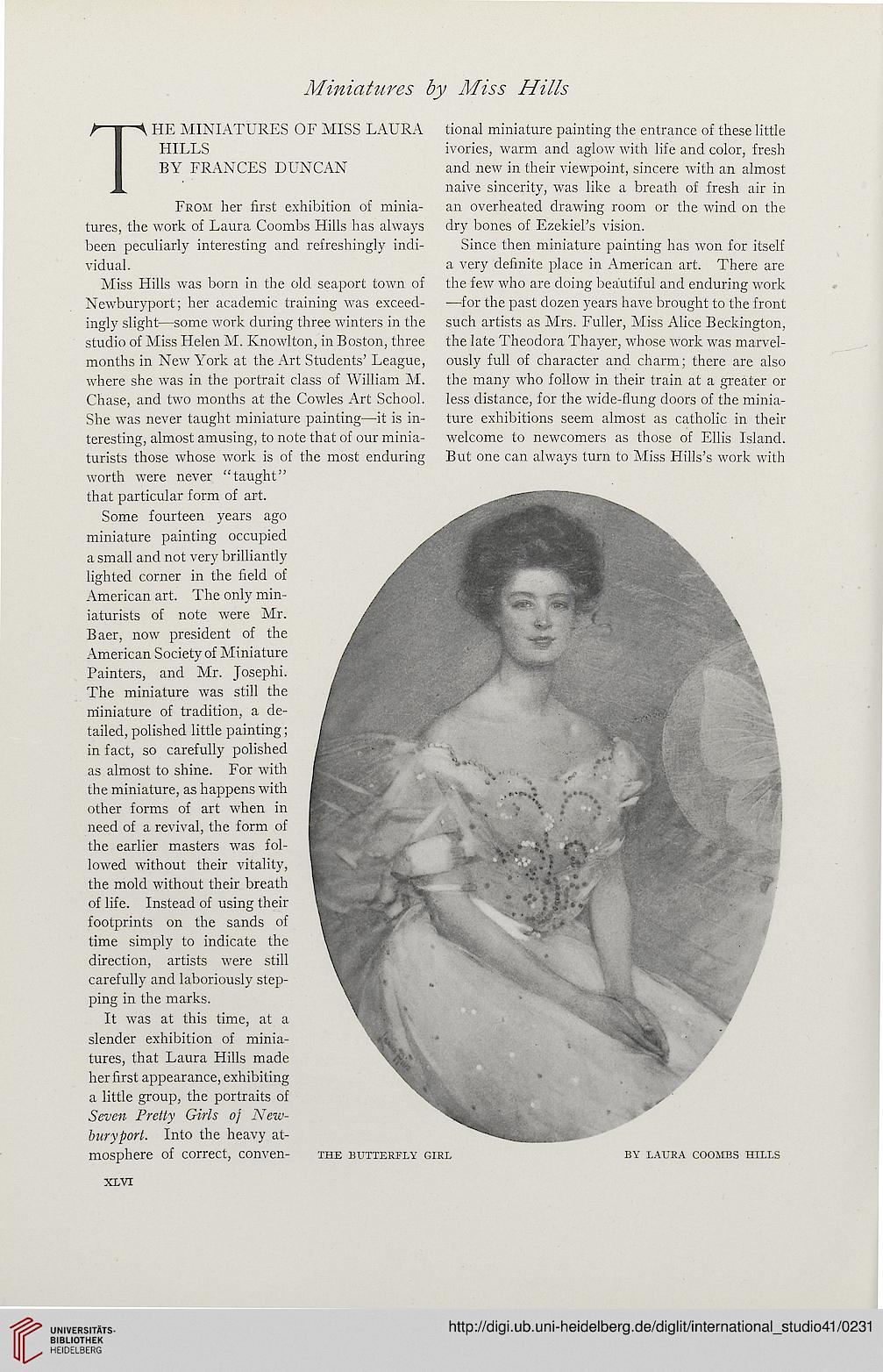 THE MINIATURES OF MISS LAURA tional miniature painting the entrance of these little
HILLS ivories, warm and aglow with life and color, fresh

BY FRANCES DUNCAN and new in their viewpoint, sincere with an almost

naive sincerity, was like a breath of fresh air in
From her first exhibition of minia- an overheated drawing room or the wind on the
tures, the work of Laura Coombs Hills has always dry bones of Ezekiel's vision,
been peculiarly interesting and refreshingly indi- Since then miniature painting has won for itself
vidual. a very definite place in American art. There are

Miss Hills was born in the old seaport town of the few who are doing beautiful and enduring work
Newburyport; her academic training was exceed- —for the past dozen years have brought to the front
ingly slight—some work during three winters in the such artists as Mrs. Fuller, Miss Alice Beckington,
studio of Miss Helen M. Knowlton, in Boston, three the late Theodora Thayer, whose work was marvel-
months in New York at the Art Students' League, ously full of character and charm; there are also
where she was in the portrait class of William M. the many who follow in their train at a greater or
Chase, and two months at the Cowles Art School, less distance, for the wide-flung doors of the minia-
She was never taught miniature painting—it is in- ture exhibitions seem almost as catholic in their
teresting, almost amusing, to note that of our minia- welcome to newcomers as those of Ellis Island,
turists those whose work is of the most enduring But one can always turn to Miss Hills's work with
worth were never "taught"
that particular form of art.

Some fourteen years ago
miniature painting occupied
a small and not very brilliantly
lighted corner in the field of
American art. The only min-
iaturists of note were Mr.
Baer, now president of the
American Society of Miniature
Painters, and Mr. Josephi.
The miniature was still the
miniature of tradition, a de-
tailed, polished little painting;
in fact, so carefully polished
as almost to shine. For with
the miniature, as happens with
other forms of art when in
need of a revival, the form of
the earlier masters was fol-
lowed without their vitality,
the mold without their breath
of life. Instead of using their
footprints on the sands of
time simply to indicate the
direction, artists were still
carefully and laboriously step-
ping in the marks.

It was at this time, at a
slender exhibition of minia-
tures, that Laura Hills made
her first appearance, exhibiting
a little group, the portraits of
Seven Pretty Girls oj New-
buryport. Into the heavy at-
mosphere of correct, conven- the butterfly girl by laura coombs hills