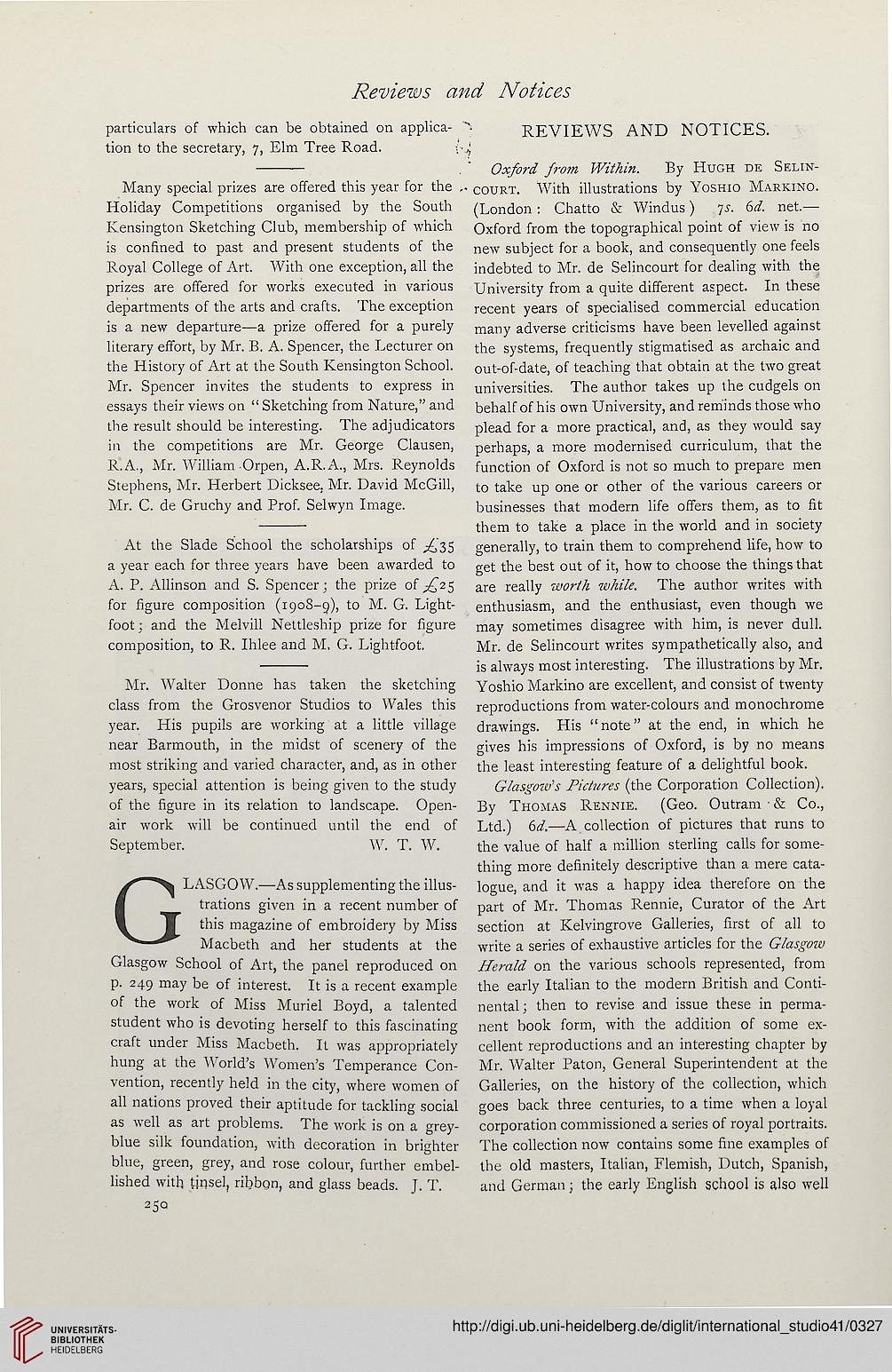 particulars of which can be obtained on applica-
tion to the secretary, 7, Elm Tree Road.

Many special prizes are offered this year for the ,
Holiday Competitions organised by the South
Kensington Sketching Club, membership of which
is confined to past and present students of the
Royal College of Art. With one exception, all the
prizes are offered for works executed in various
departments of the arts and crafts. The exception
is a new departure—a prize offered for a purely
literary effort, by Mr. B. A. Spencer, the Lecturer on
the History of Art at the South Kensington School.
Mr. Spencer invites the students to express in
essays their views on " Sketching from Nature," and
the result should be interesting. The adjudicators
in the competitions are Mr. George Clausen,
R.A., Mr. William Orpen, A.R.A., Mrs. Reynolds
Stephens, Mr. Herbert Dicksee, Mr. David McGill,
Mr. C. de Gruchy and Prof. Selwyn Image.

At the Slade School the scholarships of ,£35
a year each for three years have been awarded to
A. P. Allinson and S. Spencer; the prize of ^25
for figure composition (1908-9), to M. G. Light-
foot ; and the Melvill Nettleship prize for figure
composition, to R. Ihlee and M. G. Lightfoot.

Mr. Walter Donne has taken the sketching
class from the Grosvenor Studios to Wales this
year. His pupils are working at a little village
near Barmouth, in the midst of scenery of the
most striking and varied character, and, as in other
years, special attention is being given to the study
of the figure in its relation to landscape. Open-
air work will be continued until the end of
September. W. T. W.

GLASGOW.—As supplementing the illus-
trations given in a recent number of
this magazine of embroidery by Miss
Macbeth and her students at the
Glasgow School of Art, the panel reproduced on
p. 249 may be of interest. It is a recent example
of the work of Miss Muriel Boyd, a talented
student who is devoting herself to this fascinating
craft under Miss Macbeth. It was appropriately
hung at the World's Women's Temperance Con-
vention, recently held in the city, where women of
all nations proved their aptitude for tackling social
as well as art problems. The work is on a grey-
blue silk foundation, with decoration in brighter
blue, green, grey, and rose colour, further embel-
lished with tinsel, ribbon, and glass beads. J. T.
250.

Oxford from Within. By Hugh de Selin-
court. With illustrations by Yoshio Markino.
(London : Chatto & Windus) ts. 6d. net.—
Oxford from the topographical point of view is no
new subject for a book, and consequently one feels
indebted to Mr. de Selincourt for dealing with the
University from a quite different aspect. In these
recent years of specialised commercial education
many adverse criticisms have been levelled against
the systems, frequently stigmatised as archaic and
out-of-date, of teaching that obtain at the two great
universities. The author takes up the cudgels on
behalf of his own University, and reminds those who
plead for a more practical, and, as they would say
perhaps, a more modernised curriculum, that the
function of Oxford is not so much to prepare men
to take up one or other of the various careers or
businesses that modern life offers them, as to fit
them to take a place in the world and in society
generally, to train them to comprehend life, how to
get the best out of it, how to choose the things that
are really worth while. The author writes with
enthusiasm, and the enthusiast, even though we
may sometimes disagree with him, is never dull.
Mr. de Selincourt writes sympathetically also, and
is always most interesting. The illustrations by Mr.
Yoshio Markino are excellent, and consist of twenty
reproductions from water-colours and monochrome
drawings. His "note" at the end, in which he
gives his impressions of Oxford, is by no means
the least interesting feature of a delightful book.

Glasgow's Pictures (the Corporation Collection).
By Thomas Rennie. (Geo. Outram & Co.,
Ltd.) 6d.—A collection of pictures that runs to
the value of half a million sterling calls for some-
thing more definitely descriptive than a mere cata-
logue, and it was a happy idea therefore on the
part of Mr. Thomas Rennie, Curator of the Art
section at Kelvingrove Galleries, first of all to
write a series of exhaustive articles for the Glasgoiv
Herald on the various schools represented, from
the early Italian to the modern British and Conti-
nental ; then to revise and issue these in perma-
nent book form, with the addition of some ex-
cellent reproductions and an interesting chapter by
Mr. Walter Paton, General Superintendent at the
Galleries, on the history of the collection, which
goes back three centuries, to a time when a loyal
corporation commissioned a series of royal portraits.
The collection now contains some fine examples of
the old masters, Italian, Flemish, Dutch, Spanish,
and German; the early English school is also well