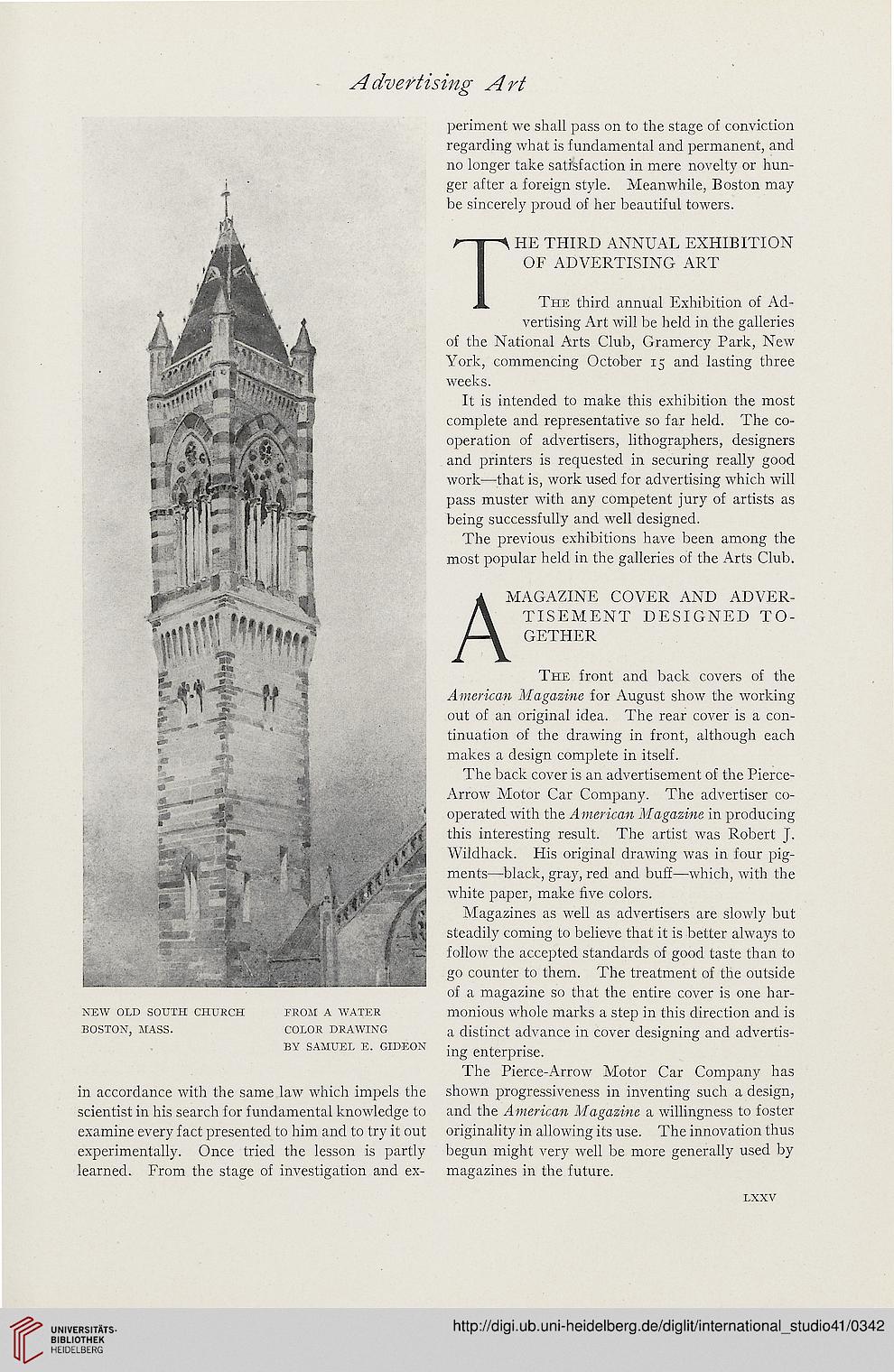 periment we shall pass on to the stage of conviction
regarding what is fundamental and permanent, and
no longer take satisfaction in mere novelty or hun-
ger after a foreign style. Meanwhile, Boston may
be sincerely proud of her beautiful towers.

The third annual Exhibition of Ad-
vertising Art will be held in the galleries
of the National Arts Club, Gramercy Park, New
York, commencing October 15 and lasting three
weeks.

It is intended to make this exhibition the most
complete and representative so far held. The co-
operation of advertisers, lithographers, designers
and printers is requested in securing really good
work—that is, work used for advertising which will
pass muster with any competent jury of artists as
being successfully and well designed.

The previous exhibitions have been among the
most popular held in the galleries of the Arts Club.

The front and back covers of the
American Magazine for August show the working
out of an original idea. The rear cover is a con-
tinuation of the drawing in front, although each
makes a design complete in itself.

The back cover is an advertisement of the Pierce-
■H Arrow Motor Car Company. The advertiser co-
operated with the American Magazine in producing
I this interesting result. The artist was Robert J.
Wildhack. His original drawing was in four pig-
merits—black, gray, red and buff—which, with the
white paper, make live colors.

Magazines as well as advertisers are slowly but
steadily coming to believe thai it is better always to
follow the accepted standards of good taste than to
go counter to them. The treatment of the outside
of a magazine so that the entire cover is one har-
new old south church from a water monious whole marks a step in this direction and is

The Pierce-Arrow Motor Car Company has
in accordance with the same law which impels the shown progressiveness in inventing such a design,
scientist in his search for fundamental knowledge to and the American Magazine a willingness to foster
examine every fact presented to him and to try it out originality in allowing its use. The innovation thus
experimentally. Once tried the lesson is partly begun might very well be more generally used by
learned. From the stage of investigation and ex- magazines in the future.