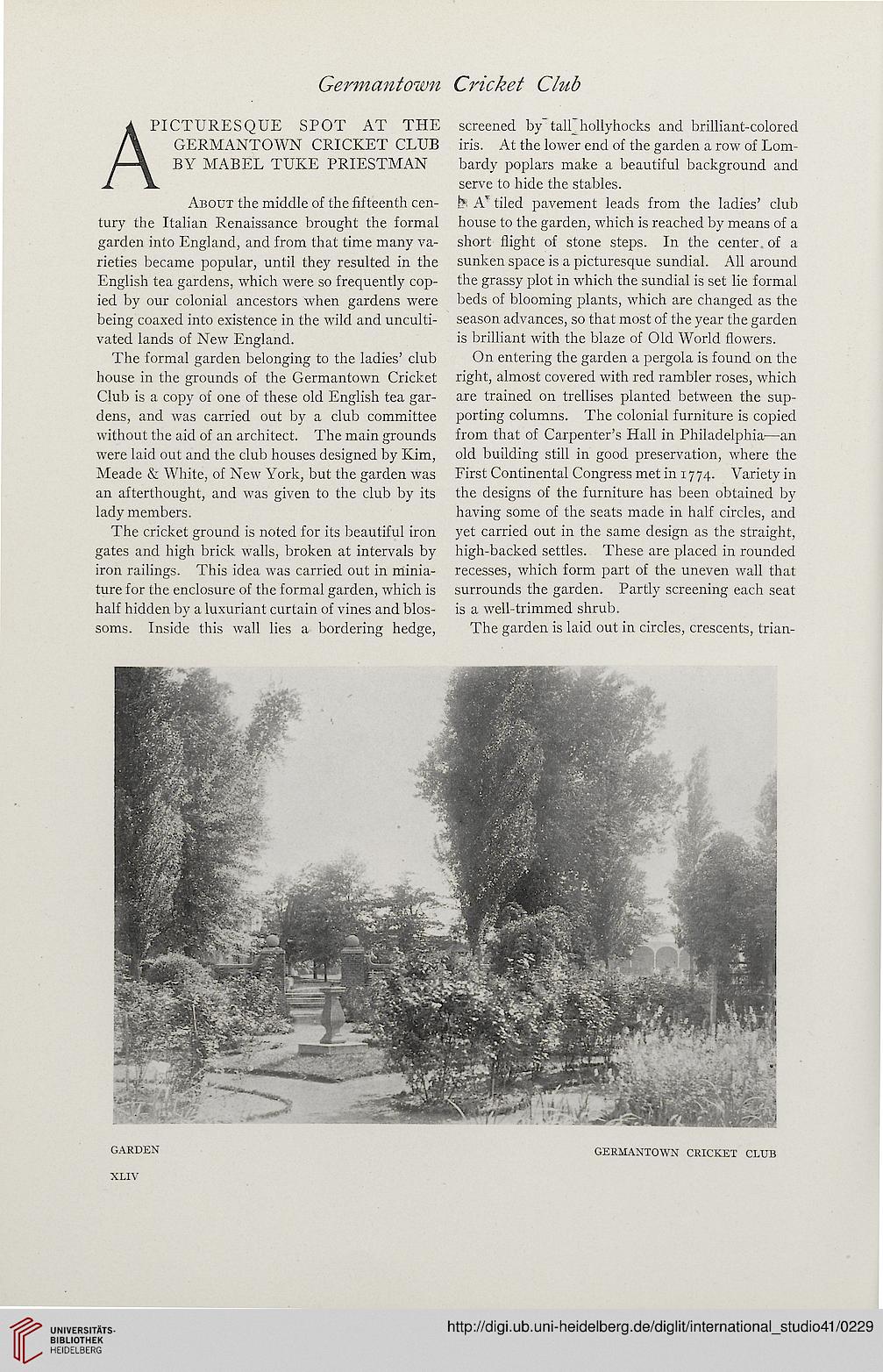 About the middle of the fifteenth cen-
tury the Italian Renaissance brought the formal
garden into England, and from that time many va-
rieties became popular, until they resulted in the
English tea gardens, which were so frequently cop-
ied by our colonial ancestors when gardens were
being coaxed into existence in the wild and unculti-
vated lands of New England.

The formal garden belonging to the ladies' club
house in the grounds of the Germantown Cricket
Club is a copy of one of these old English tea gar-
dens, and was carried out by a club committee
without the aid of an architect. The main grounds
were laid out and the club houses designed by Kim,
Meade & White, of New York, but the garden was
an afterthought, and was given to the club by its
lady members.

The cricket ground is noted for its beautiful iron
gates and high brick walls, broken at intervals by
iron railings. This idea was carried out in minia-
ture for the enclosure of the formal garden, which is
half hidden by a luxuriant curtain of vines and blos-
soms. Inside this wall lies a bordering hedge,

screened by tall_ hollyhocks and brilliant-colored
iris. At the lower end of the garden a row of Lom-
bardy poplars make a beautiful background and
serve to hide the stables.

b Av tiled pavement leads from the ladies' club
house to the garden, which is reached by means of a
short flight of stone steps. In the center, of a
sunken space is a picturesque sundial. All around
the grassy plot in which the sundial is set lie formal
beds of blooming plants, which are changed as the
season advances, so that most of the year the garden
is brilliant with the blaze of Old World flowers.

On entering the garden a pergola is found on the
right, almost covered with red rambler roses, which
are trained on trellises planted between the sup-
porting columns. The colonial furniture is copied
from that of Carpenter's Hall in Philadelphia—an
old building still in good preservation, where the
First Continental Congress met in 17 74. Variety in
the designs of the furniture has been obtained by
having some of the seats made in half circles, and
yet carried out in the same design as the straight,
high-backed settles. These are placed in rounded
recesses, which form part of the uneven wall that
surrounds the garden. Partly screening each seat
is a well-trimmed shrub.

The garden is laid out in circles, crescents, trian-