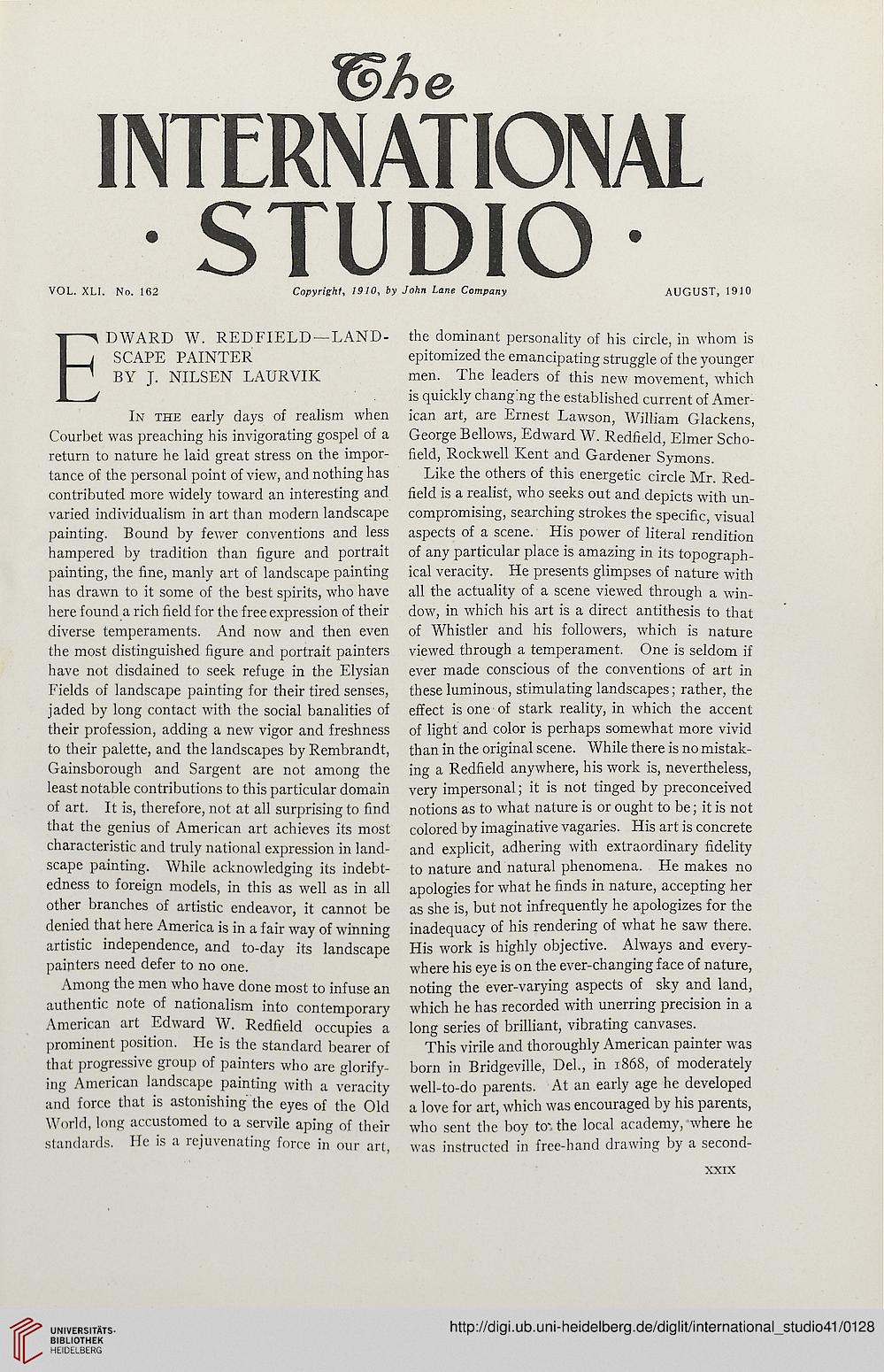 In the early days of realism when
Courbet was preaching his invigorating gospel of a
return to nature he laid great stress on the impor-
tance of the personal point of view, and nothing has
contributed more widely toward an interesting and
varied individualism in art than modern landscape
painting. Bound by fewer conventions and less
hampered by tradition than figure and portrait
painting, the fine, manly art of landscape painting
has drawn to it some of the best spirits, who have
here found a rich field for the free expression of their
diverse temperaments. And now and then even
the most distinguished figure and portrait painters
have not disdained to seek refuge in the Elysian
Fields of landscape painting for their tired senses,
jaded by long contact with the social banalities of
their profession, adding a new vigor and freshness
to their palette, and the landscapes by Rembrandt,
Gainsborough and Sargent are not among the
least notable contributions to this particular domain
of art. It is, therefore, not at all surprising to find
that the genius of American art achieves its most
characteristic and truly national expression in land-
scape painting. While acknowledging its indebt-
edness to foreign models, in this as well as in all
other branches of artistic endeavor, it cannot be
denied that here America is in a fair way of winning
artistic independence, and to-day its landscape
painters need defer to no one.

Among the men who have done most to infuse an
authentic note of nationalism into contemporary
American art Edward W. Redfield occupies a
prominent position. He is the standard bearer of
that progressive group of painters who are glorify-
ing American landscape painting with a veracity
and force that is astonishing the eyes of the Old
World, long accustomed to a servile aping of their
standards. He is a rejuvenating force in our art

the dominant personality of his circle, in whom is
epitomized the emancipating struggle of the younger
men. The leaders of this new movement, which
is quickly changing the established current of Amer-
ican art, are Ernest Lawson, William Glackens,
George Bellows, Edward W. Redfield, Elmer Scho-
field, Rockwell Kent and Gardener Symons.

Like the others of this energetic circle Mr. Red-
field is a realist, who seeks out and depicts with un-
compromising, searching strokes the specific, visual
aspects of a scene. His power of literal rendition
of any particular place is amazing in its topograph-
ical veracity. He presents glimpses of nature with
all the actuality of a scene viewed through a win-
dow, in which his art is a direct antithesis to that
of Whistler and his followers, which is nature
viewed through a temperament. One is seldom if
ever made conscious of the conventions of art in
these luminous, stimulating landscapes; rather, the
effect is one of stark reality, in which the accent
of light and color is perhaps somewhat more vivid
than in the original scene. While there is no mistak-
ing a Redfield anywhere, his work is, nevertheless,
very impersonal; it is not tinged by preconceived
notions as to what nature is or ought to be; it is not
colored by imaginative vagaries. His art is concrete
and explicit, adhering with extraordinary fidelity
to nature and natural phenomena. He makes no
apologies for what he finds in nature, accepting her
as she is, but not infrequently he apologizes for the
inadequacy of his rendering of what he saw there.
His work is highly objective. Always and every-
where his eye is on the ever-changing face of nature,
noting the ever-varying aspects of sky and land,
which he has recorded with unerring precision in a
long series of brilliant, vibrating canvases.

This virile and thoroughly American painter was
born in Bridgeville, Del., in 1868, of moderately
well-to-do parents. At an early age he developed
a love for art, which was encouraged by his parents,
who sent the boy to', the local academy, where he
was instructed in free-hand drawing by a second-