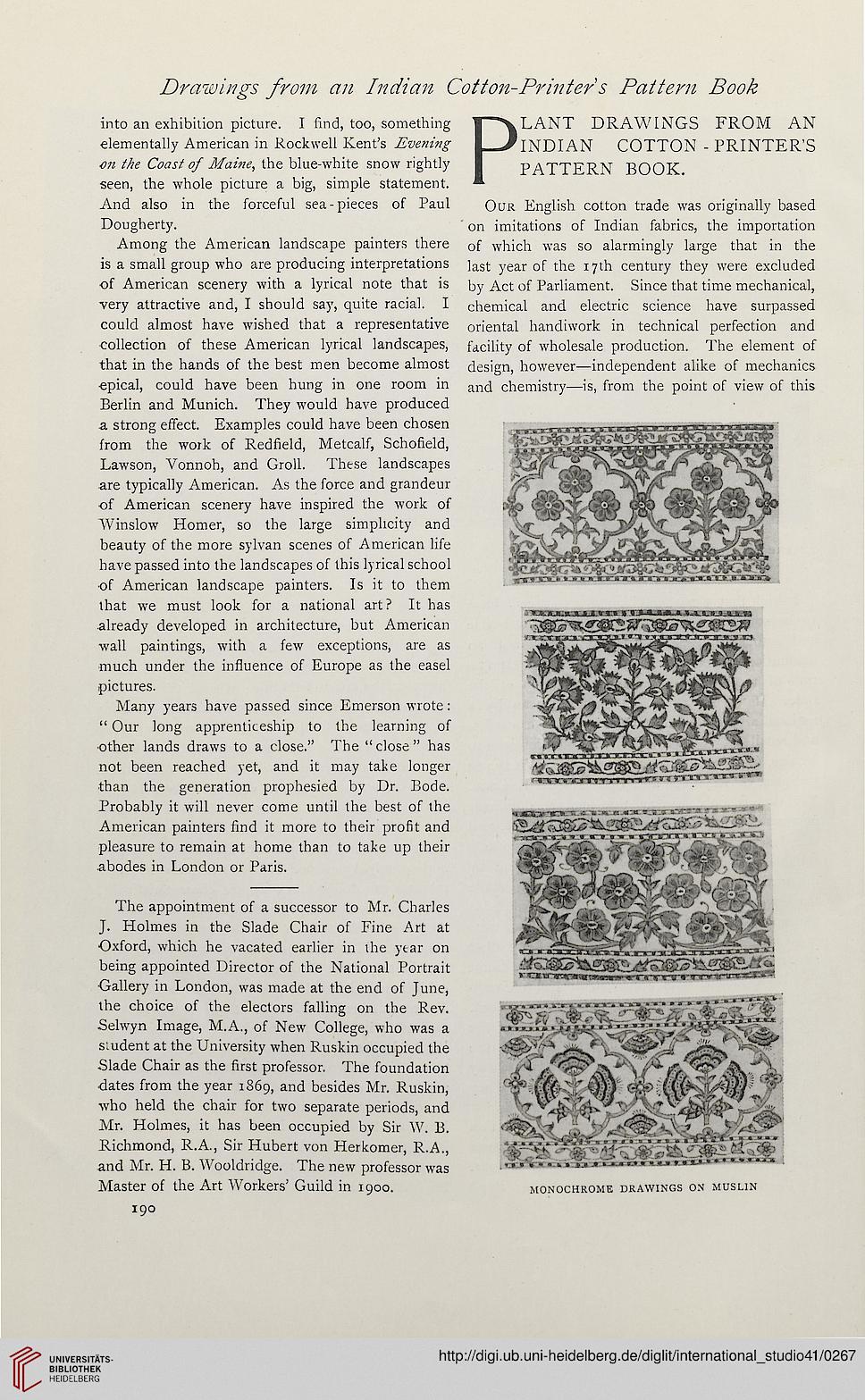 into an exhibition picture. I find, too, something
elementally American in Rockwell Kent's Evening
on the Coast of Maine, the blue-white snow rightly
seen, the whole picture a big, simple statement.
And also in the forceful sea-pieces of Paul
Dougherty.

Among the American landscape painters there
is a small group who are producing interpretations
of American scenery with a lyrical note that is
very attractive and, I should say, quite racial. I
could almost have wished that a representative
collection of these American lyrical landscapes,
that in the hands of the best men become almost
epical, could have been hung in one room in
Berlin and Munich. They would have produced
a strong effect. Examples could have been chosen
from the work of Redfield, Metcalf, Schofield,
Lawson, Vonnoh, and Groll. These landscapes
are typically American. As the force and grandeur
of American scenery have inspired the work of
Winslow Homer, so the large simplicity and
beauty of the more sylvan scenes of American life
have passed into the landscapes of this lyrical school
of American landscape painters. Is it to them
that we must look for a national art? It has
already developed in architecture, but American
wall paintings, with a few exceptions, are as
much under the influence of Europe as the easel
pictures.

Many years have passed since Emerson wrote:
" Our long apprenticeship to the learning of
other lands draws to a close." The " close " has
not been reached yet, and it may take longer
than the generation prophesied by Dr. Bode.
Probably it will never come until the best of the
American painters find it more to their profit and
pleasure to remain at home than to take up their
abodes in London or Paris.

The appointment of a successor to Mr. Charles
J. Holmes in the Slade Chair of Fine Art at
Oxford, which he vacated earlier in the year on
being appointed Director of the National Portrait
Gallery in London, was made at the end of June,
the choice of the electors falling on the Rev.
Selwyn Image, M.A., of New College, who was a
s.udent at the University when Ruskin occupied the
Slade Chair as the first professor. The foundation
dates from the year 1869, and besides Mr. Ruskin,
who held the chair for two separate periods, and
Mr. Holmes, it has been occupied by Sir W. B.
Richmond, R.A., Sir Hubert von Herkomer, R.A.,
and Mr. H. B. Wooldridge. The new professor was
Master of the Art Workers' Guild in 1900.
190