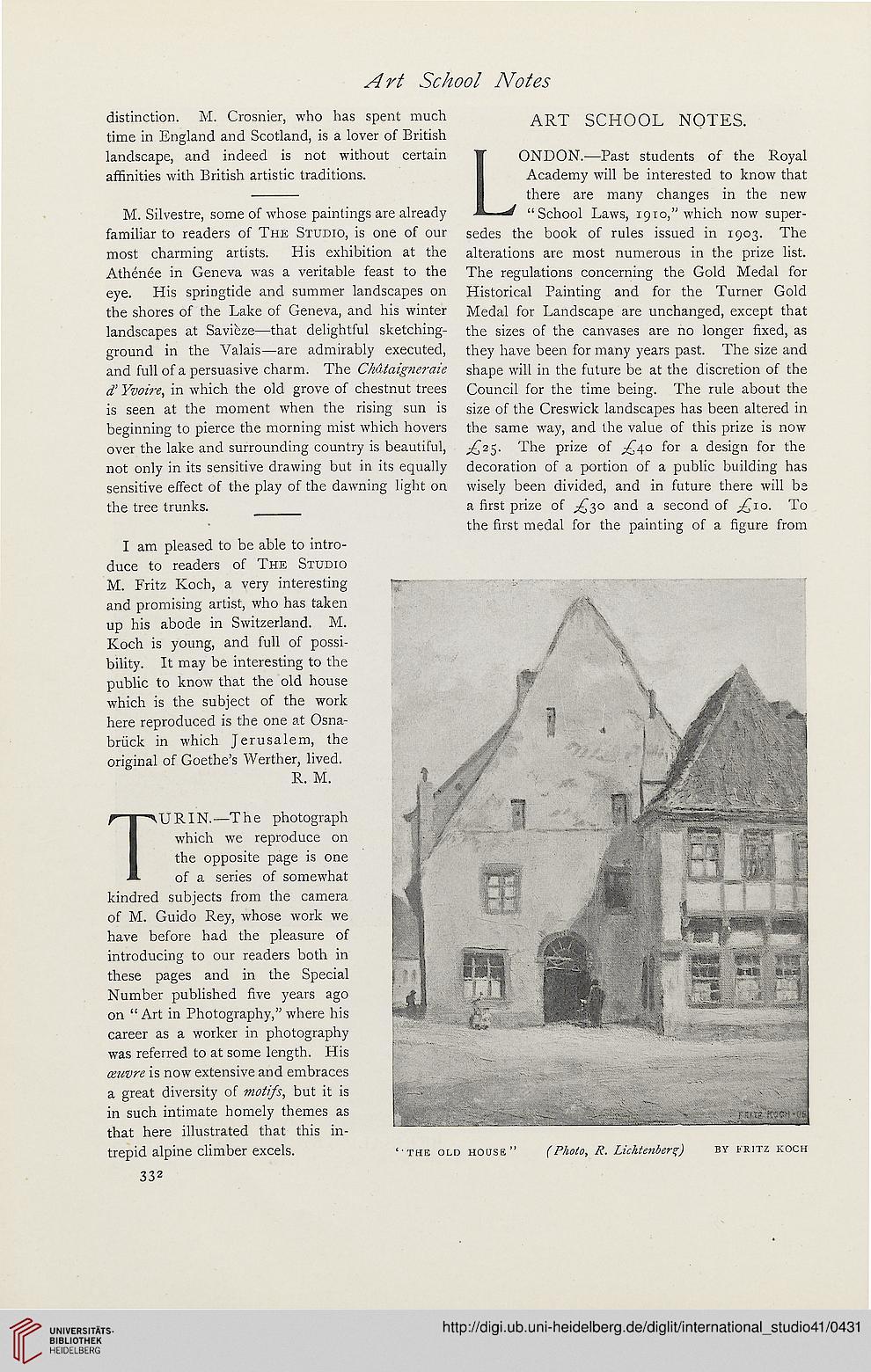 distinction. M. Crosnier, who has spent much ART SCHOOL NOTES

time in England and Scotland, is a lover of British

landscape, and indeed is not without certain "T ONDON.—Past students of the Royal
affinities with British artistic traditions. Academy will be interested to know that

- there are many changes in the new

M. Silvestre, some of whose paintings are already -1—^ "School Laws, 1910," which now super-
familiar to readers of The Studio, is one of our sedes the book of rules issued in 1903. The
most charming artists. His exhibition at the alterations are most numerous in the prize list.
Athenee in Geneva was a veritable feast to the The regulations concerning the Gold Medal for
eye. His springtide and summer landscapes on Historical Painting and for the Turner Gold
the shores of the Lake of Geneva, and his winter Medal for Landscape are unchanged, except that
landscapes at Savieze—that delightful sketching- the sizes of the canvases are no longer fixed, as
ground in the Valais—are admirably executed, they have been for many years past. The size and
and full of a persuasive charm. The Chataigneraie shape will in the future be at the discretion of the
d' Yvoire, in which the old grove of chestnut trees Council for the time being. The rule about the
is seen at the moment when the rising sun is size of the Creswick landscapes has been altered in
beginning to pierce the morning mist which hovers the same way, and the value of this prize is now
over the lake and surrounding country is beautiful, ,£25. The prize of £40 for a design for the
not only in its sensitive drawing but in its equally decoration of a portion of a public building has
sensitive effect of the play of the dawning light on wisely been divided, and in future there will be

the first medal for the painting of a figure from

I am pleased to be able to intro-
duce to readers of The Studio
M. Fritz Koch, a very interesting
and promising artist, who has taken
up his abode in Switzerland. M.
Koch is young, and full of possi-
bility. It may be interesting to the
public to know that the old house
which is the subject of the work
here reproduced is the one at Osna-
briick in which Jerusalem, the
original of Goethe's VVerther, lived.

"MJRIN.—The photograph
which we reproduce on
the opposite page is one
of a series of somewhat
kindred subjects from the camera
of M. Guido Rey, whose work we
have before had the pleasure of
introducing to our readers both in
these pages and in the Special
Number published five years ago
on " Art in Photography," where his
career as a worker in photography
was referred to at some length. His
ceuvre is now extensive and embraces
a great diversity of motifs, but it is
in such intimate homely themes as
that here illustrated that this in-
trepid alpine climber excels. ' the old house" (Photo, R. Lichtenbers;) by fritz koch