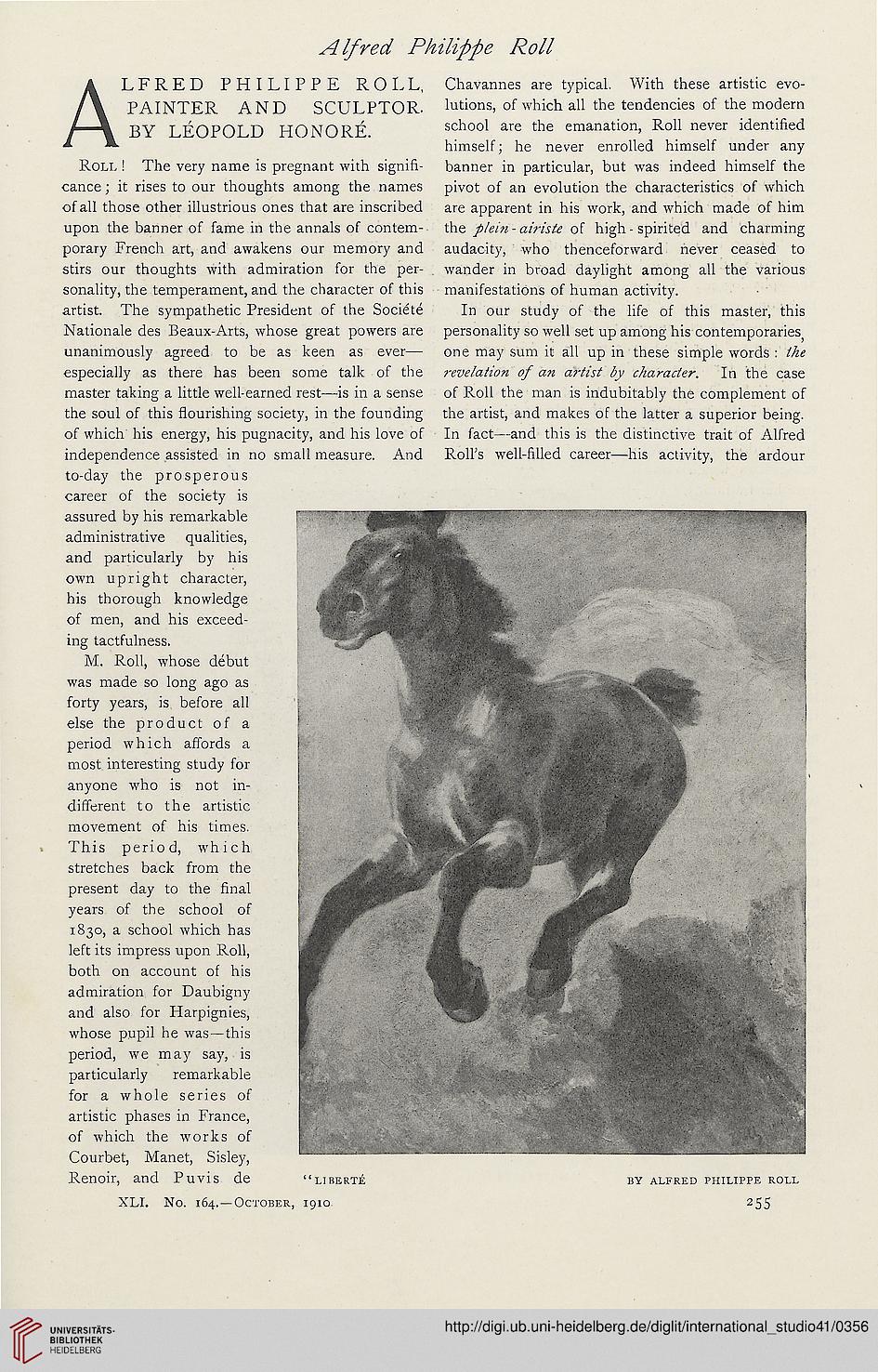 ALFRED PHILIPPE ROLL, Chavannes are typical. With these artistic evo-
PAINTER AND SCULPTOR, lutions, of which all the tendencies of the modern
jgy LEOPOLD HO NO RE school are the emanation, Roll never identified

himself; he never enrolled himself under any
Roll ! The very name is pregnant with signifi- banner in particular, but was indeed himself the
cance; it rises to our thoughts among the names pivot of an evolution the characteristics of which
of all those other illustrious ones that are inscribed are apparent in his work, and which made of him
upon the banner of fame in the annals of contem- the plein - airiste of high - spirited and charming
porary French art, and awakens our memory and audacity, who thenceforward never ceased to
stirs our thoughts with admiration for the per- ; wander in broad daylight among all the various
sonality, the temperament, and the character of this manifestations of human activity,
artist. The sympathetic President of the Societe In our study of the life of this master, this
Nationale des Beaux-Arts, whose great powers are personality so well set up among his contemporaries
unanimously agreed to be as keen as ever— one may sum it all up in these simple words : the
especially as there has been some talk of the revelation of an artist by character. In the case
master taking a little well-earned rest—is in a sense of Roll the man is indubitably the complement of
the soul of this flourishing society, in the founding the artist, and makes of the latter a superior being,
of which his energy, his pugnacity, and his love of In fact—and this is the distinctive trait of Alfred
independence assisted in no small measure. And Roll's well-filled career—his activity, the ardour
to-day the prosperous
career of the society is
assured by his remarkable
administrative qualities,
and particularly by his
own upright character,
his thorough knowledge
of men, and his exceed-
ing tactfulness.

M. Roll, whose debut
was made so long ago as
forty years, is before all
else the product of a
period which affords a
most interesting study for
anyone who is not in-
different to the artistic
movement of his times.
This period, which
stretches back from the
present day to the final
years of the school of
1830, a school which has
left its impress upon Roll,
both on account of his
admiration for Daubigny
and also for Harpignies,
whose pupil he was—this
period, we may say, is
particularly remarkable
for a whole series of
artistic phases in France,
of which the works of
Courbet, Manet, Sisley,