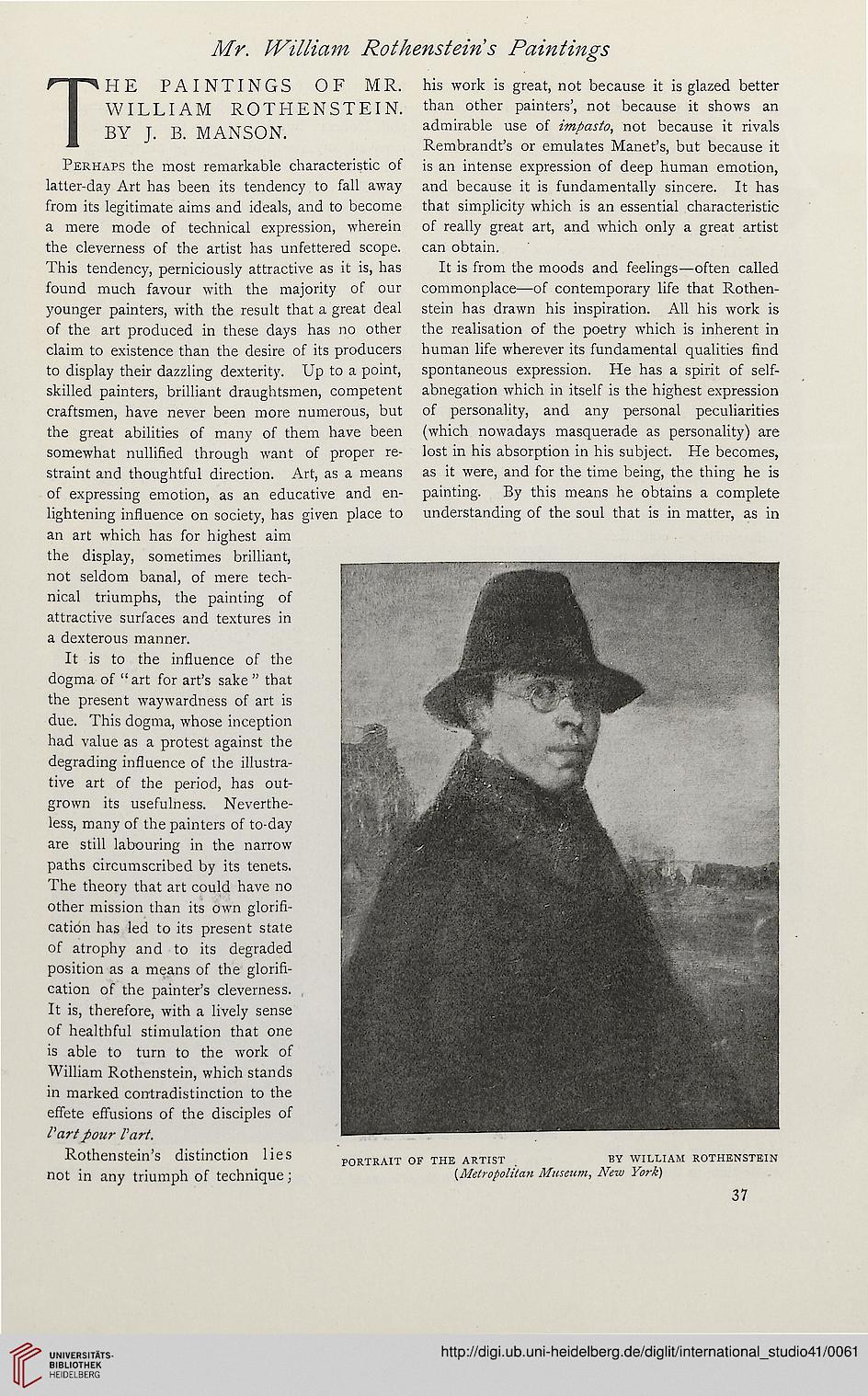 Rembrandt's or emulates Manet's, but because it
Perhaps the most remarkable characteristic ot is an intense expression of deep human emotion,
latter-day Art has been its tendency to fall away and because it is fundamentally sincere. It has
from its legitimate aims and ideals, and to become that simplicity which is an essential characteristic
a mere mode of technical expression, wherein of really great art, and which only a great artist
the cleverness of the artist has unfettered scope, can obtain.

This tendency, perniciously attractive as it is, has It is from the moods and feelings—often called
found much favour with the majority of our commonplace—of contemporary life that Rothen-
younger painters, with the result that a great deal stein has drawn his inspiration. All his work is
of the art produced in these days has no other the realisation of the poetry which is inherent in
claim to existence than the desire of its producers human life wherever its fundamental qualities find
to display their dazzling dexterity. Up to a point, spontaneous expression. He has a spirit of self-
skilled painters, brilliant draughtsmen, competent abnegation which in itself is the highest expression
craftsmen, have never been more numerous, but of personality, and any personal peculiarities
the great abilities of many of them have been (which nowadays masquerade as personality) are
somewhat nullified through want of proper re- lost in his absorption in his subject. He becomes,
straint and thoughtful direction. Art, as a means as it were, and for the time being, the thing he is
of expressing emotion, as an educative and en- painting. By this means he obtains a complete
lightening influence on society, has given place to understanding of the soul that is in matter, as in
an art which has for highest aim
the display, sometimes brilliant,
not seldom banal, of mere tech-
nical triumphs, the painting of
attractive surfaces and textures in
a dexterous manner.

It is to the influence of the
dogma of " art for art's sake " that
the present waywardness of art is
due. This dogma, whose inception
had value as a protest against the
degrading influence of the illustra-
tive art of the period, has out-
grown its usefulness. Neverthe-
less, many of the painters of to-day
are still labouring in the narrow
paths circumscribed by its tenets.
The theory that art could have no
other mission than its own glorifi-
cation has led to its present state
of atrophy and to its degraded
position as a means of the glorifi-
cation of the painter's cleverness.
It is, therefore, with a lively sense
of healthful stimulation that one
is able to turn to the work of
William Rothenstein, which stands
in marked contradistinction to the
effete effusions of the disciples of
I'art pour Fart.

Rothenstein's distinction lies portrait of the artist by william rothenstein

not in any triumph of technique; {Metropolitan Museum, New York)