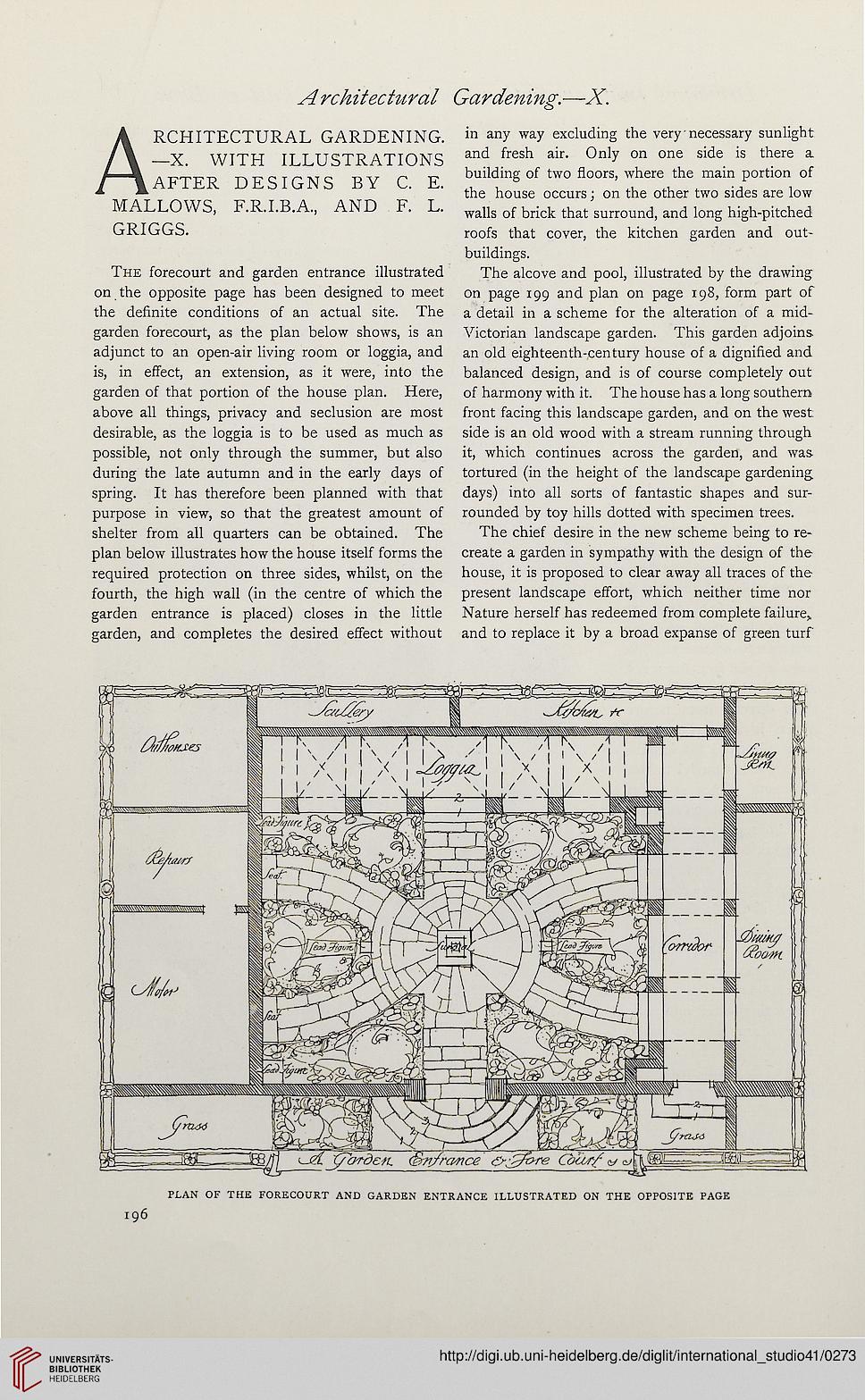 ARCHITECTURAL GARDENING. in anY waY excluding the very necessary sunlight
_2£ WITH ILLUSTRATIONS an<^ ^resn a'r- Only on one side is there a
AFTER DESIGNS BY C. E. bmlding of two floors, where the mam portion of
the house occurs; on the other two sides are low
MALLOWS, F.R.I.B.A., AND F. L. wans 0f brick that surround, and long high-pitched
GRIGGS. roofs that cover, the kitchen garden and out-
buildings.

The forecourt and garden entrance illustrated The alcove and pool, illustrated by the drawing
on the opposite page has been designed to meet on page 199 and plan on page 198, form part of
the definite conditions of an actual site. The a detail in a scheme for the alteration of a mid-
garden forecourt, as the plan below shows, is an Victorian landscape garden. This garden adjoins
adjunct to an open-air living room or loggia, and an old eighteenth-century house of a dignified and
is, in effect, an extension, as it were, into the balanced design, and is of course completely out
garden of that portion of the house plan. Here, of harmony with it. The house has a long southern
above all things, privacy and seclusion are most front facing this landscape garden, and on the west
desirable, as the loggia is to be used as much as side is an old wood with a stream running through
possible, not only through the summer, but also it, which continues across the garden, and was
during the late autumn and in the early days of tortured (in the height of the landscape gardening
spring. It has therefore been planned with that days) into all sorts of fantastic shapes and sur-
purpose in view, so that the greatest amount of rounded by toy hills dotted with specimen trees,
shelter from all quarters can be obtained. The The chief desire in the new scheme being to re-
plan below illustrates how the house itself forms the create a garden in sympathy with the design of the
required protection on three sides, whilst, on the house, it is proposed to clear away all traces of the
fourth, the high wall (in the centre of which the present landscape effort, which neither time nor
garden entrance is placed) closes in the little Nature herself has redeemed from complete failure*
garden, and completes the desired effect without and to replace it by a broad expanse of green turf