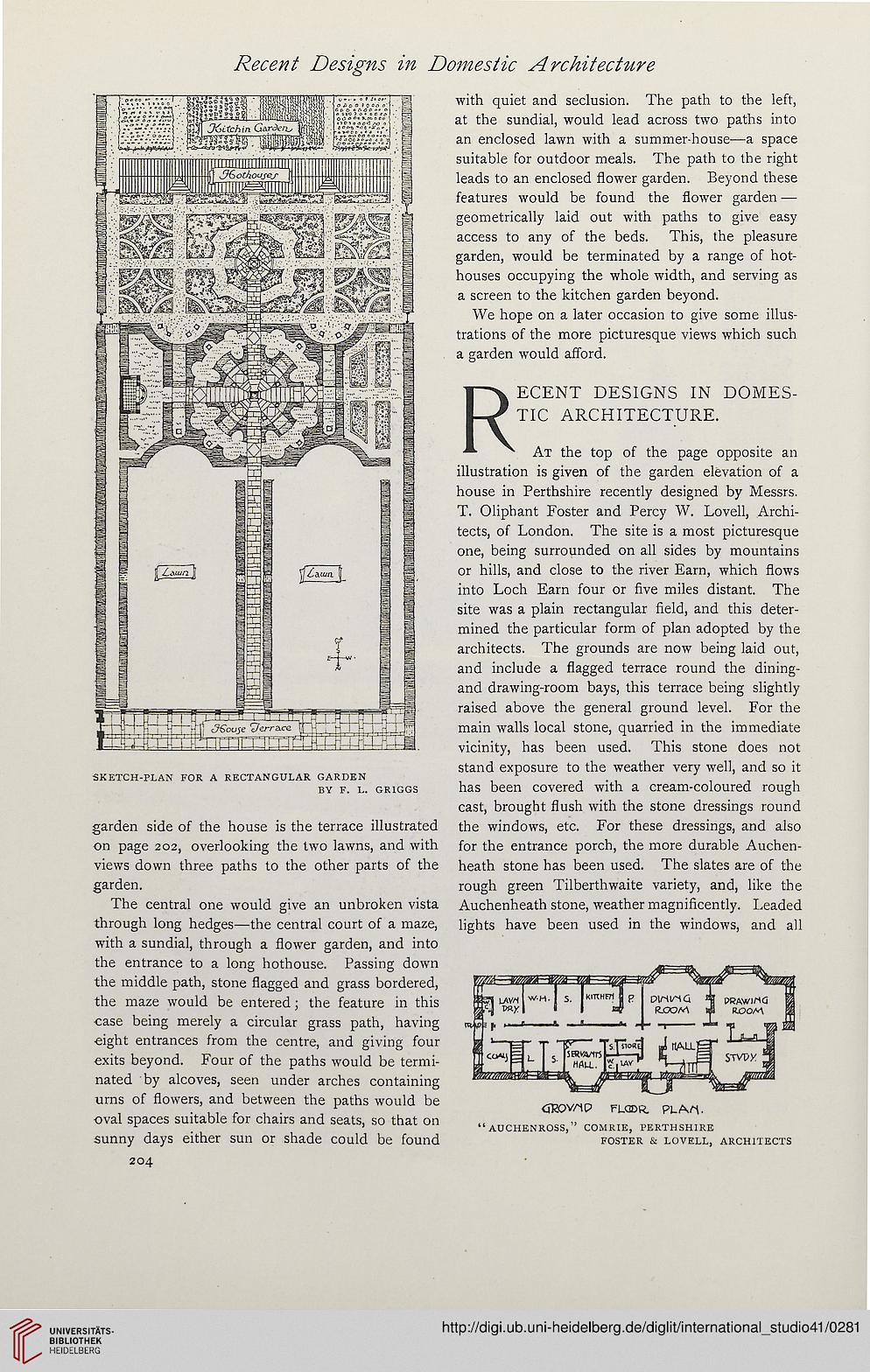 SKETCH-PLAN FOR A RECTANGULAR GARDEN

garden side of the house is the terrace illustrated
on page 202, overlooking the two lawns, and with
views down three paths to the other parts of the
garden.

The central one would give an unbroken vista
through long hedges—the central court of a maze,
with a sundial, through a flower garden, and into
the entrance to a long hothouse. Passing down
the middle path, stone flagged and grass bordered,
the maze would be entered; the feature in this
case being merely a circular grass path, having
eight entrances from the centre, and giving four
exits beyond. Four of the paths would be termi-
nated by alcoves, seen under arches containing
urns of flowers, and between the paths would be
oval spaces suitable for chairs and seats, so that on
sunny days either sun or shade could be found
204

with quiet and seclusion. The path to the left,
at the sundial, would lead across two paths into
an enclosed lawn with a summer-house—a space
suitable for outdoor meals. The path to the right
leads to an enclosed flower garden. Beyond these
features would be found the flower garden —
geometrically laid out with paths to give easy
access to any of the beds. This, the pleasure
garden, would be terminated by a range of hot-
houses occupying the whole width, and serving as
a screen to the kitchen garden beyond.

We hope on a later occasion to give some illus-
trations of the more picturesque views which such
a garden would afford.

RECENT DESIGNS IN DOMES-
TIC ARCHITECTURE.
At the top of the page opposite an
illustration is given of the garden elevation of a
house in Perthshire recently designed by Messrs.
T. Oliphant Foster and Percy W. Lovell, Archi-
tects, of London. The site is a most picturesque
one, being surrounded on all sides by mountains
or hills, and close to the river Earn, which flows
into Loch Earn four or five miles distant. The
site was a plain rectangular field, and this deter-
mined the particular form of plan adopted by the
architects. The grounds are now being laid out,
and include a flagged terrace round the dining-
and drawing-room bays, this terrace being slightly
raised above the general ground level. For the
main walls local stone, quarried in the immediate
vicinity, has been used. This stone does not
stand exposure to the weather very well, and so it
has been covered with a cream-coloured rough
cast, brought flush with the stone dressings round
the windows, etc. For these dressings, and also
for the entrance porch, the more durable Auchen-
heath stone has been used. The slates are of the
rough green Tilberthwaite variety, and, like the
Auchenheath stone, weather magnificently. Leaded
lights have been used in the windows, and all