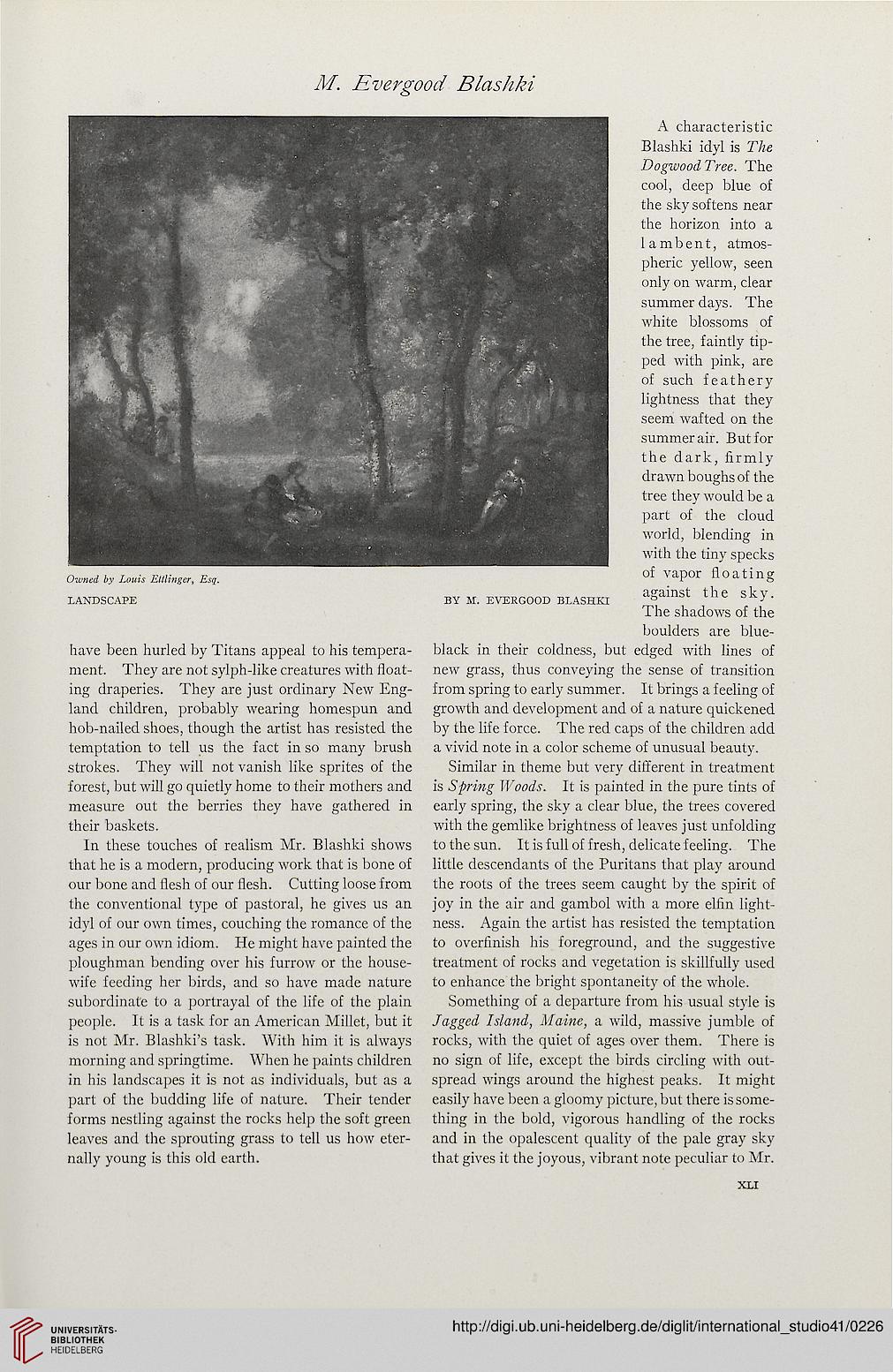 A characteristic
Blashki idyl is The
Dogwood Tree. The
cool, deep blue of
the sky softens near
the horizon into a
lambent, atmos-
pheric yellow, seen
only on warm, clear
summer days. The
white blossoms of
the tree, faintly tip-
ped with pink, are
of such feathery
lightness that they
seem wafted on the
summer air. But for
the dark, firmly
drawn boughs of the
tree they would be a
part of the cloud
world, blending in
with the tiny specks
of vapor floating
against the sky.
The shadows of the
boulders are blue-
have been hurled by Titans appeal to his tempera- black in their coldness, but edged with lines of
ment. They are not sylph-like creatures with float- new grass, thus conveying the sense of transition
ing draperies. They are just ordinary New Eng- from spring to early summer. It brings a feeling of
land children, probably wearing homespun and growth and development and of a nature quickened
hob-nailed shoes, though the artist has resisted the by the life force. The red caps of the children add
temptation to tell us the fact in so many brush a vivid note in a color scheme of unusual beauty,
strokes. They will not vanish like sprites of the Similar in theme but very different in treatment
forest, but will go quietly home to their mothers and is Spring Woods. It is painted in the pure tints of
measure out the berries they have gathered in early spring, the sky a clear blue, the trees covered
their baskets. with the gemlike brightness of leaves just unfolding

In these touches of realism Mr. Blashki shows to the sun. It is full of fresh, delicate feeling. The
that he is a modern, producing work that is bone of little descendants of the Puritans that play around
our bone and flesh of our flesh. Cutting loose from the roots of the trees seem caught by the spirit of
the conventional type of pastoral, he gives us an joy in the air and gambol with a more elfin light-
idyl of our own times, couching the romance of the ness. Again the artist has resisted the temptation
ages in our own idiom. He might have painted the to overfinish his foreground, and the suggestive
ploughman bending over his furrow or the house- treatment of rocks and vegetation is skillfully used
wife feeding her birds, and so have made nature to enhance the bright spontaneity of the whole,
subordinate to a portrayal of the life of the plain Something of a departure from his usual style is
people. It is a task for an American Millet, but it Jagged Island, Maine, a wild, massive jumble of
is not Mr. Blashki's task. With him it is always rocks, with the quiet of ages over them. There is
morning and springtime. When he paints children no sign of life, except the birds circling with out-
in his landscapes it is not as individuals, but as a spread wings around the highest peaks. It might
part of the budding life of nature. Their tender easily have been a gloomy picture, but there is some-
forms nestling against the rocks help the soft green thing in the bold, vigorous handling of the rocks
leaves and the sprouting grass to tell us how eter- and in the opalescent quality of the pale gray sky
nally young is this old earth. that gives it the joyous, vibrant note peculiar to Mr.