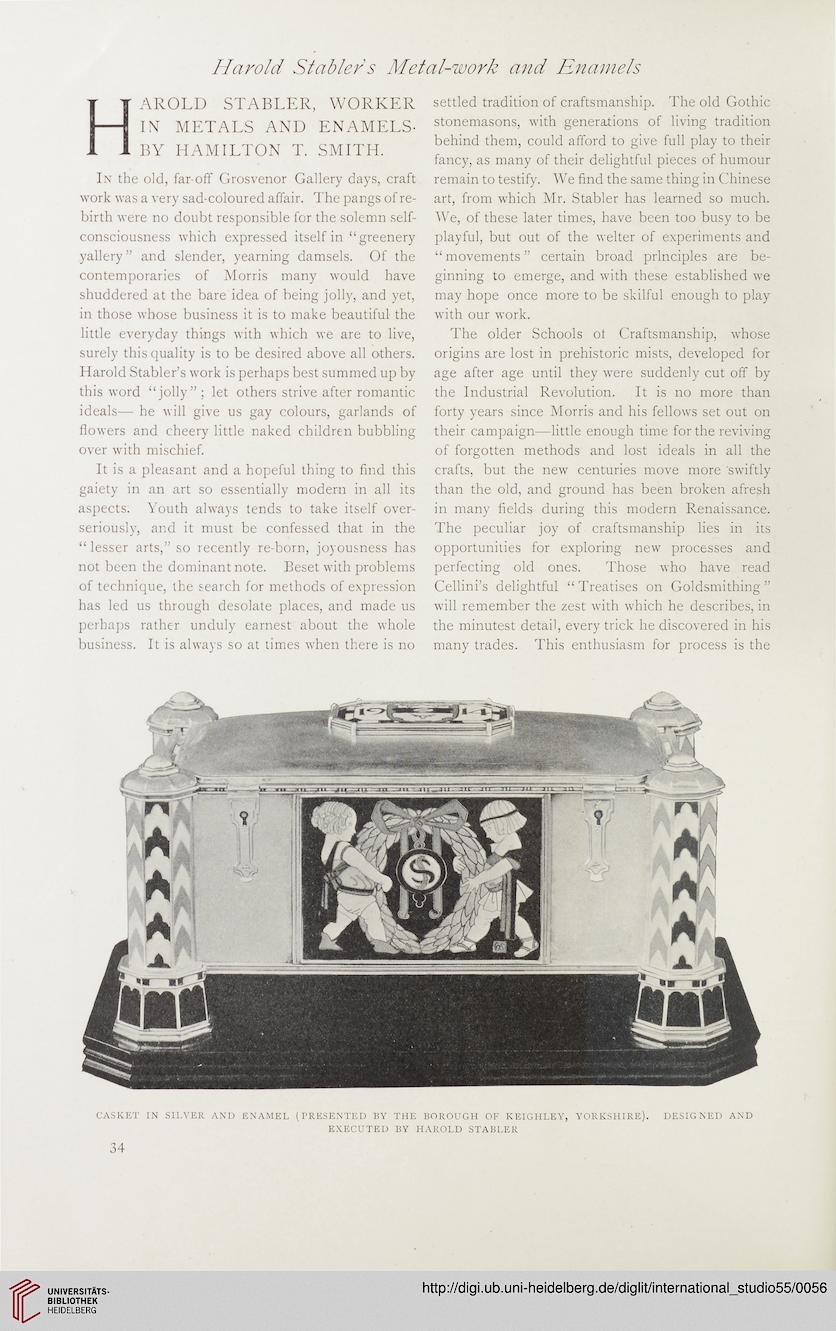 Harold stabler, worker
IN METALS AND ENAMELS-
BY HAMILTON T. SMITH.
In the old, far-off Grosvenor Gallery days, craft
work was a very sad-coloured affair. The pangs of re-
birth were no doubt responsible for the solemn self-
consciousness which expressed itself in “greenery
yallery” and slender, yearning damsels. Of the
contemporaries of Morris many would have
shuddered at the bare idea of being jolly, and yet,
in those whose business it is to make beautiful the
little everyday things with which we are to live,
surely this quality is to be desired above all others.
Harold Stabler’s work is perhaps best summed up by
this word “jolly”; let others strive after romantic
ideals— he will give us gay colours, garlands of
flowers and cheery little naked children bubbling
over with mischief.
It is a pleasant and a hopeful thing to find this
gaiety in an art so essentially modern in all its
aspects. Youth always tends to take itself over-
seriously, and it must be confessed that in the
“ lesser arts,” so recently re-born, joyousness has
not been the dominant note. Beset with problems
of technique, the search for methods of expression
has led us through desolate places, and made us
perhaps rather unduly earnest about the whole
business. It is always so at times when there is no

settled tradition of craftsmanship. The old Gothic
stonemasons, with generations of living tradition
behind them, could afford to give full play to their
fancy, as many of their delightful pieces of humour
remain to testify. We find the same thing in Chinese
art, from which Mr. Stabler has learned so much.
We, of these later times, have been too busy to be
playful, but out of the welter of experiments and
“ movements ” certain broad principles are be-
ginning to emerge, and with these established we
may hope once more to be skilful enough to play
with our work.
The older Schools of Craftsmanship, whose
origins are lost in prehistoric mists, developed for
age after age until they were suddenly cut off by
the Industrial Revolution. It is no more than
forty years since Morris and his fellows set out on
their campaign—little enough time for the reviving
of forgotten methods and lost ideals in all the
crafts, but the new centuries move more 'swiftly
than the old, and ground has been broken afresh
in many fields during this modern Renaissance.
The peculiar joy of craftsmanship lies in its
opportunities for exploring new processes and
perfecting old ones. Those who have read
Cellini’s delightful “Treatises on Goldsmithing ”
will remember the zest with which he describes, in
the minutest detail, every trick he discovered in his
many trades. This enthusiasm for process is the


CASKET IN SILVER AND ENAMEL (PRESENTED BY THE BOROUGH OF KEIGHLEY, YORKSHIRE). DESIGNED AND
EXECUTED BY HAROLD STABLER