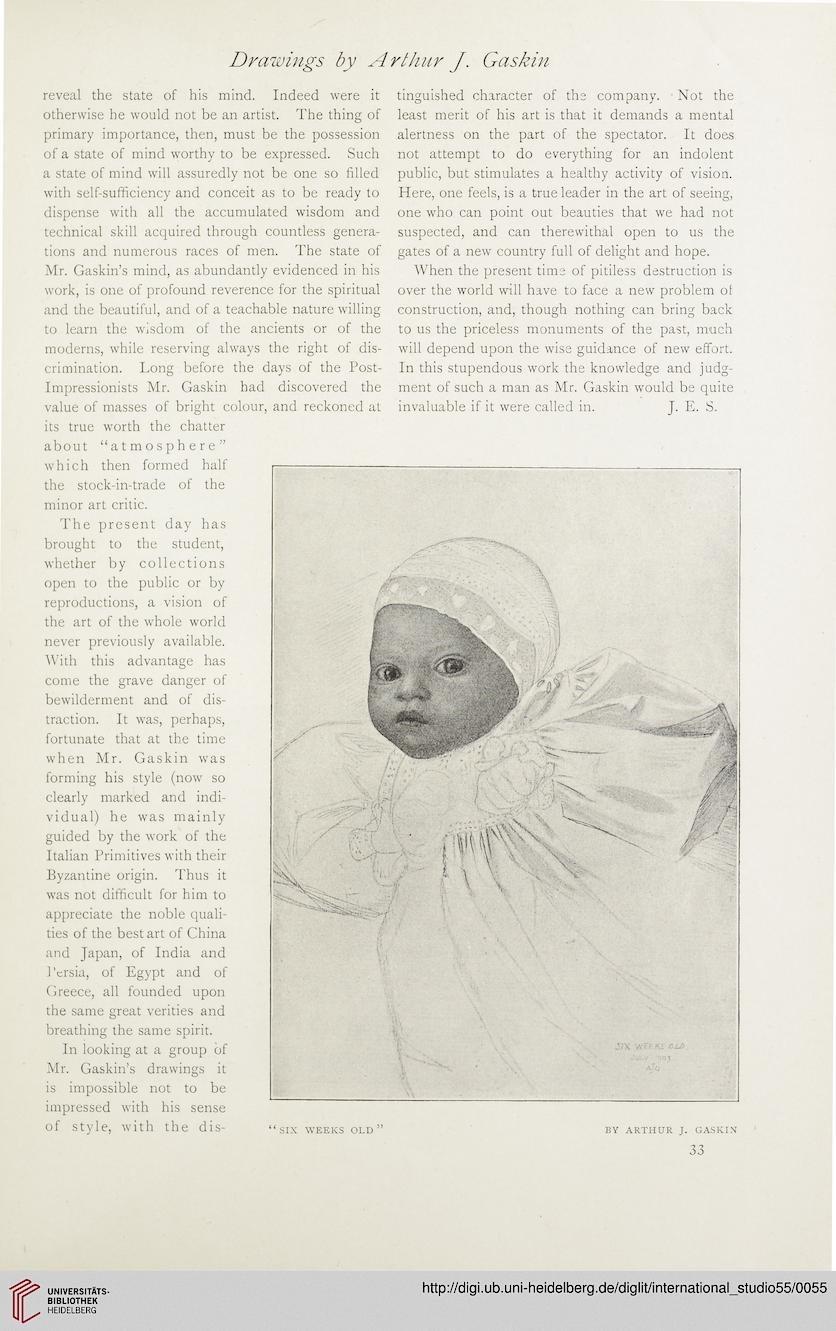 reveal the state of his mind. Indeed were it
otherwise he would not be an artist. The thing of
primary importance, then, must be the possession
of a state of mind worthy to be expressed. Such
a state of mind will assuredly not be one so filled
with self-sufficiency and conceit as to be ready to
dispense with all the accumulated wisdom and
technical skill acquired through countless genera-
tions and numerous races of men. The state of
Mr. Gaskin’s mind, as abundantly evidenced in his
work, is one of profound reverence for the spiritual
and the beautiful, and of a teachable nature willing
to learn the wisdom of the ancients or of the
moderns, while reserving always the right of dis-
crimination. Long before the days of the Post-
Impressionists Mr. Gaskin had discovered the
value of masses of bright colour, and reckoned at
its true worth the chatter
about “atmosphere”
which then formed half
the stock-in-trade of the
minor art critic.
The present day has
brought to the student,
whether by collections
open to the public or by
reproductions, a vision of
the art of the whole world
never previously available.
With this advantage has
come the grave danger of
bewilderment and of dis¬
traction. It was, perhaps,
fortunate that at the time
when Mr. Gaskin was
forming his style (now so
clearly marked and indi¬
vidual) he was mainly
guided by the work of the
Italian Primitives with their
Byzantine origin. Thus it
was not difficult for him to
appreciate the noble quali¬
ties of the best art of China
and Japan, of India and
Persia, of Egypt and of
Greece, all founded upon
the same great verities and
breathing the same spirit.
In looking at a group of
Mr. Gaskin’s drawings it
is impossible not to be
impressed with his sense
of style, with the dis-

tinguished character of the company. Not the
least merit of his art is that it demands a mental
alertness on the part of the spectator. It does
not attempt to do everything for an indolent
public, but stimulates a healthy activity of vision.
Here, one feels, is a true leader in the art of seeing,
one who can point out beauties that we had not
suspected, and can therewithal open to us the
gates of a new country full of delight and hope.
When the present time of pitiless destruction is
over the world will have to face a new problem of
construction, and, though nothing can bring back
to us the priceless monuments of the past, much
will depend upon the wise guidance of new effort.
In this stupendous work the knowledge and judg-
ment of such a man as Mr. Gaskin would be quite
invaluable if it were called in. J. E. S.