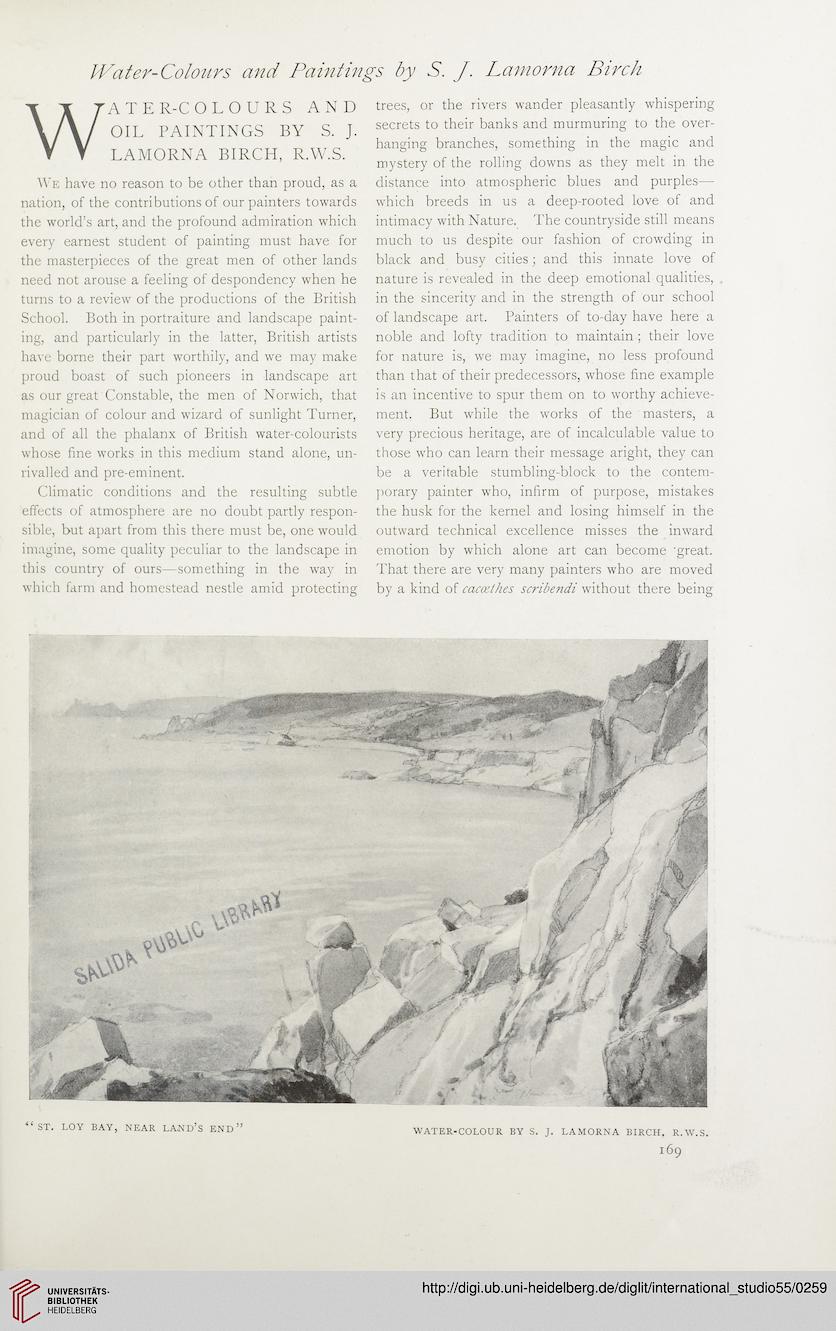 WA T E R-C OLOURS AND
OIL PAINTINGS BY S. J.
LAMORNA BIRCH, R.W.S.
We have no reason to be other than proud, as a
nation, of the contributions of our painters towards
the world’s art, and the profound admiration which
every earnest student of painting must have for
the masterpieces of the great men of other lands
need not arouse a feeling of despondency when he
turns to a review of the productions of the British
School. Both in portraiture and landscape paint-
ing, and particularly in the latter, British artists
have borne their part worthily, and we may make
proud boast of such pioneers in landscape art
as our great Constable, the men of Norwich, that
magician of colour and wizard of sunlight Turner,
and of all the phalanx of British water-colourists
whose fine works in this medium stand alone, un-
rivalled and pre-eminent.
Climatic conditions and the resulting subtle
effects of atmosphere are no doubt partly respon-
sible, but apart from this there must be, one would
imagine, some quality peculiar to the landscape in
this country of ours—something in the way in
which farm and homestead nestle amid protecting

trees, or the rivers wander pleasantly whispering
secrets to their banks and murmuring to the over-
hanging branches, something in the magic and
mystery of the rolling downs as they melt in the
distance into atmospheric blues and purples—
which breeds in us a deep-rooted love of and
intimacy with Nature. The countryside still means
much to us despite our fashion of crowding in
black and busy cities; and this innate love of
nature is revealed in the deep emotional qualities,
in the sincerity and in the strength of our school
of landscape art. Painters of to-day have here a
noble and lofty tradition to maintain ; their love
for nature is, we may imagine, no less profound
than that of their predecessors, whose fine example
is an incentive to spur them on to worthy achieve-
ment. But while the works of the masters, a
very precious heritage, are of incalculable value to
those who can learn their message aright, they can
be a veritable stumbling-block to the contem-
porary painter who, infirm of purpose, mistakes
the husk for the kernel and losing himself in the
outward technical excellence misses the inward
emotion by which alone art can become 'great.
That there are very many painters who are moved
by a kind of cacoethes scribendi without there being