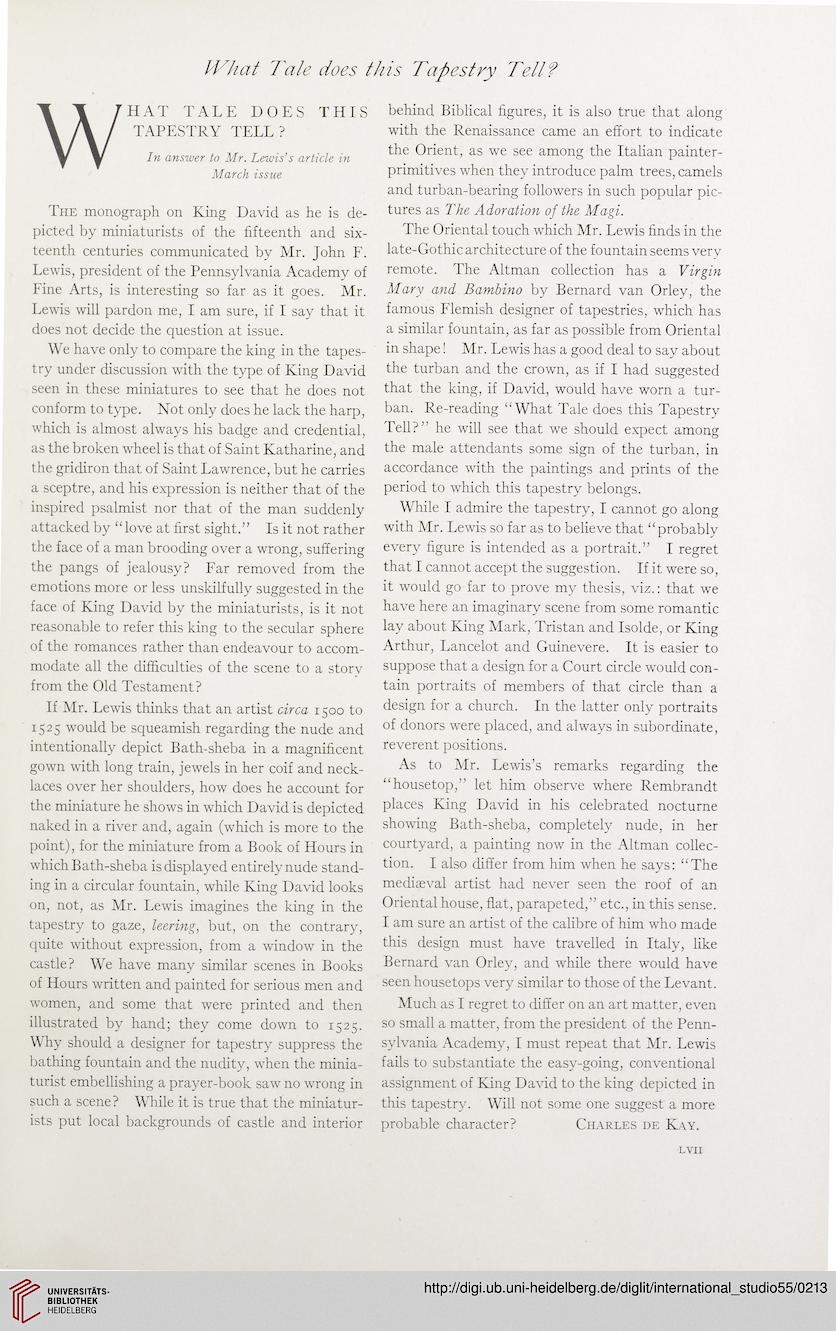 Information about OCR text
What Tale does this Tapestry Tell?

WHAT TALE DOES THIS
TAPESTRY TELL?
In answer to Mr. Lewis’s article in
March issue
The monograph on King David as he is de-
picted by miniaturists of the fifteenth and six-
teenth centuries communicated by Mr. John F.
Lewis, president of the Pennsylvania Academy of
Fine Arts, is interesting so far as it goes. Mr.
Lewis will pardon me, I am sure, if I say that it
does not decide the question at issue.
We have only to compare the king in the tapes-
try under discussion with the type of King David
seen in these miniatures to see that he does not
conform to type. Not only does he lack the harp,
which is almost always his badge and credential,
as the broken wheel is that of Saint Katharine, and
the gridiron that of Saint Lawrence, but he carries
a sceptre, and his expression is neither that of the
inspired psalmist nor that of the man suddenly
attacked by “love at first sight.” Is it not rather
the face of a man brooding over a wrong, suffering
the pangs of jealousy? Far removed from the
emotions more or less unskilfully suggested in the
face of King David by the miniaturists, is it not
reasonable to refer this king to the secular sphere
of the romances rather than endeavour to accom-
modate all the difficulties of the scene to a story
from the Old Testament?
If Mr. Lewis thinks that an artist circa 1500 to
1525 would be squeamish regarding the nude and
intentionally depict Bath-sheba in a magnificent
gown with long train, jewels in her coif and neck-
laces over her shoulders, how does he account for
the miniature he shows in which David is depicted
naked in a river and, again (which is more to the
point), for the miniature from a Book of Hours in
which Bath-sheba is displayed entirely nude stand-
ing in a circular fountain, while King David looks
on, not, as Mr. Lewis imagines the king in the
tapestry to gaze, leering, but, on the contrary,
quite without expression, from a window in the
castle? We have many similar scenes in Books
of Hours written and painted for serious men and
women, and some that were printed and then
illustrated by hand; they come down to 1525.
Why should a designer for tapestry suppress the
bathing fountain and the nudity, when the minia-
turist embellishing a prayer-book saw no wrong in
such a scene? While it is true that the miniatur-
ists put local backgrounds of castle and interior

behind Biblical figures, it is also true that along
with the Renaissance came an effort to indicate
the Orient, as we see among the Italian painter-
primitives when they introduce palm trees, camels
and turban-bearing followers in such popular pic-
tures as The Adoration of the Magi.
The Oriental touch which Mr. Lewis finds in the
late-Gothic architecture of the fountain seems very
remote. The Altman collection has a Virgin
Mary and Bambino by Bernard van Orley, the
famous Flemish designer of tapestries, which has
a similar fountain, as far as possible from Oriental
in shape! Mr. Lewis has a good deal to say about
the turban and the crown, as if I had suggested
that the king, if David, would have worn a tur-
ban. Re-reading “What Tale does this Tapestry
Tell?” he will see that we should expect among
the male attendants some sign of the turban, in
accordance with the paintings and prints of the
period to which this tapestry belongs.
While I admire the tapestry, I cannot go along
with Mr. Lewis so far as to believe that “probably
every figure is intended as a portrait.” I regret
that I cannot accept the suggestion. If it were so,
it would go far to prove my thesis, viz.: that we
have here an imaginary scene from some romantic
lay about King Mark, Tristan and Isolde, or King
Arthur, Lancelot and Guinevere. It is easier to
suppose that a design for a Court circle would con-
tain portraits of members of that circle than a
design for a church. In the latter only portraits
of donors were placed, and always in subordinate,
reverent positions.
As to Mr. Lewis’s remarks regarding the
“housetop,” let him observe where Rembrandt
places King David in his celebrated nocturne
showing Bath-sheba, completely nude, in her
courtyard, a painting now in the Altman collec-
tion. I also differ from him when he says: “The
mediaeval artist had never seen the roof of an
Oriental house, flat, parapeted,” etc., in this sense.
I am sure an artist of the calibre of him who made
this design must have travelled in Italy, like
Bernard van Orley, and while there would have
seen housetops very similar to those of the Levant.
Much as I regret to differ on an art matter, even
so small a matter, from the president of the Penn-
sylvania Academy, I must repeat that Mr. Lewis
fails to substantiate the easy-going, conventional
assignment of King David to the king depicted in
this tapestry. Will not some one suggest a more
probable character? Charles de Kay.