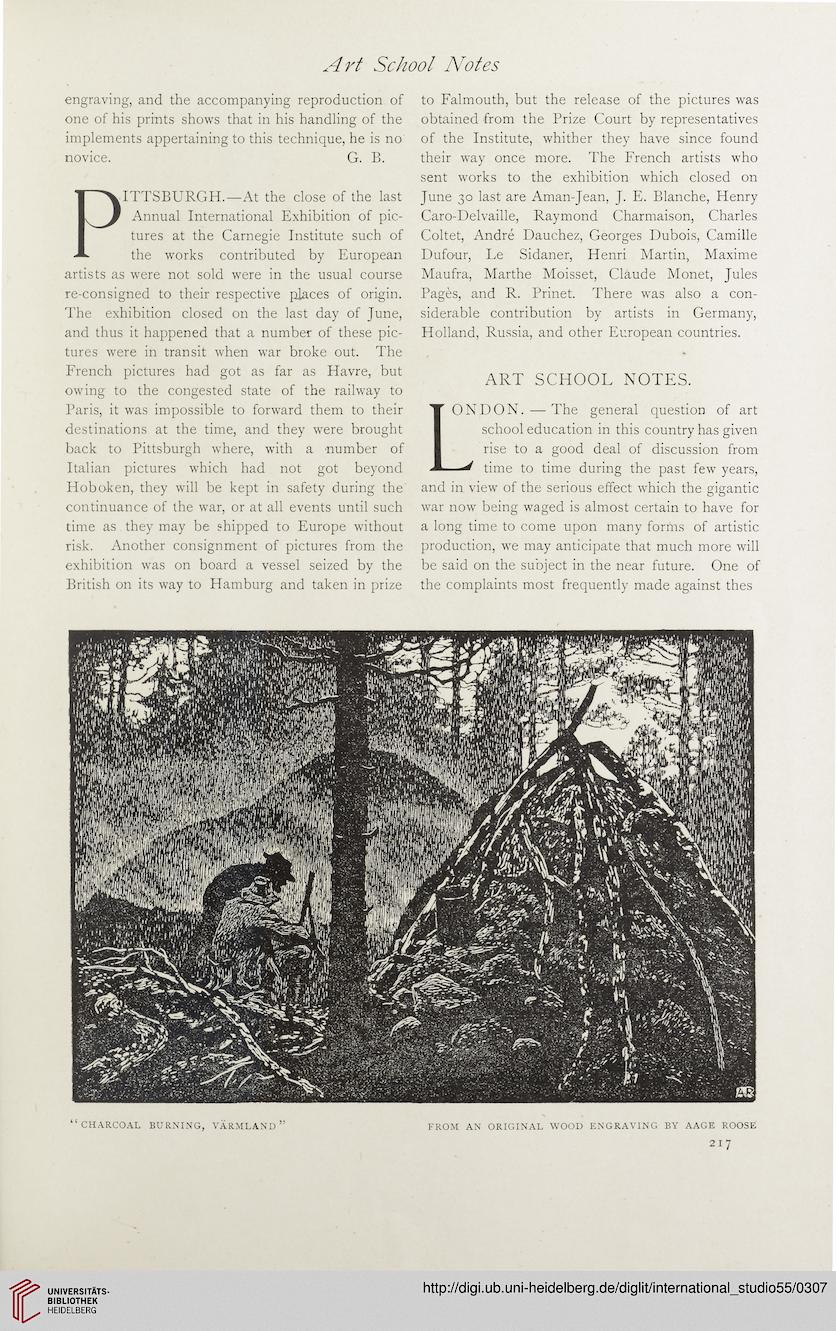 engraving, and the accompanying reproduction of
one of his prints shows that in his handling of the
implements appertaining to this technique, he is no
novice. G. B.
PITTSBURGH.—At the close of the last
Annual International Exhibition of pic-
tures at the Carnegie Institute such of
the works contributed by European
artists as were not sold were in the usual course
re-consigned to their respective places of origin.
The exhibition closed on the last day of June,
and thus it happened that a number of these pic-
tures were in transit when war broke out. The
French pictures had got as far as Havre, but
owing to the congested state of the railway to
Paris, it was impossible to forward them to their
destinations at the time, and they were brought
back to Pittsburgh where, with a number of
Italian pictures which had not got beyond
Hoboken, they will be kept in safety during the
continuance of the war, or at all events until such
time as they may be shipped to Europe without
risk. Another consignment of pictures from the
exhibition was on board a vessel seized by the
British on its way to Hamburg and taken in prize

to Falmouth, but the release of the pictures was
obtained from the Prize Court by representatives
of the Institute, whither they have since found
their way once more. The French artists who
sent works to the exhibition which closed on
June 30 last are Aman-Jean, J. E. Blanche, Henry
Caro-Delvaille, Raymond Charmaison, Charles
Coltet, Andre Dauchez, Georges Dubois, Camille
Dufour, Le Sidaner, Henri Martin, Maxime
Maufra, Marthe Moisset, Claude Monet, Jules
Pages, and R. Prinet. There was also a con-
siderable contribution by artists in Germany,
Holland, Russia, and other European countries.
ART SCHOOL NOTES.
I ON DON.—The general question of art
school education in this country has given
rise to a good deal of discussion from
—time to time during the past few years,
and in view of the serious effect which the gigantic
war now being waged is almost certain to have for
a long time to come upon many forms of artistic
production, we may anticipate that much more will
be said on the subject in the near future. One of
the complaints most frequently made against thes

FROM AN ORIGINAL WOOD ENGRAVING BY AAGE ROOSE
2 17