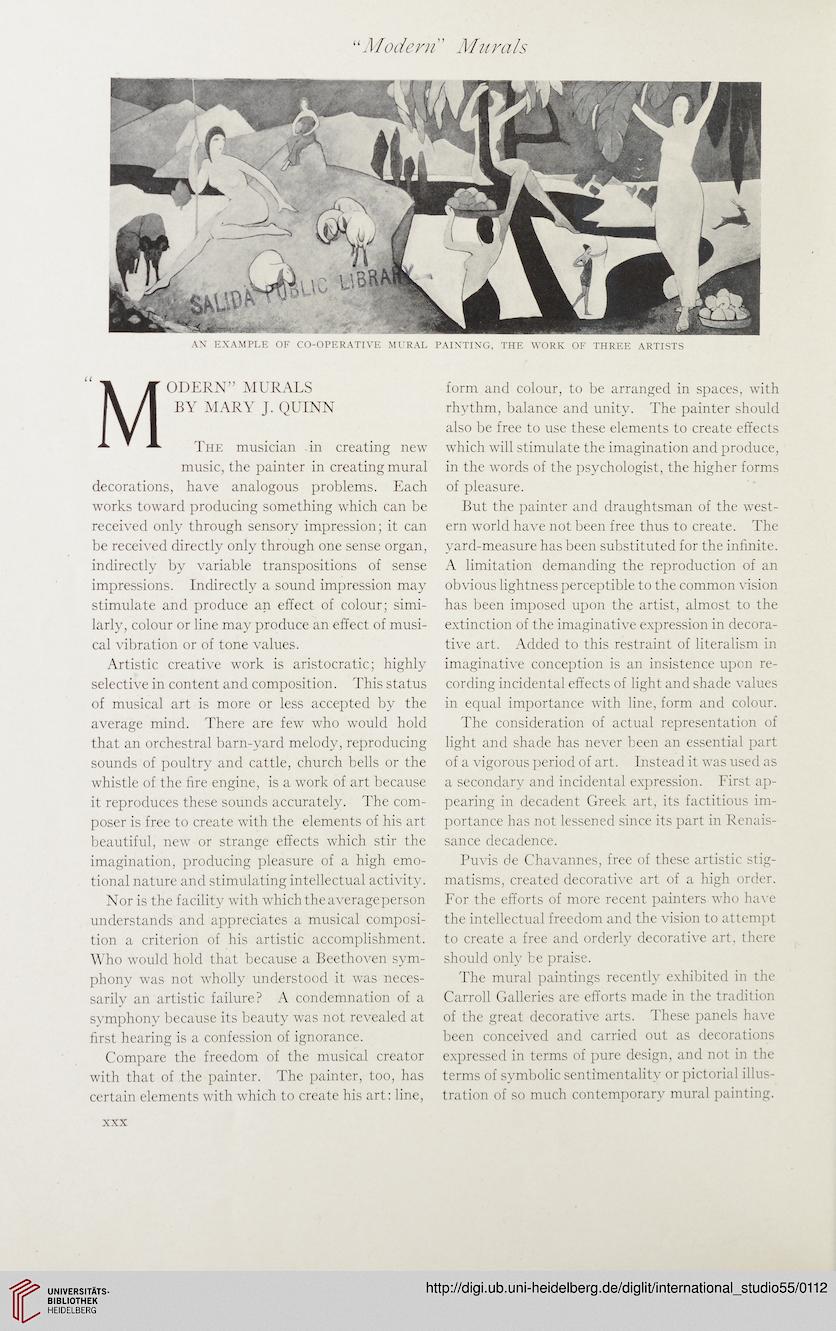 AN EXAMPLE OF CO-OPERATIVE MURAL PAINTING, THE WORK OF THREE ARTISTS


ODERN” MURALS
BY MARY J. QUINN
The musician in creating new
music, the painter in creating mural
decorations, have analogous problems. Each
works toward producing something which can be
received only through sensory impression; it can
be received directly only through one sense organ,
indirectly by variable transpositions of sense
impressions. Indirectly a sound impression may
stimulate and produce an effect of colour; simi-
larly, colour or line may produce an effect of musi-
cal vibration or of tone values.
Artistic creative work is aristocratic; highly
selective in content and composition. This status
of musical art is more or less accepted by the
average mind. There are few who would hold
that an orchestral barn-yard melody, reproducing
sounds of poultry and cattle, church bells or the
whistle of the fire engine, is a work of art because
it reproduces these sounds accurately. The com-
poser is free to create with the elements of his art
beautiful, new or strange effects which stir the
imagination, producing pleasure of a high emo-
tional nature and stimulating intellectual activity.
Nor is the facility with which the average person
understands and appreciates a musical composi-
tion a criterion of his artistic accomplishment.
Who would hold that because a Beethoven sym-
phony was not wholly understood it was neces-
sarily an artistic failure? A condemnation of a
symphony because its beauty was not revealed at
first hearing is a confession of ignorance.
Compare the freedom of the musical creator
with that of the painter. The painter, too, has
certain elements with which to create his art: line,

form and colour, to be arranged in spaces, with
rhythm, balance and unity. The painter should
also be free to use these elements to create effects
which will stimulate the imagination and produce,
in the words of the psychologist, the higher forms
of pleasure.
But the painter and draughtsman of the west-
ern world have not been free thus to create. The
yard-measure has been substituted for the infinite.
A limitation demanding the reproduction of an
obvious lightness perceptible to the common vision
has been imposed upon the artist, almost to the
extinction of the imaginative expression in decora-
tive art. Added to this restraint of literalism in
imaginative conception is an insistence upon re-
cording incidental effects of light and shade values
in equal importance with line, form and colour.
The consideration of actual representation of
light and shade has never been an essential part
of a vigorous period of art. Instead it was used as
a secondary and incidental expression. First ap-
pearing in decadent Greek art, its factitious im-
portance has not lessened since its part in Renais-
sance decadence.
Puvis de Chavannes, free of these artistic stig-
matisms, created decorative art of a high order.
For the efforts of more recent painters who have
the intellectual freedom and the vision to attempt
to create a free and orderly decorative art, there
should only be praise.
The mural paintings recently exhibited in the
Carroll Galleries are efforts made in the tradition
of the great decorative arts. These panels have
been conceived and carried out as decorations
expressed in terms of pure design, and not in the
terms of symbolic sentimentality or pictorial illus-
tration of so much contemporary mural painting.