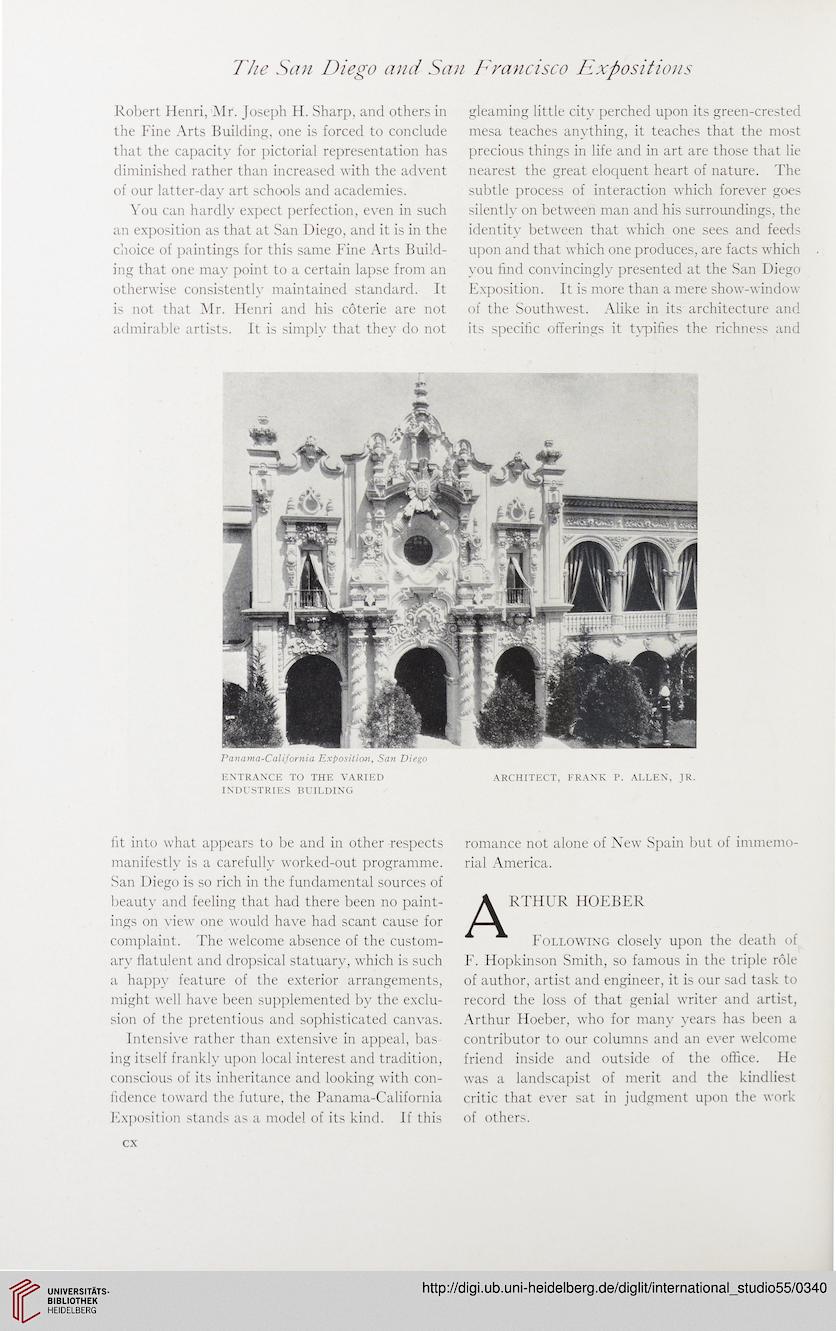 Robert Henri, Mr. Joseph H. Sharp, and others in
the Fine Arts Building, one is forced to conclude
that the capacity for pictorial representation has
diminished rather than increased with the advent
of our latter-day art schools and academies.
You can hardly expect perfection, even in such
an exposition as that at San Diego, and it is in the
choice of paintings for this same Fine Arts Build-
ing that one may point to a certain lapse from an
otherwise consistently maintained standard. It
is not that Mr. Henri and his coterie are not
admirable artists. It is simply that they do not

gleaming little city perched upon its green-crested
mesa teaches anything, it teaches that the most
precious things in life and in art are those that lie
nearest the great eloquent heart of nature. The
subtle process of interaction which forever goes
silently on between man and his surroundings, the
identity between that which one sees and feeds
upon and that which one produces, are facts which
you find convincingly presented at the San Diego
Exposition. It is more than a mere show-window
of the Southwest. Alike in its architecture and
its specific offerings it typifies the richness and


fit into what appears to be and in other respects
manifestly is a carefully worked-out programme.
San Diego is so rich in the fundamental sources of
beauty and feeling that had there been no paint-
ings on view one would have had scant cause for
complaint. The welcome absence of the custom-
ary flatulent and dropsical statuary, which is such
a happy feature of the exterior arrangements,
might well have been supplemented by the exclu-
sion of the pretentious and sophisticated canvas.
Intensive rather than extensive in appeal, bas
ing itself frankly upon local interest and tradition,
conscious of its inheritance and looking with con-
fidence toward the future, the Panama-California
Exposition stands as a model of its kind. If this

romance not alone of New Spain but of immemo-
rial America.
A RTHUR HOEBER
Following closely upon the death of
F. Hopkinson Smith, so famous in the triple role
of author, artist and engineer, it is our sad task to
record the loss of that genial writer and artist,
Arthur Hoeber, who for many years has been a
contributor to our columns and an ever welcome
friend inside and outside of the office. He
was a landscapist of merit and the kindliest
critic that ever sat in judgment upon the work
of others.