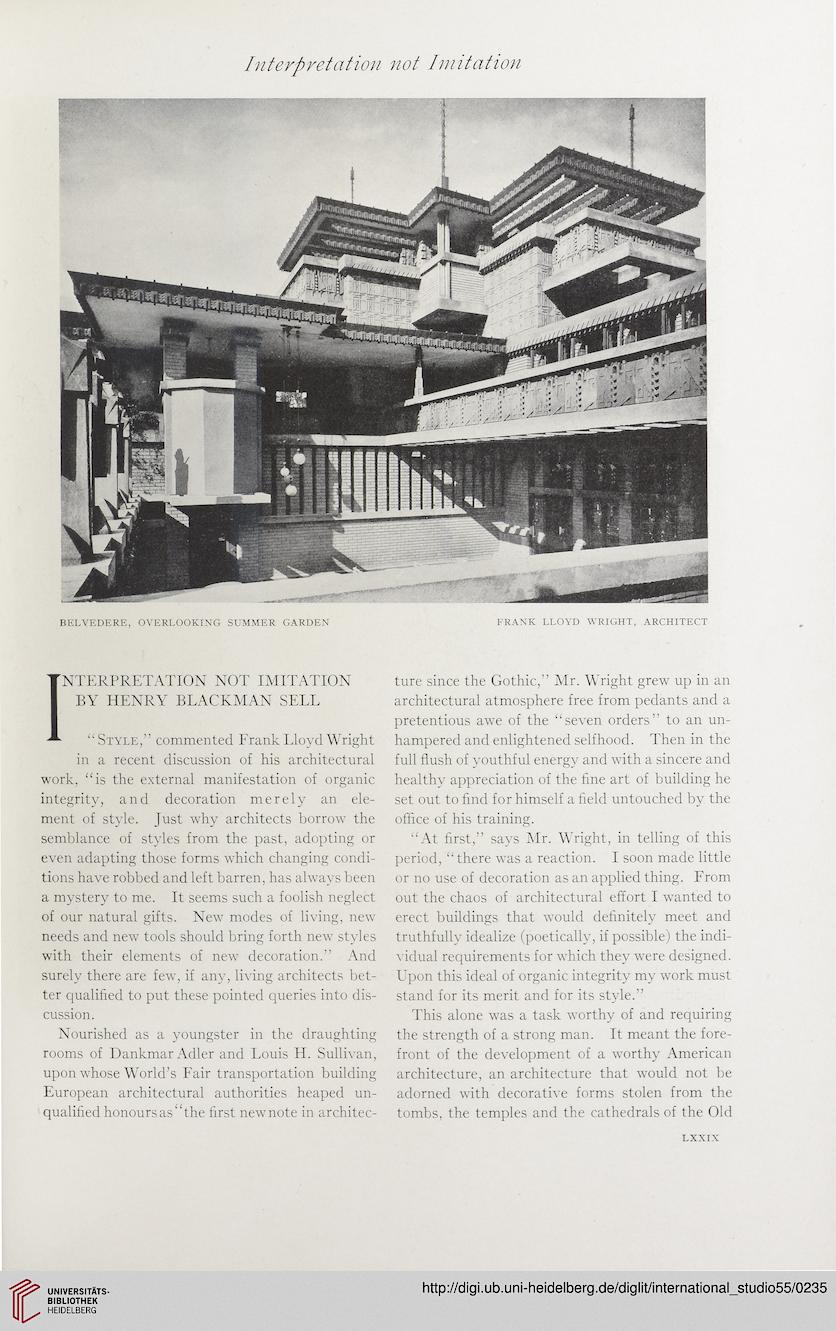 INTERPRETATION NOT IMITATION
BY HENRY BLACKMAN SELL
“Style,” commented Frank Lloyd Wright
in a recent discussion of his architectural
work, “is the external manifestation of organic
integrity, and decoration merely an ele-
ment of style. Just why architects borrow the
semblance of styles from the past, adopting or
even adapting those forms which changing condi-
tions have robbed and left barren, has always been
a mystery to me. It seems such a foolish neglect
of our natural gifts. New modes of living, new
needs and new tools should bring forth new styles
writh their elements of new decoration.” And
surely there are few, if any, living architects bet-
ter qualified to put these pointed queries into dis-
cussion.
Nourished as a youngster in the draughting
rooms of Dankmar Adler and Louis H. Sullivan,
upon whose World’s Fair transportation building
European architectural authorities heaped un-
qualified honours as “the first new note in architec-

ture since the Gothic,” Mr. Wright grew up in an
architectural atmosphere free from pedants and a
pretentious awe of the “seven orders” to an un-
hampered and enlightened selfhood. Then in the
full flush of youthful energy and with a sincere and
healthy appreciation of the fine art of building he
set out to find for himself a field untouched by the
office of his training.
“At first,” says Mr. Wright, in telling of this
period, “there was a reaction. I soon made little
or no use of decoration as an applied thing. From
out the chaos of architectural effort I wanted to
erect buildings that would definitely meet and
truthfully idealize (poetically, if possible) the indi-
vidual requirements for which they were designed.
Upon this ideal of organic integrity my work must
stand for its merit and for its style.”
This alone was a task worthy of and requiring
the strength of a strong man. It meant the fore-
front of the development of a worthy American
architecture, an architecture that would not be
adorned with decorative forms stolen from the
tombs, the temples and the cathedrals of the Old