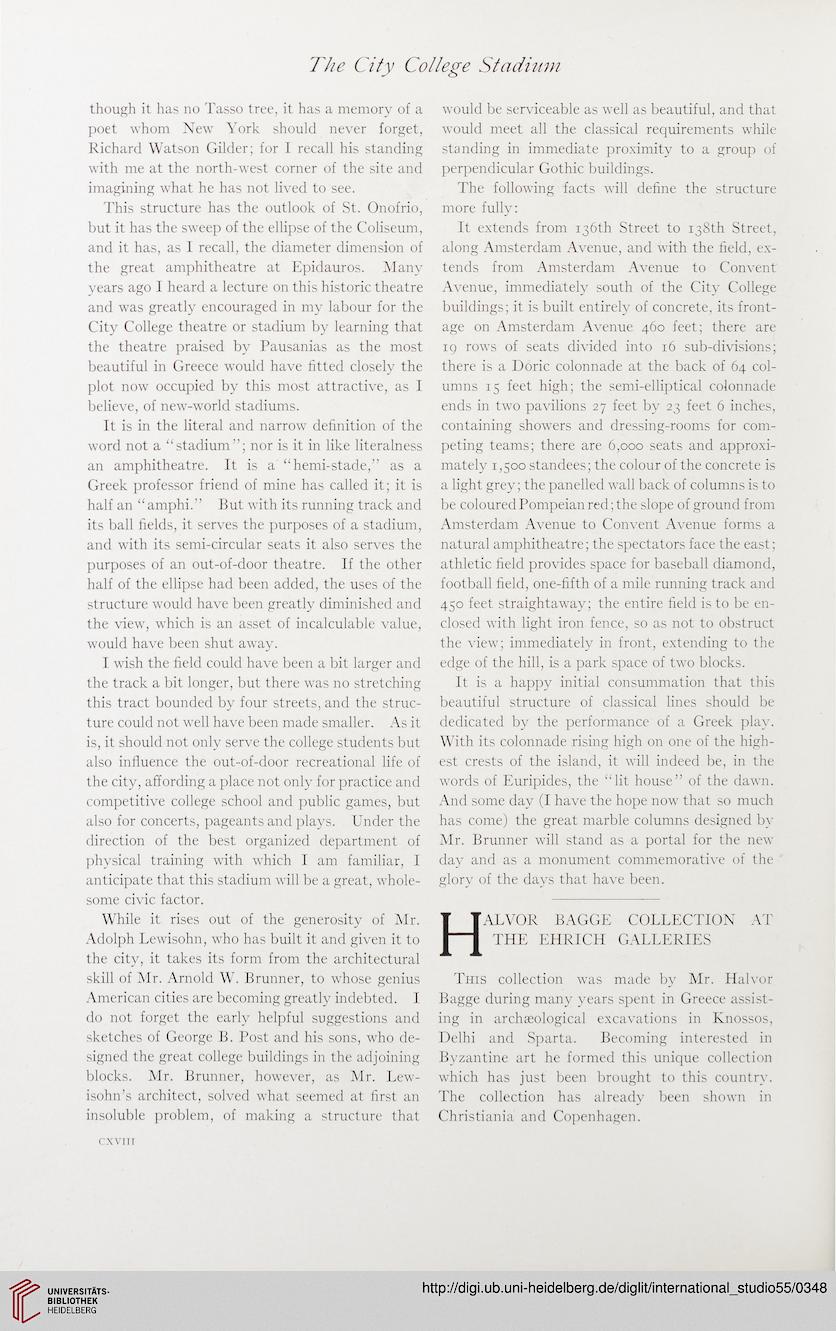 though it has no Tasso tree, it has a memory of a
poet whom New York should never forget,
Richard Watson Gilder; for I recall his standing
with me at the north-west corner of the site and
imagining what he has not lived to see.
This structure has the outlook of St. Onofrio,
but it has the sweep of the ellipse of the Coliseum,
and it has, as I recall, the diameter dimension of
the great amphitheatre at Epidauros. Many
years ago I heard a lecture on this historic theatre
and was greatly encouraged in my labour for the
City College theatre or stadium by learning that
the theatre praised by Pausanias as the most
beautiful in Greece would have fitted closely the
plot now occupied by this most attractive, as I
believe, of new-world stadiums.
It is in the literal and narrow definition of the
word not a “stadium”; nor is it in like literalness
an amphitheatre. It is a “hemi-stade,” as a
Greek professor friend of mine has called it; it is
half an “ amphi.” But with its running track and
its ball fields, it serves the purposes of a stadium,
and with its semi-circular seats it also serves the
purposes of an out-of-door theatre. If the other
half of the ellipse had been added, the uses of the
structure would have been greatly diminished and
the view, which is an asset of incalculable value,
would have been shut away.
I wish the field could have been a bit larger and
the track a bit longer, but there was no stretching
this tract bounded by four streets, and the struc-
ture could not well have been made smaller. As it
is, it should not only serve the college students but
also influence the out-of-door recreational life of
the city, affording a place not only for practice and
competitive college school and public games, but
also for concerts, pageants and plays. Under the
direction of the best organized department of
physical training with which I am familiar, I
anticipate that this stadium will be a great, whole-
some civic factor.
While it rises out of the generosity of Mr.
Adolph Lewisohn, who has built it and given it to
the city, it takes its form from the architectural
skill of Mr. Arnold W. Brunner, to whose genius
American cities are becoming greatly indebted. I
do not forget the early helpful suggestions and
sketches of George B. Post and his sons, who de-
signed the great college buildings in the adjoining
blocks. Mr. Brunner, however, as Air. Lew-
isohn’s architect, solved what seemed at first an
insoluble problem, of making a structure that

would be serviceable as well as beautiful, and that
would meet all the classical requirements while
standing in immediate proximity to a group of
perpendicular Gothic buildings.
The following facts will define the structure
more fully:
It extends from 136th Street to 138th Street,
along Amsterdam Avenue, and with the field, ex-
tends from Amsterdam Avenue to Convent
Avenue, immediately south of the City College
buildings; it is built entirely of concrete, its front-
age on Amsterdam Avenue 460 feet; there are
19 rows of seats divided into 16 sub-divisions;
there is a Doric colonnade at the back of 64 col-
umns 15 feet high; the semi-elliptical colonnade
ends in two pavilions 27 feet by 23 feet 6 inches,
containing showers and dressing-rooms for com-
peting teams; there are 6,000 seats and approxi-
mately 1,500 standees; the colour of the concrete is
a light grey; the panelled wall back of columns is to
be coloured Pompeian red; the slope of ground from
Amsterdam Avenue to Convent Avenue forms a
natural amphitheatre; the spectators face the east;
athletic field provides space for baseball diamond,
football field, one-fifth of a mile running track and
450 feet straightaway; the entire field is to be en-
closed with light iron fence, so as not to obstruct
the view; immediately in front, extending to the
edge of the hill, is a park space of two blocks.
It is a happy initial consummation that this
beautiful structure of classical lines should be
dedicated by the performance of a Greek play.
With its colonnade rising high on one of the high-
est crests of the island, it will indeed be, in the
words of Euripides, the “lit house” of the dawn.
And some day (I have the hope now that so much
has come) the great marble columns designed by
Mr. Brunner will stand as a portal for the new
day and as a monument commemorative of the
glory of the days that have been.

Halvor bagge collection at
THE EHRICH GALLERIES
This collection was made by Mr. Halvor
Bagge during many years spent in Greece assist-
ing in archaeological excavations in Knossos,
Delhi and Sparta. Becoming interested in
Byzantine art he formed this unique collection
which has just been brought to this country.
The collection has already been shown in
Christiania and Copenhagen.