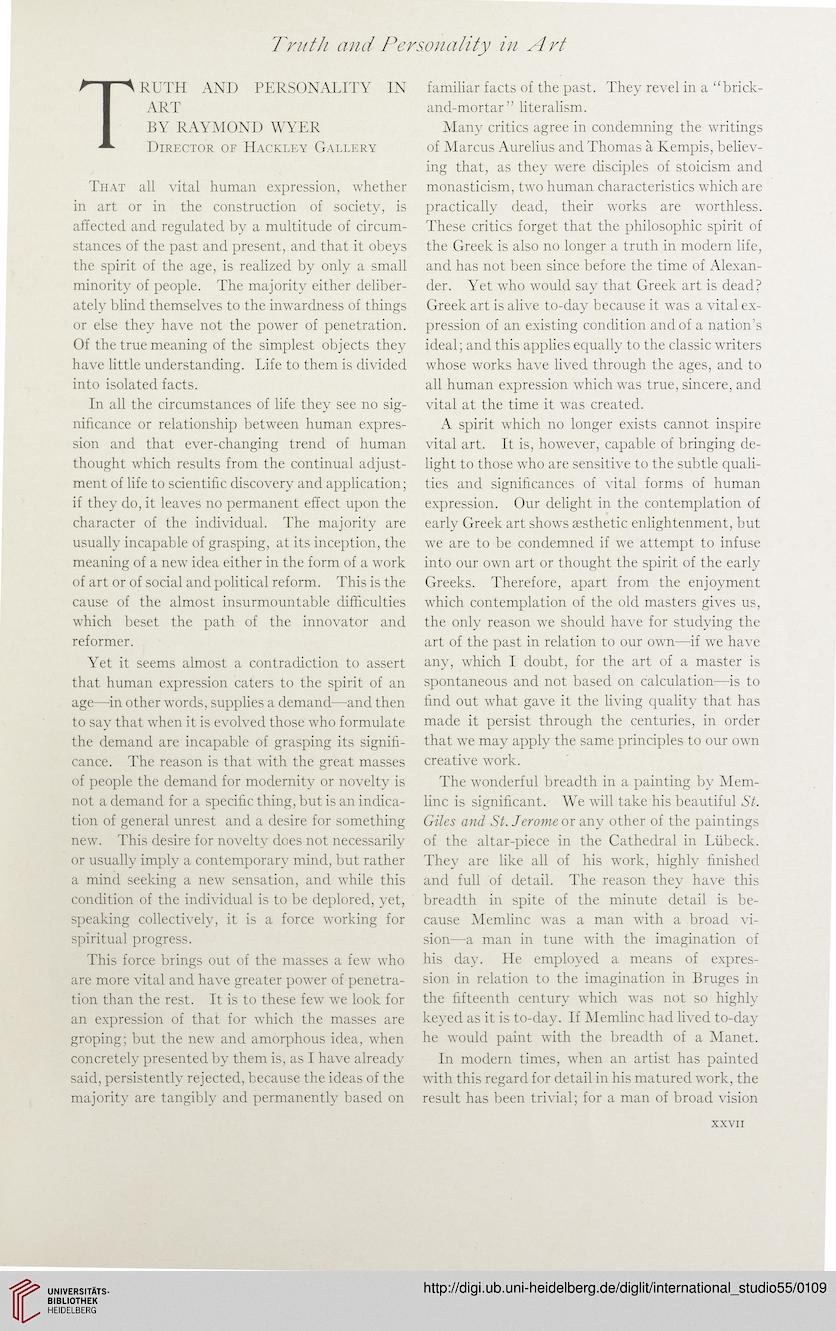 Information about OCR text
Truth and Personality in Art

Truth and personality in
ART
BY RAYMOND WYER
Director of Hackley Gallery
That all vital human, expression, whether
in art or in the construction of society, is
affected and regulated by a multitude of circum-
stances of the past and present, and that it obeys
the spirit of the age, is realized by only a small
minority of people. The majority either deliber-
ately blind themselves to the inwardness of things
or else they have not the power of penetration.
Of the true meaning of the simplest objects they
have little understanding. Life to them is divided
into isolated facts.
In all the circumstances of life they see no sig-
nificance or relationship between human expres-
sion and that ever-changing trend of human
thought which results from the continual adjust-
ment of life to scientific discovery and application;
if they do, it leaves no permanent effect upon the
character of the individual. The majority are
usually incapable of grasping, at its inception, the
meaning of a new idea either in the form of a work
of art or of social and political reform. This is the
cause of the almost insurmountable difficulties
which beset the path of the innovator and
reformer.
Yet it seems almost a contradiction to assert
that human expression caters to the spirit of an
age—in other words, supplies a demand—and then
to say that when it is evolved those who formulate
the demand are incapable of grasping its signifi-
cance. The reason is that with the great masses
of people the demand for modernity or novelty is
not a demand for a specific thing, but is an indica-
tion of general unrest and a desire for something
new. This desire for novelty does not necessarily
or usually imply a contemporary mind, but rather
a mind seeking a new sensation, and while this
condition of the individual is to be deplored, yet,
speaking collectively, it is a force working for
spiritual progress.
This force brings out of the masses a few who
are more vital and have greater power of penetra-
tion than the rest. It is to these few we look for
an expression of that for which the masses are
groping; but the new and amorphous idea, when
concretely presented by them is, as I have already
said, persistently rejected, because the ideas of the
majority are tangibly and permanently based on

familiar facts of the past. They revel in a “brick-
and-mortar” literalism.
Many critics agree in condemning the writings
of Marcus Aurelius and Thomas a Kempis, believ-
ing that, as they were disciples of stoicism and
monasticism, two human characteristics which are
practically dead, their works are worthless.
These critics forget that the philosophic spirit of
the Greek is also no longer a truth in modern life,
and has not been since before the time of Alexan-
der. Yet who would say that Greek art is dead?
Greek art is alive to-day because it was a vital ex-
pression of an existing condition and of a nation’s
ideal; and this applies equally to the classic writers
whose works have lived through the ages, and to
all human expression which was true, sincere, and
vital at the time it was created.
A spirit which no longer exists cannot inspire
vital art. It is, however, capable of bringing de-
light to those who are sensitive to the subtle quali-
ties and significances of vital forms of human
expression. Our delight in the contemplation of
early Greek art shows aesthetic enlightenment, but
we are to be condemned if we attempt to infuse
into our own art or thought the spirit of the early
Greeks. Therefore, apart from the enjoyment
which contemplation of the old masters gives us,
the only reason we should have for studying the
art of the past in relation to our own—if we have
any, which I doubt, for the art of a master is
spontaneous and not based on calculation—is to
find out what gave it the living quality that has
made it persist through the centuries, in order
that we may apply the same principles to our own
creative work.
The wonderful breadth in a painting by Mem-
linc is significant. We will take his beautiful S/.
Giles and St. Jerome ox any other of the paintings
of the altar-piece in the Cathedral in Lubeck.
They are like all of his work, highly finished
and full of detail. The reason they have this
breadth in spite of the minute detail is be-
cause Memlinc was a man with a broad vi-
sion—a man in tune with the imagination of
his day. He employed a means of expres-
sion in relation to the imagination in Bruges in
the fifteenth century which was not so highly
keyed as it is to-day. If Memlinc had lived to-day
he would paint with the breadth of a Manet.
In modern times, when an artist has painted
with this regard for detail in his matured work, the
result has been trivial; for a man of broad vision