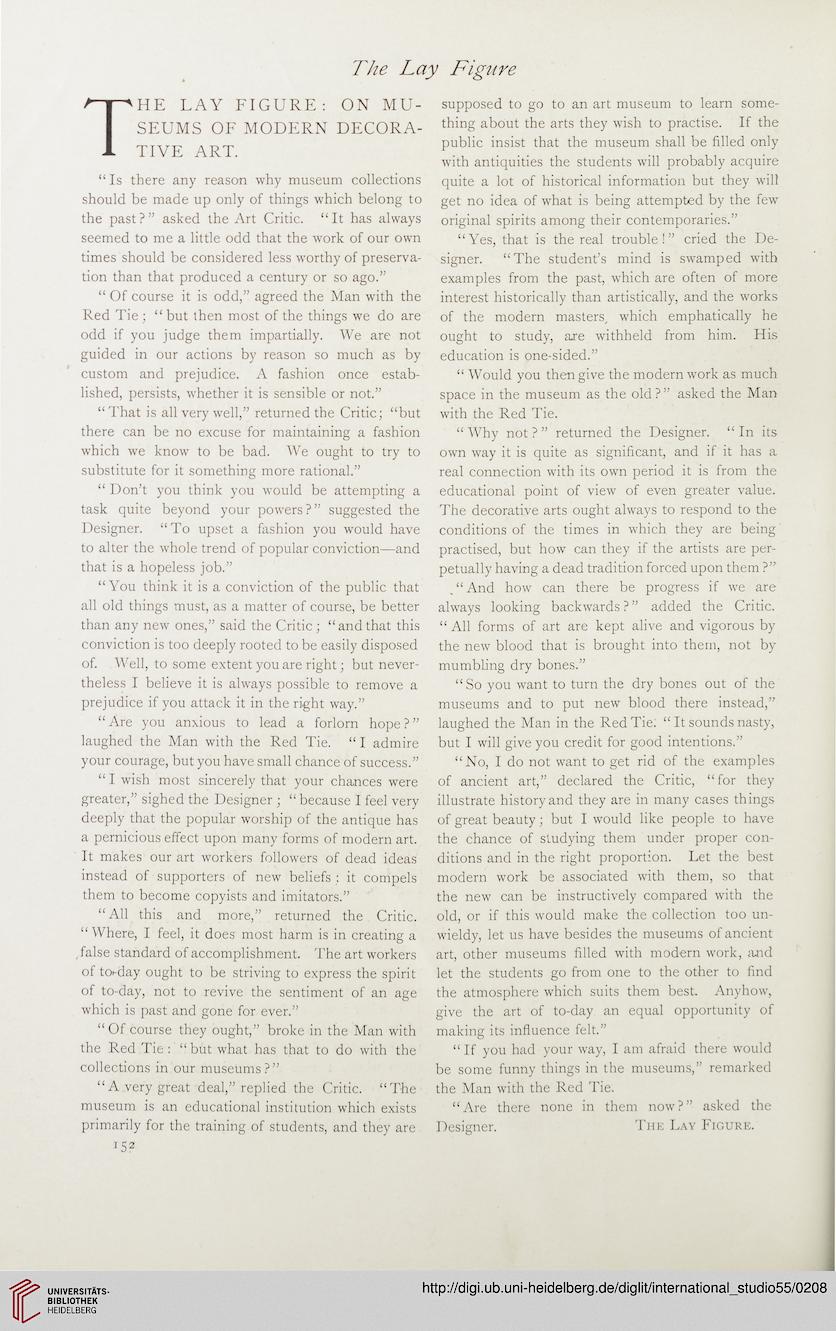 THE LAY FIGURE: ON MU¬
SEUMS OF MODERN DECORA-
TIVE ART.
“ Is there any reason why museum collections
should be made up only of things which belong to
the past?” asked the Art Critic. “It has always
seemed to me a little odd that the work of our own
times should be considered less worthy of preserva-
tion than that produced a century or so ago.”
“ Of course it is odd,” agreed the Man with the
Red Tie ; “ but then most of the things we do are
odd if you judge them impartially. We are not
guided in our actions by reason so much as by
custom and prejudice. A fashion once estab-
lished, persists, whether it is sensible or not.”
“ That is all very well,” returned the Critic; “but
there can be no excuse for maintaining a fashion
which we know to be bad. We ought to try to
substitute for it something more rational.”
“ Don’t you think you would be attempting a
task quite beyond your powers?” suggested the
Designer. “To upset a fashion you would have
to alter the whole trend of popular conviction—and
that is a hopeless job.”
“You think it is a conviction of the public that
all old things must, as a matter of course, be better
than any new ones,” said the Critic ; “and that this
conviction is too deeply rooted to be easily disposed
of. Well, to some extent you are right; but never-
theless I believe it is always possible to remove a
prejudice if you attack it in the right way.”
“Are you anxious to lead a forlorn hope?”
laughed the Man with the Red Tie. “ I admire
your courage, but you have small chance of success.”
“ I wish most sincerely that your chances were
greater,” sighed the Designer ; “ because I feel very
deeply that the popular worship of the antique has
a pernicious effect upon many forms of modern art.
It makes our art workers followers of dead ideas
instead of supporters of new beliefs ; it compels
them to become copyists and imitators.”
“All this and more,” returned the Critic.
“ Where, I feel, it does most harm is in creating a
false standard of accomplishment. The art workers
of to>-day ought to be striving to express the spirit
of to-day, not to revive the sentiment of an age
which is past and gone for ever.”
“Of course they ought,” broke in the Man with
the Red Tie : “ but what has that to do with the
collections in our museums?”
“A very great deal,” replied the Critic. “The
museum is an educational institution which exists
primarily for the training of students, and they are
U?

supposed to go to an art museum to learn some-
thing about the arts they wish to practise. If the
public insist that the museum shall be filled only
with antiquities the students will probably acquire
quite a lot of historical information but they will
get no idea of what is being attempted by the few
original spirits among their contemporaries.”
“Yes, that is the real trouble!” cried the De-
signer. “The student’s mind is swamped with
examples from the past, which are often of more
interest historically than artistically, and the works
of the modern masters, which emphatically he
ought to study, are withheld from him. His
education is one-sided.”
“ Would you then give the modern work as much
space in the museum as the old?” asked the Man
with the Red Tie.
“Why not?” returned the Designer. “In its
own way it is quite as significant, and if it has a
real connection with its own period it is from the
educational point of view of even greater value.
The decorative arts ought always to respond to the
conditions of the times in which they are being
practised, but how can they if the artists are per-
petually having a dead tradition forced upon them ?”
.“And how can there be progress if we are
always looking backwards?” added the Critic.
“ All forms of art are kept alive and vigorous by
the new blood that is brought into them, not by
mumbling dry bones.”
“So you want to turn the dry bones out of the
museums and to put new blood there instead,”
laughed the Man in the Red Tie. “ It sounds nasty,
but I will give you credit for good intentions.”
“No, I do not want to get rid of the examples
of ancient art,” declared the Critic, “for they
illustrate history and they are in many cases things
of great beauty; but I would like people to have
the chance of studying them under proper con-
ditions and in the right proportion. Let the best
modern work be associated with them, so that
the new can be instructively compared with the
old, or if this would make the collection too un-
wieldy, let us have besides the museums of ancient
art, other museums filled with modern work, and
let the students go from one to the other to find
the atmosphere which suits them best. Anyhow,
give the art of to-day an equal opportunity of
making its influence felt.”
“ If you had your way, I am afraid there would
be some funny things in the museums,” remarked
the Man with the Red Tie.
“Are there none in them now?” asked the
Designer. The Lay Figure.