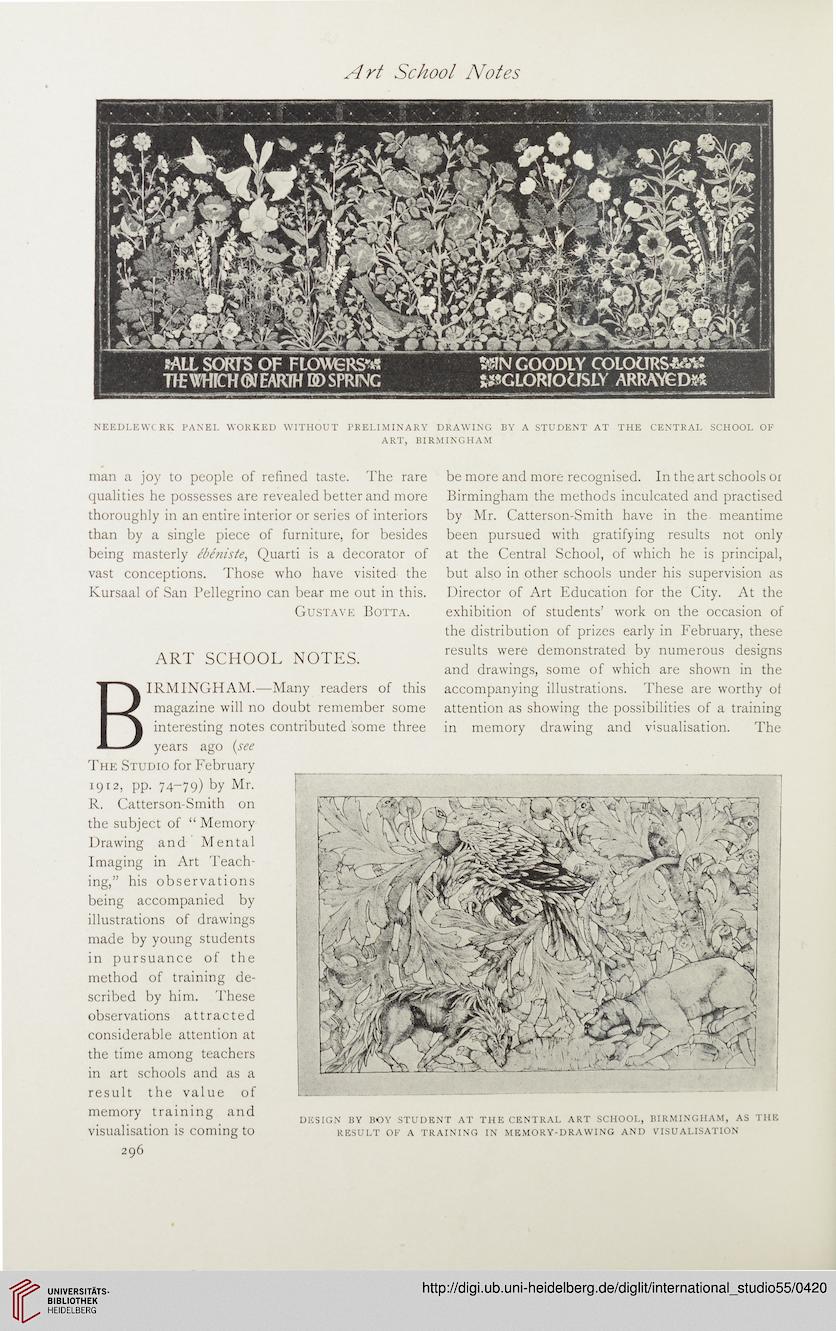 NEEDLEWCRK PANEL WORKED WITHOUT PRELIMINARY DRAWING BY A STUDENT AT THE CENTRAL SCHOOL OF
ART, BIRMINGHAM

man a joy to people of refined taste. The rare
qualities he possesses are revealed better and more
thoroughly in an entire interior or series of interiors
than by a single piece of furniture, for besides
being masterly ebeniste, Quarti is a decorator of
vast conceptions. Those who have visited the
Kursaal of San Pellegrino can bear me out in this.
Gustave Botta.
ART SCHOOL NOTES.
IRMINGHAM.—Many readers of this
magazine will no doubt remember some
interesting notes contributed some three
years ago (see
The Studio for February
1912, pp. 74-79) by Mr-
R. Catterson-Smith on
the subject of “ Memory
Drawing and Mental
Imaging in Art Teach¬
ing,” his observations
being accompanied by
illustrations of drawings
made by young students
in pursuance of the
method of training de-
scribed by him. These
observations attracted
considerable attention at
the time among teachers
in art schools and as a
result the value of
memory training and
visualisation is coming to
296

be more and more recognised. In the art schools 01
Birmingham the methods inculcated and practised
by Mr. Catterson-Smith have in the meantime
been pursued with gratifying results not only
at the Central School, of which he is principal,
but also in other schools under his supervision as
Director of Art Education for the City. At the
exhibition of students’ work on the occasion of
the distribution of prizes early in February, these
results were demonstrated by numerous designs
and drawings, some of which are shown in the
accompanying illustrations. These are worthy of
attention as showing the possibilities of a training
in memory drawing and visualisation. The


DESIGN BY BOY STUDENT AT THE CENTRAL ART SCHOOL, BIRMINGHAM, AS THE
RESULT OF A TRAINING IN MEMORY-DRAWING AND VISUALISATION