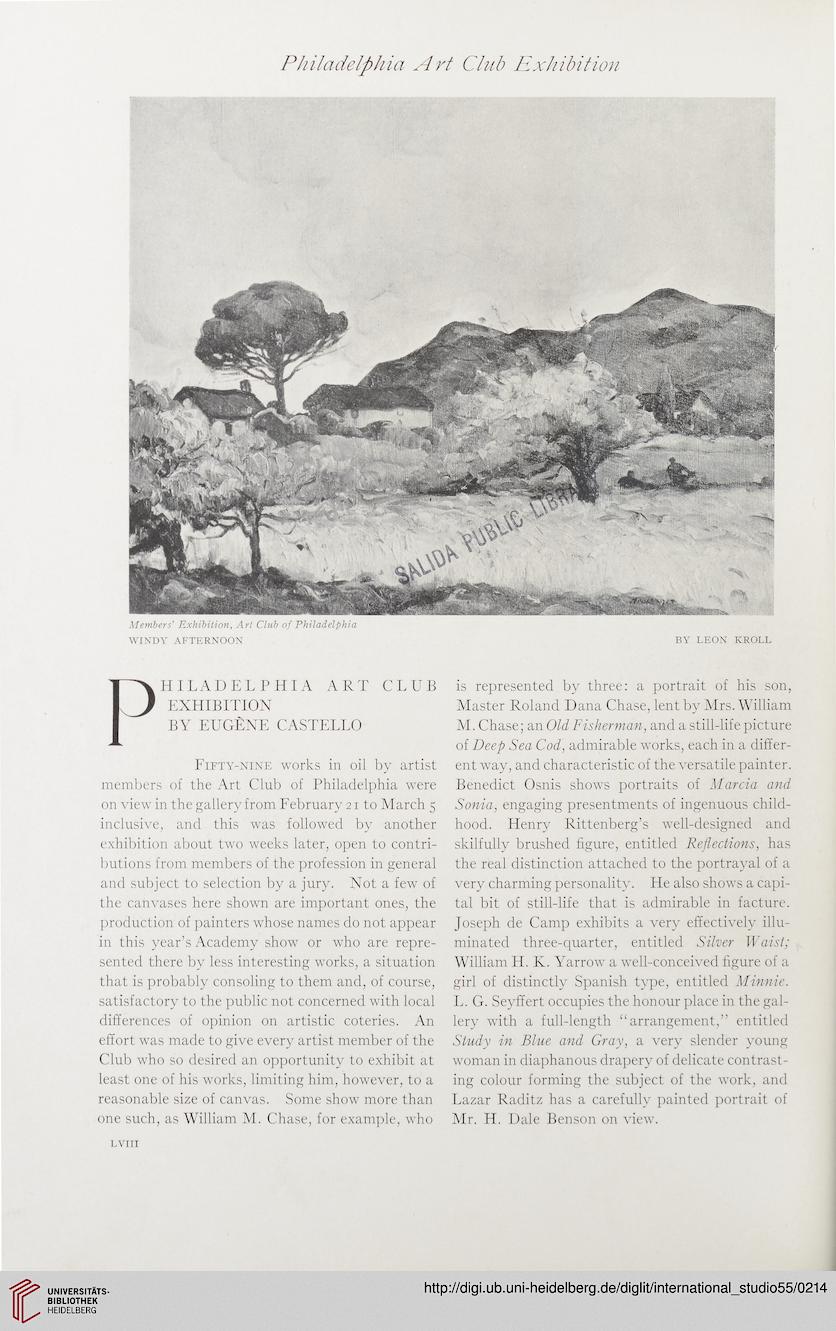 
Philadelphia art club
exhibition
BY EUGENE CASTELLO
Fifty-nine works in oil by artist
members of the Art Club of Philadelphia were
on view in the gallery from February 21 to March 5
inclusive, and this was followed by another
exhibition about two weeks later, open to contri-
butions from members of the profession in general
and subject to selection by a jury. Not a few of
the canvases here shown are important ones, the
production of painters whose names do not appear
in this year’s Academy show or who are repre-
sented there by less interesting works, a situation
that is probably consoling to them and, of course,
satisfactory to the public not concerned with local
differences of opinion on artistic coteries. An
effort was made to give every artist member of the
Club who so desired an opportunity to exhibit at
least one of his works, limiting him, however, to a
reasonable size of canvas. Some show more than
one such, as William M. Chase, for example, who

is represented by three: a portrait of his son,
Master Roland Dana Chase, lent by Mrs. William
M. Chase; an Old Fisherman, and a still-life picture
of Deep Sea Cod, admirable works, each in a differ-
ent way, and characteristic of the versatile painter.
Benedict Osnis shows portraits of Marcia and
Sonia, engaging presentments of ingenuous child-
hood. Henry Rittenberg’s well-designed and
skilfully brushed figure, entitled Reflections, has
the real distinction attached to the portrayal of a
very charming personality. He also shows a capi-
tal bit of still-life that is admirable in facture.
Joseph de Camp exhibits a very effectively illu-
minated three-quarter, entitled Silver Waist;
William H. K. Yarrow a well-conceived figure of a
girl of distinctly Spanish type, entitled Minnie.
L. G. Seyffert occupies the honour place in the gal-
lery with a full-length “arrangement,” entitled
Study in Blue and Gray, a very slender young
woman in diaphanous drapery of delicate contrast-
ing colour forming the subject of the work, and
Lazar Raditz has a carefully painted portrait of
Mr. H. Dale Benson on view.