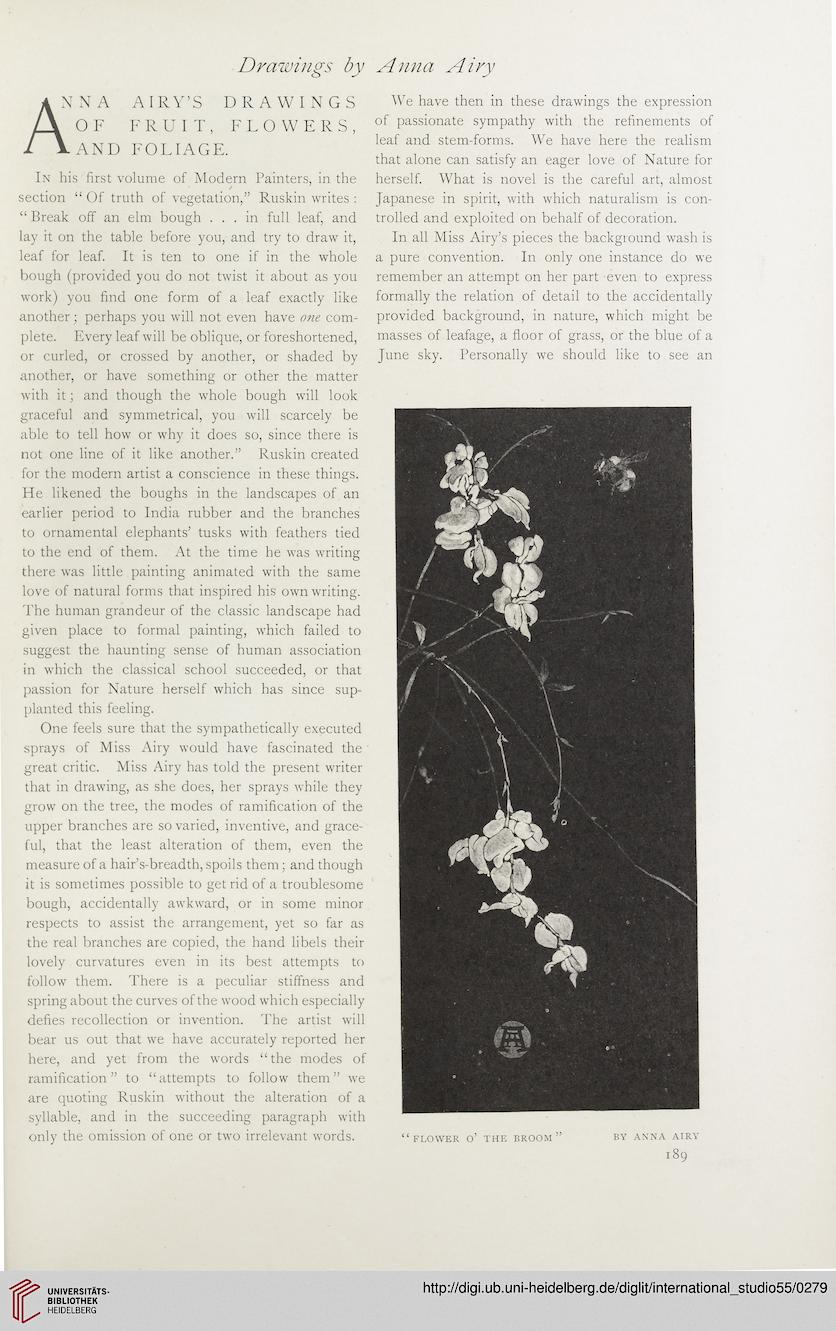 Anna airy’s drawings
OF FRUIT, FLOWERS,
Land foliage.
In his first volume of Modern Painters, in the
section “ Of truth of vegetation,” Ruskin writes :
“ Break off an elm bough ... in full leaf, and
lay it on the table before you, and try to draw it,
leaf for leaf. It is ten to one if in the whole
bough (provided you do not twist it about as you
work) you find one form of a leaf exactly like
another; perhaps you will not even have one com-
plete. Every leaf will be oblique, or foreshortened,
or curled, or crossed by another, or shaded by
another, or have something or other the matter
with it; and though the whole bough will look
graceful and symmetrical, you will scarcely be
able to tell how or why it does so, since there is
not one line of it like another.” Ruskin created
for the modern artist a conscience in these things.
He likened the boughs in the landscapes of an
earlier period to India rubber and the branches
to ornamental elephants’ tusks with feathers tied
to the end of them. At the time he was writing
there was little painting animated with the same
love of natural forms that inspired his own writing.
The human grandeur of the classic landscape had
given place to formal painting, which failed to
suggest the haunting sense of human association
in which the classical school succeeded, or that
passion for Nature herself which has since sup-
planted this feeling.
One feels sure that the sympathetically executed
sprays of Miss Airy would have fascinated the
great critic. Miss Airy has told the present writer
that in drawing, as she does, her sprays while they
grow on the tree, the modes of ramification of the
upper branches are so varied, inventive, and grace-
ful, that the least alteration of them, even the
measure of a hair’s-breadth, spoils them; and though
it is sometimes possible to get rid of a troublesome
bough, accidentally awkward, or in some minor
respects to assist the arrangement, yet so far as
the real branches are copied, the hand libels their
lovely curvatures even in its best attempts to
follow them. There is a peculiar stiffness and
spring about the curves of the wood which especially
defies recollection or invention. The artist will
bear us out that we have accurately reported her
here, and yet from the words “the modes of
ramification” to “attempts to follow them” we
are quoting Ruskin without the alteration of a
syllable, and in the succeeding paragraph with
only the omission of one or two irrelevant words.

We have then in these drawings the expression
of passionate sympathy with the refinements of
leaf and stem-forms. We have here the realism
that alone can satisfy an eager love of Nature for
herself. What is novel is the careful art, almost
Japanese in spirit, with which naturalism is con-
trolled and exploited on behalf of decoration.
In all Miss Airy’s pieces the background wash is
a pure convention. In only one instance do we
remember an attempt on her part even to express
formally the relation of detail to the accidentally
provided background, in nature, which might be
masses of leafage, a floor of grass, or the blue of a
June sky. Personally we should like to see an