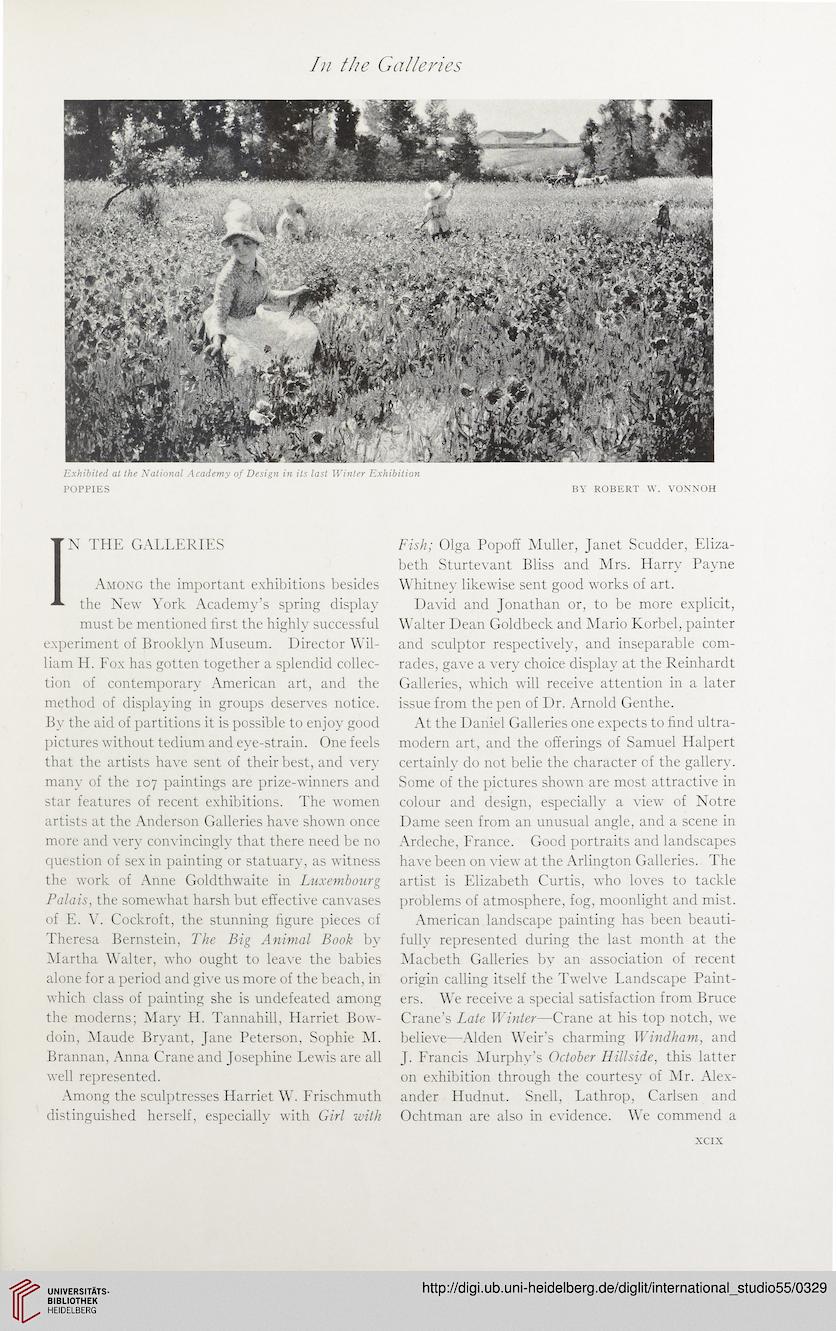 Exhibited at the National Academy of Design in its last Winter Exhibition
POPPIES BY ROBERT W. VONNOH


IN THE GALLERIES
Among the important exhibitions besides
the New York Academy’s spring display
must be mentioned first the highly successful
experiment of Brooklyn Museum. Director Wil-
liam H. Fox has gotten together a splendid collec-
tion of contemporary American art, and the
method of displaying in groups deserves notice.
By the aid of partitions it is possible to enjoy good
pictures without tedium and eye-strain. One feels
that the artists have sent of their best, and very
many of the 107 paintings are prize-winners and
star features of recent exhibitions. The women
artists at the Anderson Galleries have shown once
more and very convincingly that there need be no
question of sex in painting or statuary, as witness
the work of Anne Goldthwaite in Luxembourg
Palais, the somewhat harsh but effective canvases
of E. V. Cockroft, the stunning figure pieces cf
Theresa Bernstein, The Big Animal Book by
Martha Walter, who ought to leave the babies
alone for a period and give us more of the beach, in
which class of painting she is undefeated among
the moderns; Mary H. Tannahill, Harriet Bow-
doin, Maude Bryant, Jane Peterson, Sophie M.
Brannan, Anna Crane and Josephine Lewis are all
well represented.
Among the sculptresses Harriet W. Frischmuth
distinguished herself, especially with Girl with

Fish; Olga Popoff Muller, Janet Scudder, Eliza-
beth Sturtevant Bliss and Mrs. Harry Payne
Whitney likewise sent good works of art.
David and Jonathan or, to be more explicit,
Walter Dean Goldbeck and Mario Korbel, painter
and sculptor respectively, and inseparable com-
rades, gave a very choice display at the Reinhardt
Galleries, which will receive attention in a later
issue from the pen of Dr. Arnold Genthe.
At the Daniel Galleries one expects to find ultra-
modern art, and the offerings of Samuel Halpert
certainly do not belie the character of the gallery.
Some of the pictures shown are most attractive in
colour and design, especially a view of Notre
Dame seen from an unusual angle, and a scene in
Ardeche, France. Good portraits and landscapes
have been on view at the Arlington Galleries. The
artist is Elizabeth Curtis, who loves to tackle
problems of atmosphere, fog, moonlight and mist.
American landscape painting has been beauti-
fully represented during the last month at the
Macbeth Galleries by an association of recent
origin calling itself the Twelve Landscape Paint-
ers. We receive a special satisfaction from Bruce
Crane’s Late Winter—Crane at his top notch, we
believe—Alden Weir’s charming Windham, and
J. Francis Murphy’s October Hillside, this latter
on exhibition through the courtesy of Mr. Alex-
ander Hudnut. Snell, Lathrop, Carlsen and
Ochtman are also in evidence. We commend a