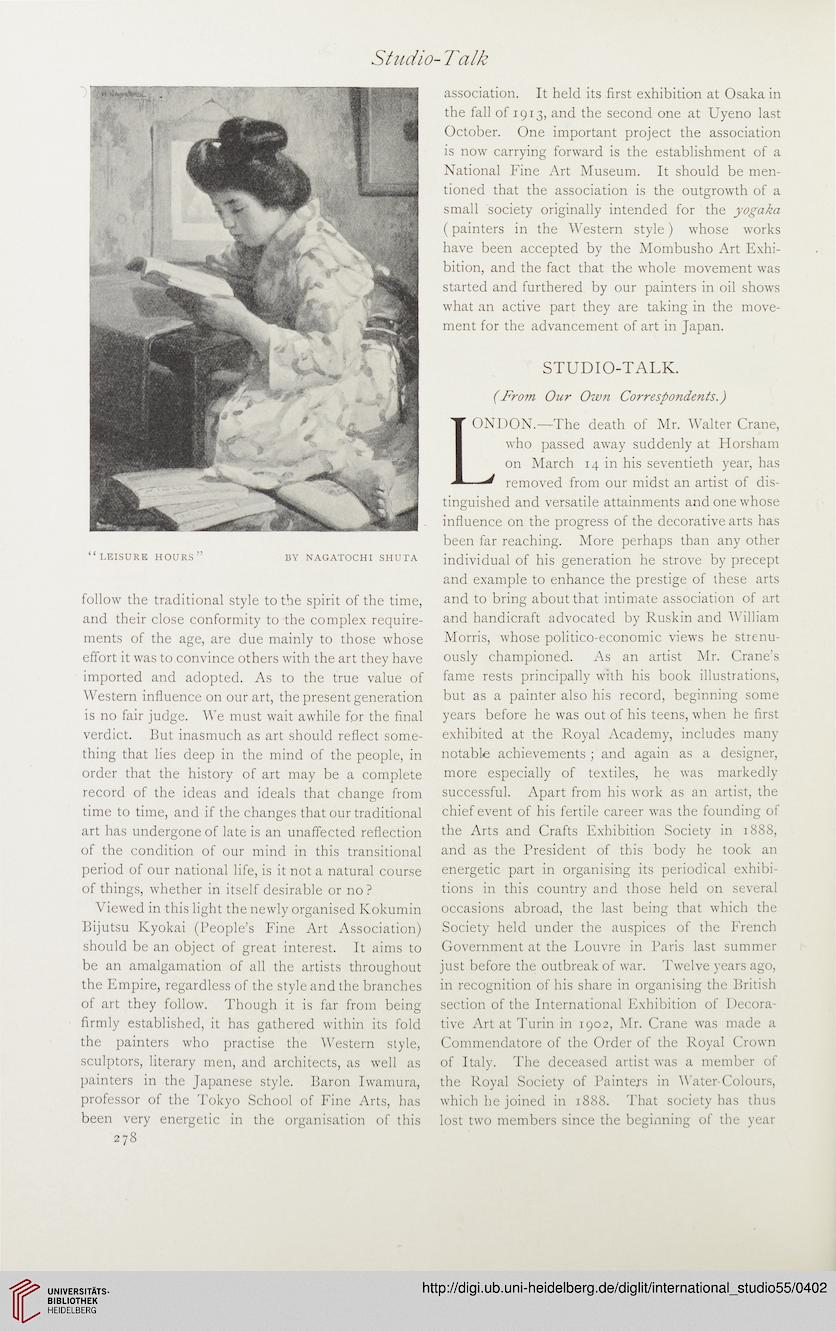 follow the traditional style to the spirit of the time,
and their close conformity to the complex require-
ments of the age, are due mainly to those whose
effort it was to convince others with the art they have
imported and adopted. As to the true value of
Western influence on our art, the present generation
is no fair judge. We must wait awhile for the final
verdict. But inasmuch as art should reflect some-
thing that lies deep in the mind of the people, in
order that the history of art may be a complete
record of the ideas and ideals that change from
time to time, and if the changes that our traditional
art has undergone of late is an unaffected reflection
of the condition of our mind in this transitional
period of our national life, is it not a natural course
of things, whether in itself desirable or no?
Viewed in this light the newly organised Kokumin
Bijutsu Kyokai (People’s Fine Art Association)
should be an object of great interest. It aims to
be an amalgamation of all the artists throughout
the Empire, regardless of the style and the branches
of art they follow. Though it is far from being
firmly established, it has gathered within its fold
the painters who practise the Western style,
sculptors, literary men, and architects, as well as
painters in the Japanese style. Baron Iwamura,
professor of the Tokyo School of Fine Arts, has
been very energetic in the organisation of this
278

association. It held its first exhibition at Osaka in
the fall of 1913, and the second one at Uyeno last
October. One important project the association
is now carrying forward is the establishment of a
National Fine Art Museum. It should be men-
tioned that the association is the outgrowth of a
small society originally intended for the yogaka
(painters in the Western style) whose works
have been accepted by the Mombusho Art Exhi-
bition, and the fact that the whole movement was
started and furthered by our painters in oil shows
what an active part they are taking in the move-
ment for the advancement of art in Japan.
STUDIO-TALK.
(From Our Own Correspondents.)
EDON.—The death of Mr. Walter Crane,
who passed away suddenly at Horsham
on March 14 in his seventieth year, has
removed from our midst an artist of dis-
tinguished and versatile attainments and one whose
influence on the progress of the decorative arts has
been far reaching. More perhaps than any other
individual of his generation he strove by precept
and example to enhance the prestige of these arts
and to bring about that intimate association of art
and handicraft advocated by Ruskin and William
Morris, whose politico-economic views he strenu-
ously championed. As an artist Mr. Crane’s
fame rests principally with his book illustrations,
but as a painter also his record, beginning some
years before he was out of his teens, when he first
exhibited at the Royal Academy, includes many
notable achievements ; and again as a designer,
more especially of textiles, he was markedly
successful. Apart from his work as an artist, the
chief event of his fertile career was the founding of
the Arts and Crafts Exhibition Society in 1888,
and as the President of this body he took an
energetic part in organising its periodical exhibi-
tions in this country and those held on several
occasions abroad, the last being that which the
Society held under the auspices of the French
Government at the Louvre in Paris last summer
just before the outbreak of war. Twelve years ago,
in recognition of his share in organising the British
section of the International Exhibition of Decora-
tive Art at Turin in 1902, Mr. Crane was made a
Commendatore of the Order of the Royal Crown
of Italy. The deceased artist was a member of
the Royal Society of Painters in Water-Colours,
which he joined in 1888. That society has thus
lost two members since the beginning of the year