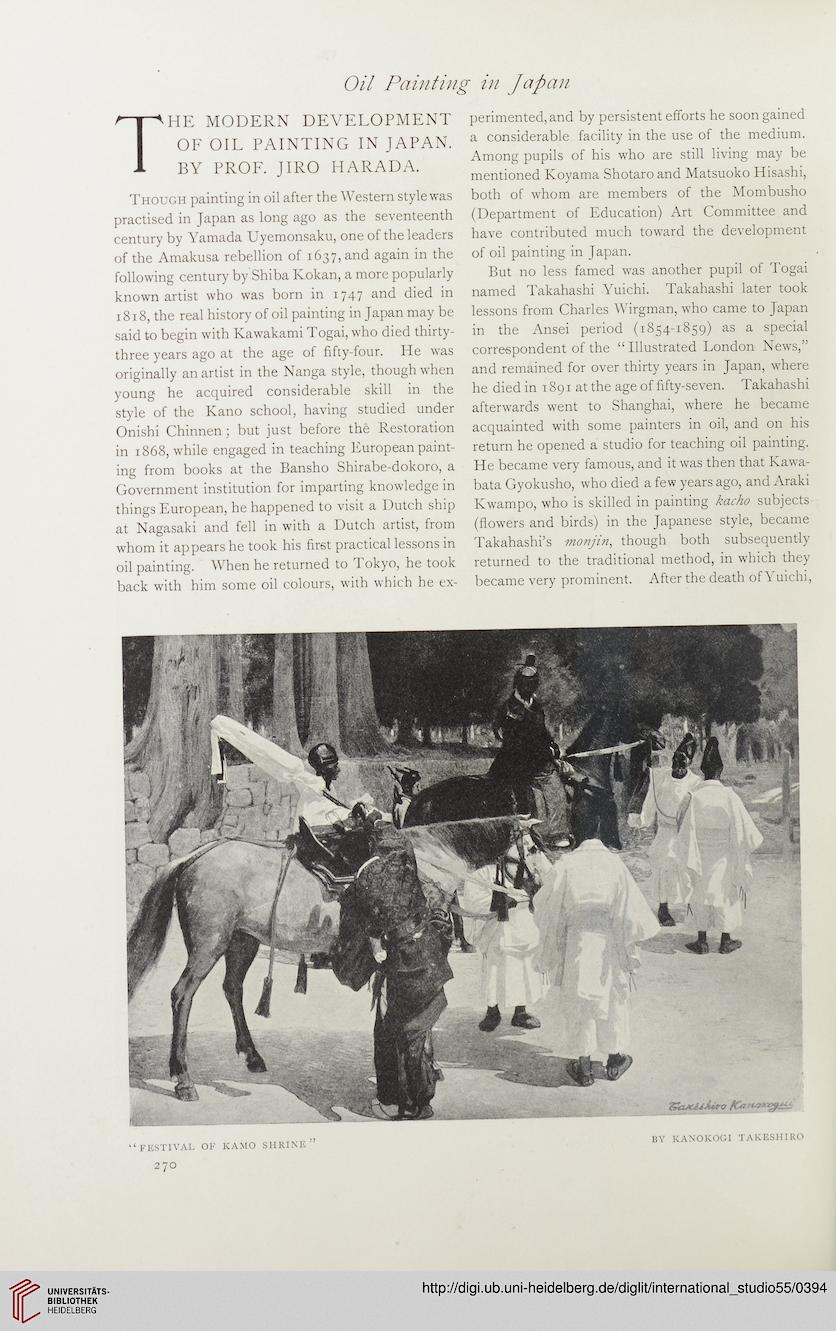 The modern development
OF OIL PAINTING IN JAPAN.
BY PROF. JIRO HARADA.
Though painting in oil after the Western style was
practised in Japan as long ago as the seventeenth
century by Yamada Uyemonsaku, one of the leaders
of the Amakusa rebellion of 1637, and again in the
following century by Shiba Kokan, a more popularly
known artist who was born in 1747 and died in
1818, the real history of oil painting in Japan may be
said to begin with Kawakami Togai, who died thirty-
three years ago at the age of fifty-four. He was
originally an artist in the Nanga style, though when
young he acquired considerable skill in the
style of the Kano school, having studied under
Onishi Chinnen; but just before the Restoration
in 1868, while engaged in teaching European paint-
ing from books at the Bansho Shirabe-dokoro, a
Government institution for imparting knowledge in
things European, he happened to visit a Dutch ship
at Nagasaki and fell in with a Dutch artist, from
whom it appears he took his first practical lessons in
oil painting. When he returned to Tokyo, he took
back with him some oil colours, with which he ex-

perimented, and by persistent efforts he soon gained
a considerable facility in the use of the medium.
Among pupils of his who are still living may be
mentioned Koyama Shotaro and Matsuoko Hisashi,
both of whom are members of the Mombusho
(Department of Education) Art Committee and
have contributed much toward the development
of oil painting in Japan.
But no less famed was another pupil of Togai
named Takahashi Yuichi. Takahashi later took
lessons from Charles Wirgman, who came to Japan
in the Ansei period (1854-1859) as a special
correspondent of the “Illustrated London News,”
and remained for over thirty years in Japan, where
he died in 1891 at the age of fifty-seven. Takahashi
afterwards went to Shanghai, where he became
acquainted with some painters in oil, and on his
return he opened a studio for teaching oil painting.
He became very famous, and it was then that Kawa-
bata Gyokusho, who died a few years ago, and Araki
Kwampo, who is skilled in painting kacho subjects
(flowers and birds) in the Japanese style, became
Takahashi’s monjin, though both subsequently
returned to the traditional method, in which they
became very prominent. After the death of Yuichi,