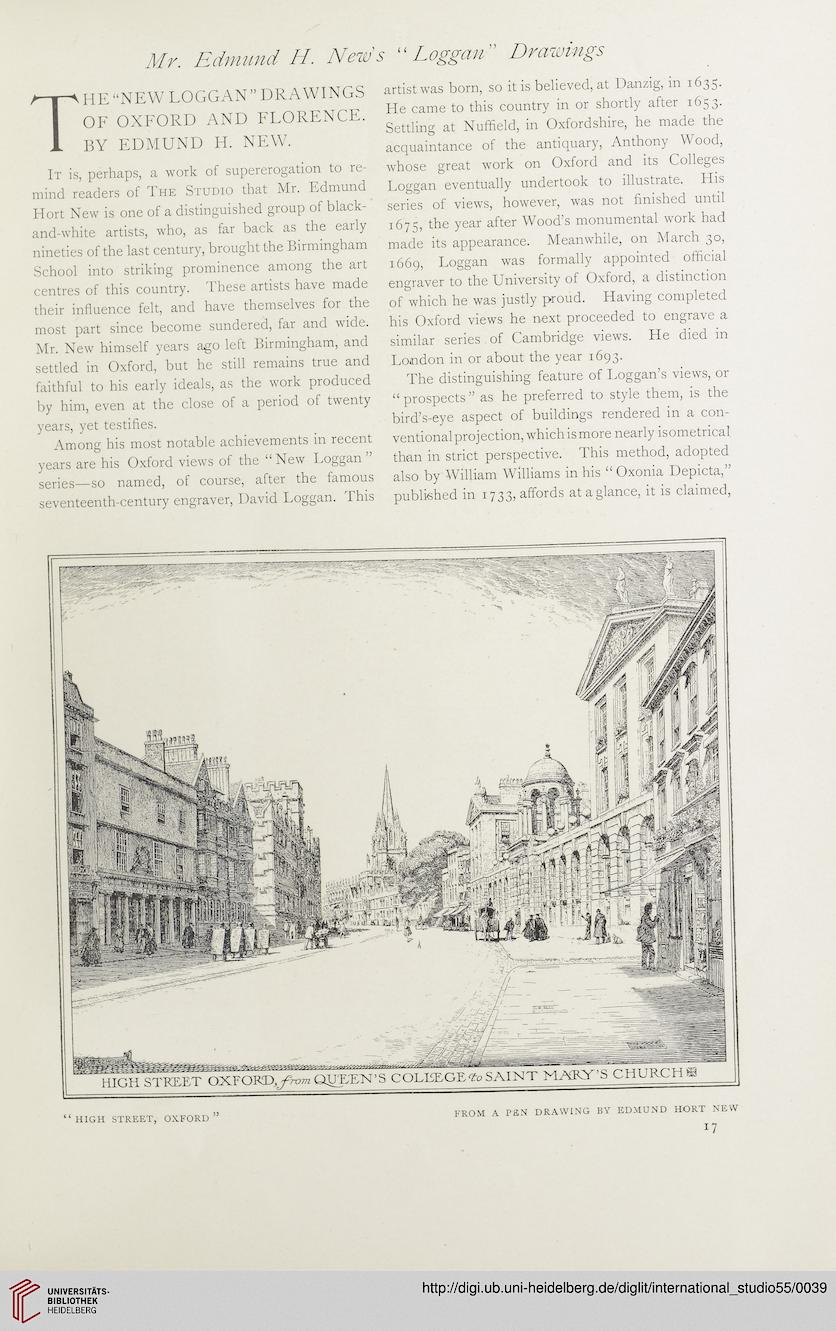 THE “NEW LOGGAN” DRAWINGS
OF OXFORD AND FLORENCE.
BY EDMUND IT. NEW.
It is, perhaps, a work of supererogation to re-
mind readers of The Studio that Mr. Edmund
Hort New is one of a distinguished group of black-
and-white artists, who, as far back as the early
nineties of the last century, brought the Birmingham
School into striking prominence among the art
centres of this country. These artists have made
their influence felt, and have themselves for the
most part since become sundered, far and wide.
Mr. New himself years ago left Birmingham, and
settled in Oxford, but he still remains true and
faithful to his early ideals, as the work produced
by him, even at the close of a period of twenty
years, yet testifies.
Among his most notable achievements in recent
years are his Oxford views of the “New Loggan ”
series—so named, of course, after the famous
seventeenth-century engraver, David Loggan. This

artist was born, so it is believed, at Danzig, in 1635.
He came to this country in or shortly after 1653.
Settling at Nuffield, in Oxfordshire, he made the
acquaintance of the antiquary, Anthony Wood,
whose great work on Oxford and its Colleges
Loggan eventually undertook to illustrate. His
series of views, however, was not finished until
1675, the year after Wood’s monumental work had
made its appearance. Meanwhile, on March 30,
1669, Loggan was formally appointed official
engraver to the University of Oxford, a distinction
of which he was justly proud. Having completed
his Oxford views he next proceeded to engrave a
similar series of Cambridge views. He died in
London in or about the year 1693.
The distinguishing feature of Loggan’s views, or
“prospects” as he preferred to style them, is the
bird’s-eye aspect of buildings rendered in a con-
ventional projection, which is more nearly isometrical
than in strict perspective. This method, adopted
also by William Williams in his “ Oxonia Depicta,”
published in 1733, affords at a glance, it is claimed,


FROM A PEN DRAWING BY EDMUND HORT NEW
17