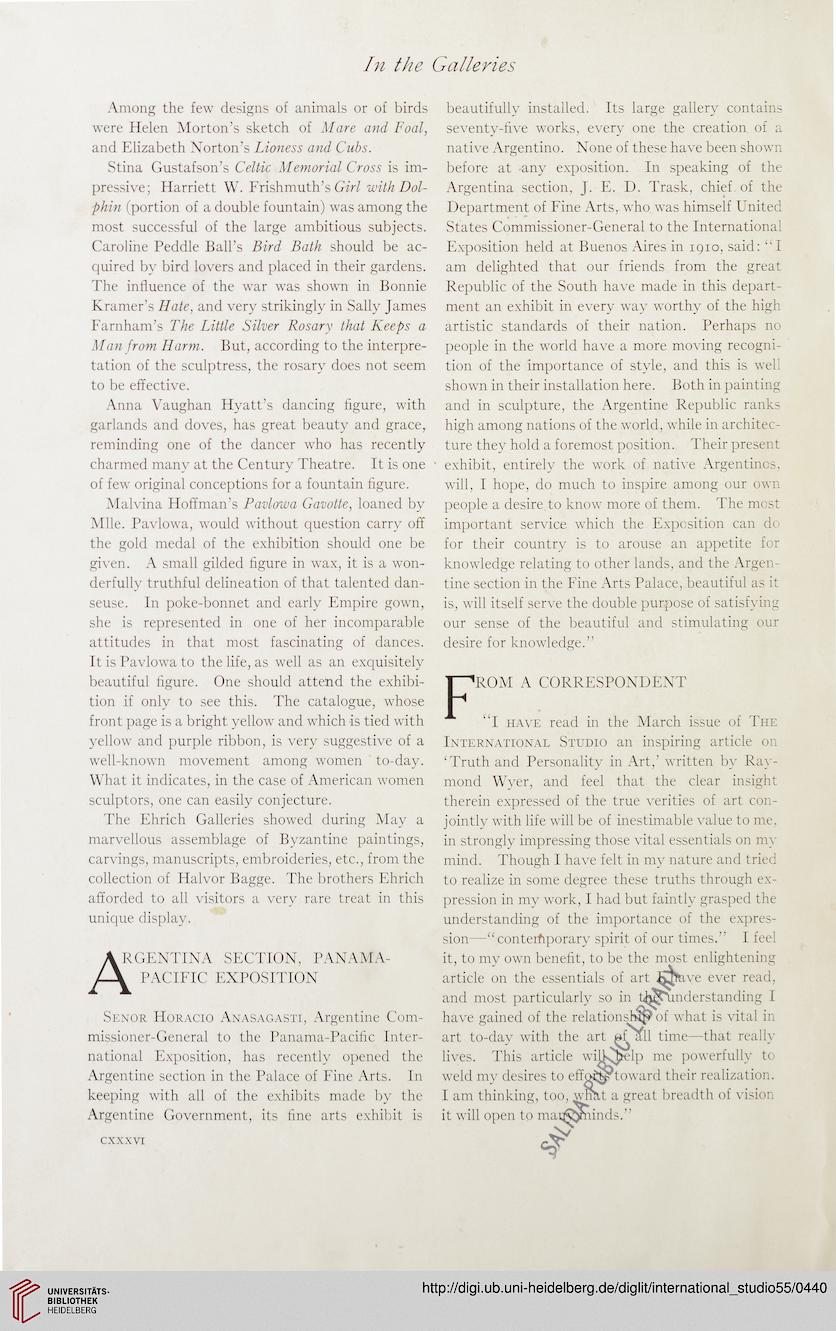 Senor Horacio Anasagasti, Argentine Com-
missioner-General to the Panama-Pacific Inter-
national Exposition, has recently opened the
Argentine section in the Palace of Fine Arts. In
keeping with all of the exhibits made by the
Argentine Government, its fine arts exhibit is
cxxxvi

beautifully installed. Its large gallery contains
seventy-five works, every one the creation of a
native Argentino. None of these have been shown
before at any exposition. In speaking of the
Argentina section, J. E. D. Trask, chief of the
Department of Fine Arts, who was himself United
States Commissioner-General to the International
Exposition held at Buenos Aires in 1910, said: “I
am delighted that our friends from the great
Republic of the South have made in this depart-
ment an exhibit in every way worthy of the high
artistic standards of their nation. Perhaps no
people in the world have a more moving recogni-
tion of the importance of style, and this is well
shown in their installation here. Both in painting
and in sculpture, the Argentine Republic ranks
high among nations of the world, while in architec-
ture they hold a foremost position. Their present
It is one - exhibit, entirely the work of native Argentines,
will, I hope, do much to inspire among our own
people a desire to know more of them. The most
important sendee w’hich the Exposition can do
for their country is to arouse an appetite for
knowledge relating to other lands, and the Argen-
tine section in the Fine Arts Palace, beautiful as it
is, will itself serve the double purpose of satisfying
our sense of the beautiful and stimulating our
desire for knowledge.”

Among the few designs of animals or of birds
were Helen Morton’s sketch of Mare and Foal,
and Elizabeth Norton’s Lioness and Cubs.
Stina Gustafson’s Celtic Memorial Cross is im-
pressive; Harriett W. Frishmuth’s Girl with Dol-
phin (portion of a double fountain) was among the
most successful of the large ambitious subjects.
Caroline Peddle Ball’s Bird Bath should be ac-
quired by bird lovers and placed in their gardens.
The influence of the war was shown in Bonnie
Kramer’s Hate, and very strikingly in Sally James
Farnham’s The Little Silver Rosary that Keeps a
Man from Harm. But, according to the interpre-
tation of the sculptress, the rosary does not seem
to be effective.
Anna Vaughan Hyatt’s dancing figure, with
garlands and doves, has great beauty and grace,
reminding one of the dancer who has recently
charmed many at the Century Theatre,
of few original conceptions for a fountain figure.
Malvina Hoffman’s Pavlowa Gavotte, loaned by
Mlle. Pavlowa, would without question carry off
the gold medal of the exhibition should one be
given. A small gilded figure in wax, it is a won-
derfully truthful delineation of that talented dan-
seuse. In poke-bonnet and early Empire gown,
she is represented in one of her incomparable
attitudes in that most fascinating of dances.
It is Pavlowa to the life, as well as an exquisitely
beautiful figure. One should attend the exhibi-
tion if only to see this. The catalogue, whose
front page is a bright yellow and which is tied with
yellow and purple ribbon, is very suggestive of a
well-known movement among women to-day.
What it indicates, in the case of American women
sculptors, one can easily conjecture.
The Ehrich Galleries showed during May a
marvellous assemblage of Byzantine paintings,
carvings, manuscripts, embroideries, etc., from the
collection of Halvor Bagge. The brothers Ehrich
afforded to all visitors a very rare treat in this
unique display.

“I have read in the March issue of The
International Studio an inspiring article on
‘Truth and Personality in Art,’ written by Ray-
mond Wyer, and feel that the clear insight
therein expressed of the true verities of art con-
jointly with life will be of inestimable value to me.
in strongly impressing those vital essentials on my
mind. Though I have felt in my nature and tried
to realize in some degree these truths through ex-
pression in my work, I had but faintly grasped the
understanding of the importance of the expres-
sion—“conterfiporary spirit of our times.” I feel
it, to my own benefit, to be the most enlightening
article on the essentials of art J^htve ever read,
and most particularly so in t^Tmderstanding I
have gained of the relationship of what is vital in
art to-day with the art A*11 time—-that really
lives. This article will^telp me powerfully to
weld my desires to effex^toward their realization.
I am thinking, too, wpht a great breadth of vision
it will open to maironiinds.”