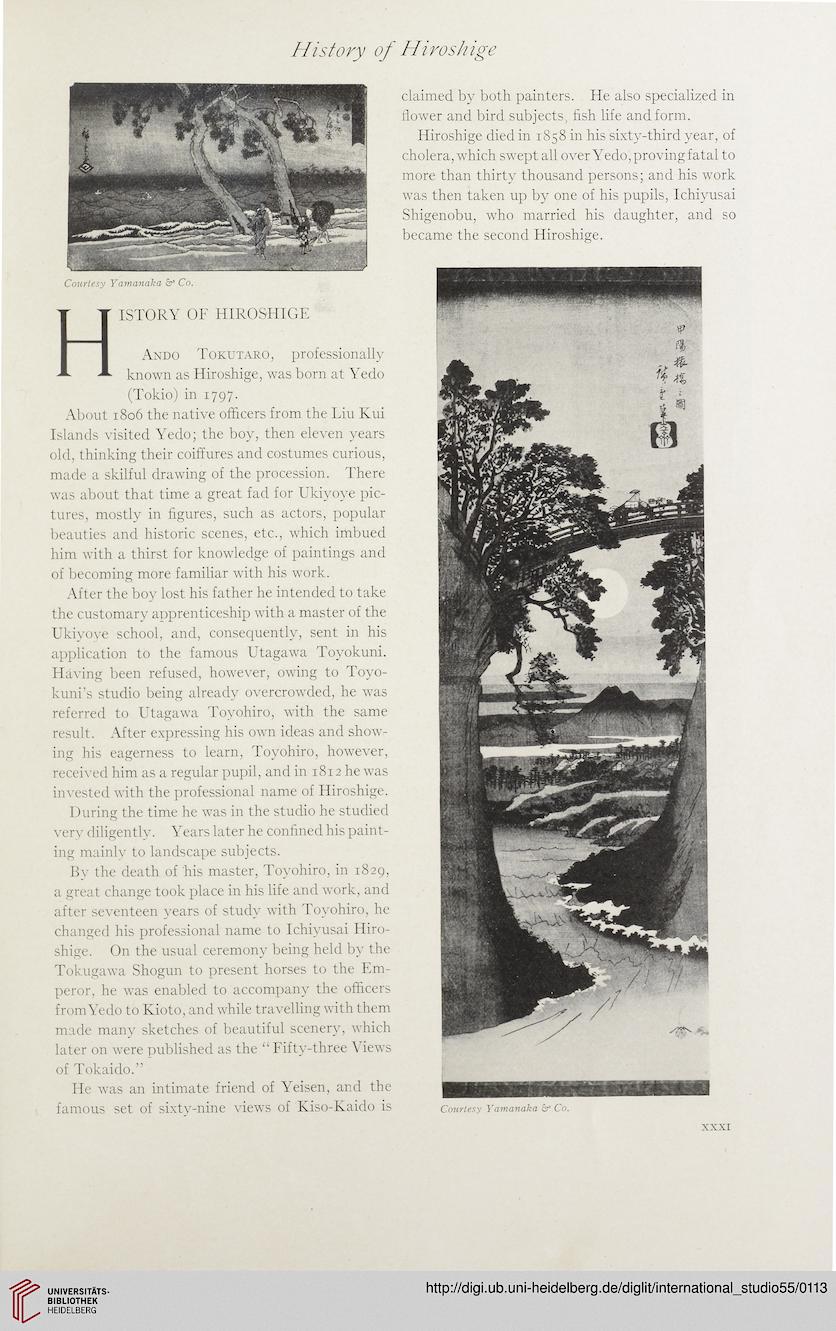 History of hiroshige
Ando Tokutaro, professionally
known as Hiroshige, was born at Yedo

Islands visited Yedo; the boy, then eleven years
old, thinking their coiffures and costumes curious,
made a skilful drawing of the procession. There
was about that time a great fad for Ukiyoye pic-
tures, mostly in figures, such as actors, popular
beauties and historic scenes, etc., which imbued
him with a thirst for knowledge of paintings and
of becoming more familiar with his work.
After the boy lost his father he intended to take
the customary apprenticeship with a master of the
Ukiyoye school, and, consequently, sent in his
application to the famous Utagawa Toyokuni.
Having been refused, however, owing to Toyo-
kuni’s studio being already overcrowded, he was
referred to Utagawa Toyohiro, with the same
result. After expressing his own ideas and show-
ing his eagerness to learn, Toyohiro, however,
received him as a regular pupil, and in 1812 he was
invested with the professional name of Hiroshige.
During the time he was in the studio he studied
very diligently. Years later he confined his paint-
ing mainly to landscape subjects.
By the death of his master, Toyohiro, in 1829,
a great change took place in his life and work, and
after seventeen years of study with Toyohiro, he
changed his professional name to Ichivusai Hiro-
shige. On the usual ceremony being held by the
Tokugawa Shogun to present horses to the Em-
peror, he was enabled to accompany the officers
from Yedo to Kioto, and while travelling with them
made many sketches of beautiful scenery, which
later on were published as the “Fifty-three Views
of Tokaido.”
He was an intimate friend of Yeisen, and the
famous set of sixty-nine views of Kiso-Kaido is

claimed by both painters. He also specialized in
flower and bird subjects, fish life and form.
Hiroshige died in 1858 in his sixty-third year, of
cholera, which swept all over Yedo, proving fatal to
more than thirty thousand persons; and his work
was then taken up by one of his pupils, Ichiyusai
Shigenobu, who married his daughter, and so
became the second Hiroshige.