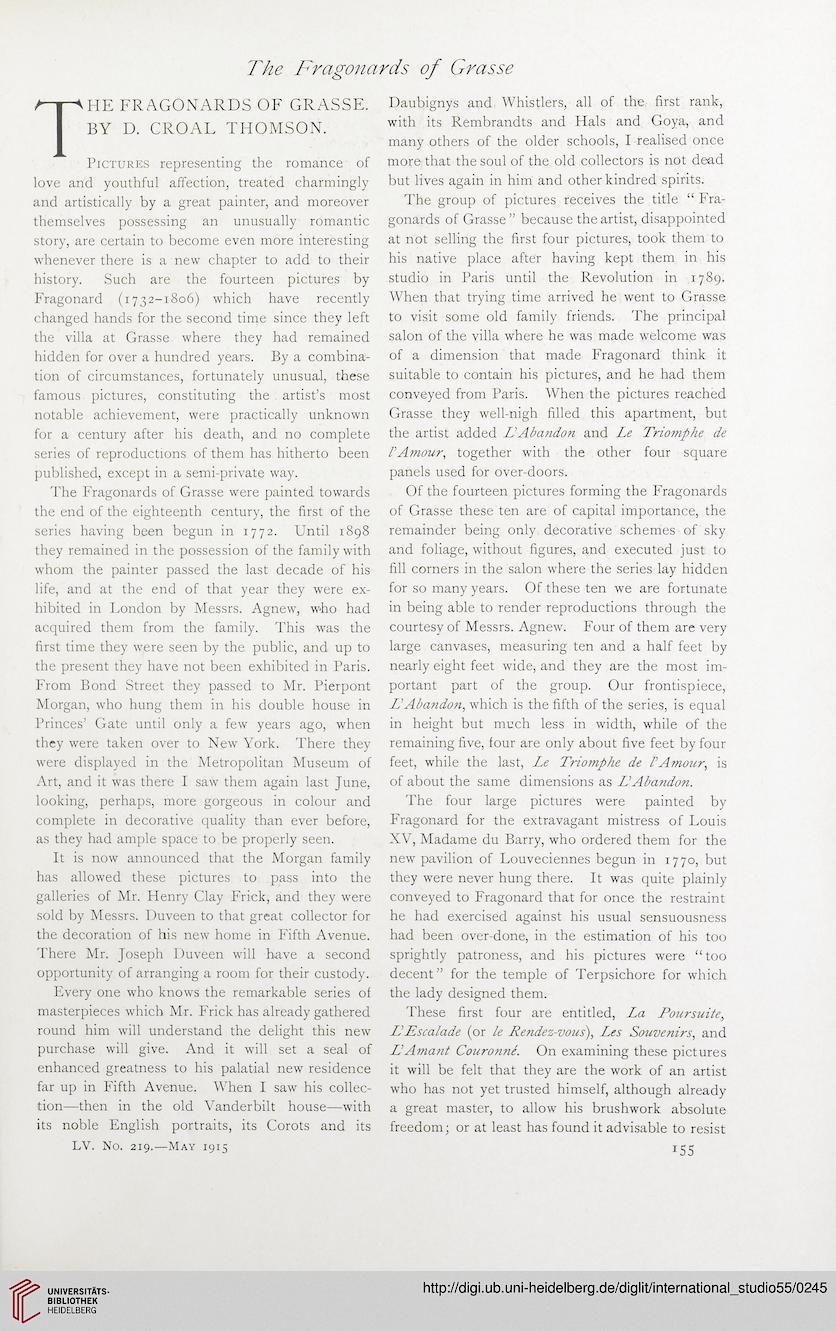 Information about OCR text
The Fragonards of Grasse

THE FRAGONARDS OF GRASSE.
BY D. CROAL THOMSON.
Pictures representing the romance of
love and youthful affection, treated charmingly
and artistically by a great painter, and moreover
themselves possessing an unusually romantic
story, are certain to become even more interesting
whenever there is a new chapter to add to their
history. Such are the fourteen pictures by
Fragonard (1732-1806) which have recently
changed hands for the second time since they left
the villa at Grasse where they had remained
hidden for over a hundred years. By a combina-
tion of circumstances, fortunately unusual, these
famous pictures, constituting the artist’s most
notable achievement, were practically unknown
for a century after his death, and no complete
series of reproductions of them has hitherto been
published, except in a semi-private way.
The Fragonards of Grasse were painted towards
the end of the eighteenth century, the first of the
series having been begun in 1772. Until 1898
they remained in the possession of the family with
whom the painter passed the last decade of his
life, and at the end of that year they were ex-
hibited in London by Messrs. Agnew, who had
acquired them from the family. This was the
first time they were seen by the public, and up to
the present they have not been exhibited in Paris.
From Bond Street they passed to Mr. Pierpont
Morgan, who hung them in his double house in
Princes’ Gate until only a few years ago, when
they were taken over to New York. There they
were displayed in the Metropolitan Museum of
Art, and it was there I saw them again last June,
looking, perhaps, more gorgeous in colour and
complete in decorative quality than ever before,
as they had ample space to be properly seen.
It is now announced that the Morgan family
has allowed these pictures to pass into the
galleries of Mr. Henry Clay Frick, and they were
sold by Messrs. Duveen to that great collector for
the decoration of his new home in Fifth Avenue.
There Mr. Joseph Duveen will have a second
opportunity of arranging a room for their custody.
Every one who knows the remarkable series of
masterpieces which Mr. Frick has already gathered
round him will understand the delight this new
purchase will give. And it will set a seal of
enhanced greatness to his palatial new residence
far up in Fifth Avenue. When I saw his collec-
tion—then in the old Vanderbilt house—with
its noble English portraits, its Corots and its
LV. No. 219.—May 1915

Daubignys and Whistlers, all of the first rank,
with its Rembrandts and Hals and Goya, and
many others of the older schools, I realised once
more that the soul of the old collectors is not dead
but lives again in him and other kindred spirits.
The group of pictures receives the title “ Fra-
gonards of Grasse ” because the artist, disappointed
at not selling the first four pictures, took them to
his native place after having kept them in his
studio in Paris until the Revolution in 1789.
When that trying time arrived he went to Grasse
to visit some old family friends. The principal
salon of the villa where he was made welcome was
of a dimension that made Fragonard think it
suitable to contain his pictures, and he had them
conveyed from Paris. When the pictures reached
Grasse they well-nigh filled this apartment, but
the artist added E Abandon and Le Triomphe de
P Amour, together with the other four square
panels used for over-doors.
Of the fourteen pictures forming the Fragonards
of Grasse these ten are of capital importance, the
remainder being only decorative schemes of sky
and foliage, without figures, and executed just to
fill corners in the salon wrhere the series lay hidden
for so many years. Of these ten we are fortunate
in being able to render reproductions through the
courtesy of Messrs. Agnew. Four of them are very
large canvases, measuring ten and a half feet by
nearly eight feet wide, and they are the most im-
portant part of the group. Our frontispiece,
EAbandon, wrhich is the fifth of the series, is equal
in height but much less in width, while of the
remaining five, four are only about five feet by four
feet, while the last, Le Triomphe de V Amour, is
of about the same dimensions as EAbandon.
The four large pictures were painted by
Fragonard for the extravagant mistress of Louis
XV, Madame du Barry, who ordered them for the
new pavilion of Louveciennes begun in 1770, but
they were never hung there. It was quite plainly
conveyed to Fragonard that for once the restraint
he had exercised against his usual sensuousness
had been over-done, in the estimation of his too
sprightly patroness, and his pictures were “too
decent” for the temple of Terpsichore for which
the lady designed them.
These first four are entitled, La Poursuite,
EEscalade (or le Rendezvous}, Les Souvenirs, and
EAmant Couronne. On examining these pictures
it will be felt that they are the work of an artist
who has not yet trusted himself, although already
a great master, to allow his brushwork absolute
freedom; or at least has found it advisable to resist
*55