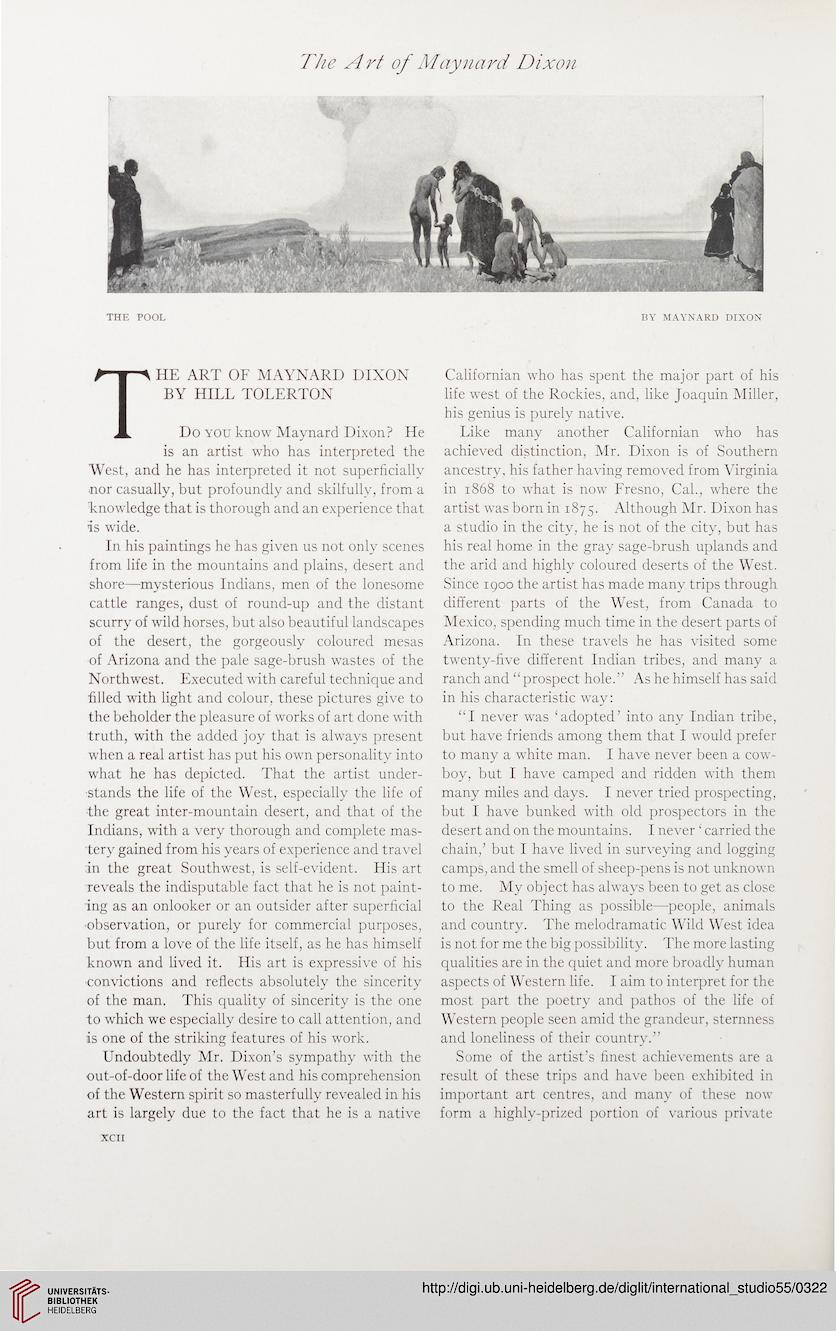 Information about OCR text
The Art of Maynard Dixon

HE ART OF MAYNARD DIXON
BY HILL TOLERTON
Do you know Maynard Dixon? He
is an artist who has interpreted the
West, and he has interpreted it not superficially
nor casually, but profoundly and skilfully, from a
knowledge that is thorough and an experience that
is wide.
In his paintings he has given us not only scenes
from life in the mountains and plains, desert and
shore—mysterious Indians, men of the lonesome
cattle ranges, dust of round-up and the distant
scurry of wild horses, but also beautiful landscapes
of the desert, the gorgeously coloured mesas
of Arizona and the pale sage-brush wastes of the
Northwest. Executed with careful technique and
filled with light and colour, these pictures give to
the beholder the pleasure of works of art done with
truth, with the added joy that is always present
when a real artist has put his own personality into
what he has depicted. That the artist under-
stands the life of the West, especially the life of
the great inter-mountain desert, and that of the
Indians, with a very thorough and complete mas-
tery gained from his years of experience and travel
in the great Southwest, is self-evident. His art
reveals the indisputable fact that he is not paint-
ing as an onlooker or an outsider after superficial
observation, or purely for commercial purposes,
but from a love of the life itself, as he has himself
known and lived it. His art is expressive of his
■convictions and reflects absolutely the sincerity
of the man. This quality of sincerity is the one
to which we especially desire to call attention, and
is one of the striking features of his work.
Undoubtedly Mr. Dixon’s sympathy with the
out-of-door life of the West and his comprehension
of the Western spirit so masterfully revealed in his
art is largely due to the fact that he is a native

Californian who has spent the major part of his
life west of the Rockies, and, like Joaquin Miller,
his genius is purely native.
Like many another Californian who has
achieved distinction, Mr. Dixon is of Southern
ancestry, his father having removed from Virginia
in 1868 to what is now Fresno, Cal., where the
artist was born in 1875. Although Mr. Dixon has
a studio in the city, he is not of the city, but has
his real home in the gray sage-brush uplands and
the arid and highly coloured deserts of the West.
Since 1900 the artist has made many trips through
different parts of the West, from Canada to
Mexico, spending much time in the desert parts of
Arizona. In these travels he has visited some
twenty-five different Indian tribes, and many a
ranch and “ prospect hole.” As he himself has said
in his characteristic way:
“I never was ‘adopted’ into any Indian tribe,
but have friends among them that I would prefer
to many a white man. I have never been a cow-
boy, but I have camped and ridden with them
many miles and days. I never tried prospecting,
but I have bunked with old prospectors in the
desert and on the mountains. I never ‘ carried the
chain,’ but I have lived in surveying and logging
camps, and the smell of sheep-pens is not unknown
to me. My object has always been to get as close
to the Real Thing as possible—people, animals
and country. The melodramatic Wild West idea
is not for me the big possibility. The more lasting
qualities are in the quiet and more broadly human
aspects of Western life. I aim to interpret for the
most part the poetry and pathos of the life of
Western people seen amid the grandeur, sternness
and loneliness of their country.”
Some of the artist’s finest achievements are a
result of these trips and have been exhibited in
important art centres, and many of these now
form a highly-prized portion of various private