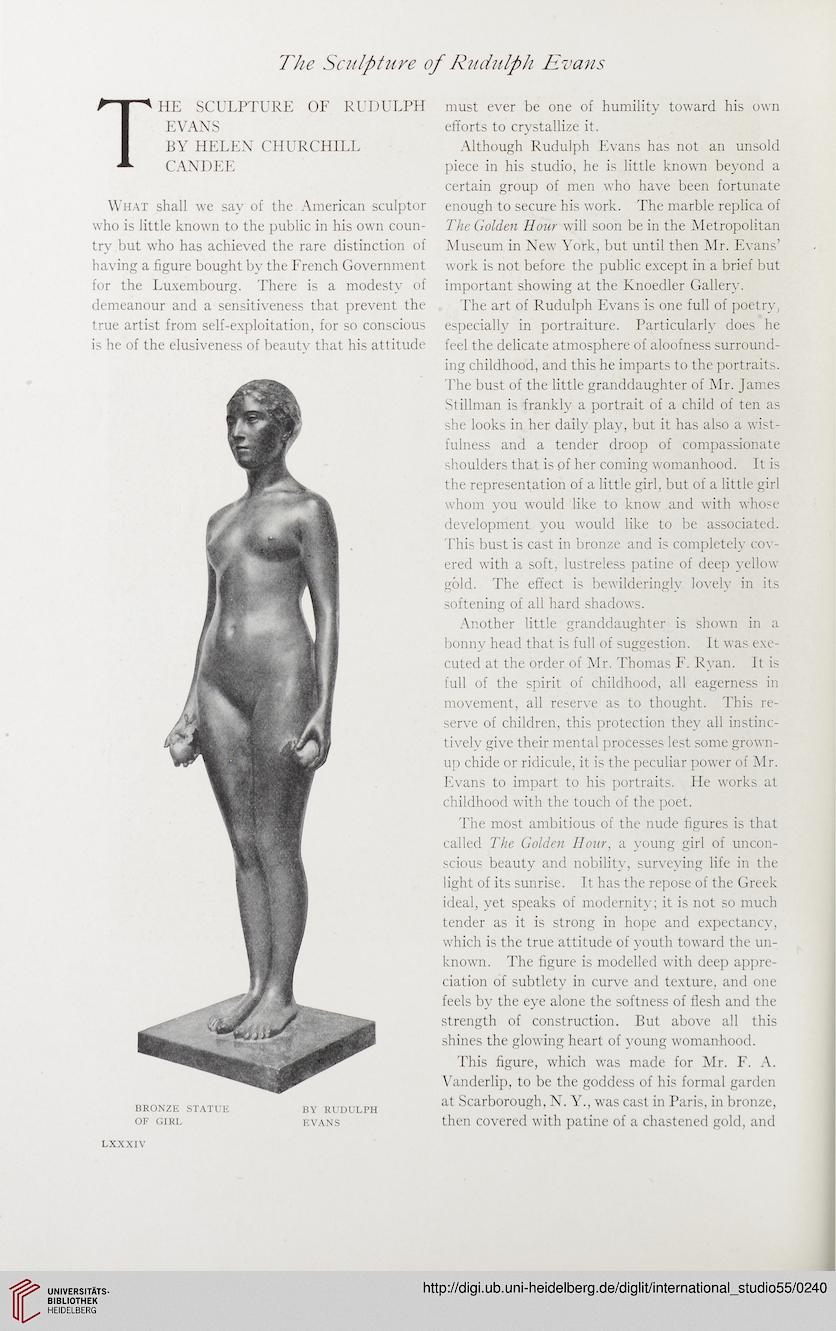 Information about OCR text
The Sculpture of Rudulph Evans

The sculpture of rudulph
EVANS
BY HELEN CHURCHILL
CANDEE
What shall we say of the American sculptor
who is little known to the public in his own coun-
try but who has achieved the rare distinction of
having a figure bought by the French Government
for the Luxembourg. There is a modesty of
demeanour and a sensitiveness that prevent the
true artist from self-exploitation, for so conscious
is he of the elusiveness of beautv that his attitude

must ever be one of humility toward his own
efforts to crystallize it.
Although Rudulph Evans has not an unsold
piece in his studio, he is little known beyond a
certain group of men who have been fortunate
enough to secure his work. The marble replica of
The, Golden Hour will soon be in the Metropolitan
Museum in New York, but until then Mr. Evans’
work is not before the public except in a brief but
important showing at the Knoedler Gallery.
The art of Rudulph Evans is one full of poetry,
especially in portraiture. Particularly does he
feel the delicate atmosphere of aloofness surround-
ing childhood, and this he imparts to the portraits.
The bust of the little granddaughter of Mr. James
Stillman is frankly a portrait of a child of ten as
she looks in her daily play, but it has also a wist-
fulness and a tender droop of compassionate
shoulders that is of her coming womanhood. It is
the representation of a little girl, but of a little girl
whom you would like to know and with whose
development you would like to be associated.
This bust is cast in bronze and is completely cov-
ered with a soft, lustreless patine of deep yellow
gold. The effect is bewilderinglv lovely in its
softening of all hard shadows.
Another little granddaughter is shown in a
bonny head that is full of suggestion. It was exe-
cuted at the order of Mr. Thomas F. Ryan. It is
full of the spirit of childhood, all eagerness in
movement, all reserve as to thought. This re-
serve of children, this protection they all instinc-
tively give their mental processes lest some grown-
up chide or ridicule, it is the peculiar power of Mr.
Evans to impart to his portraits. He works at
childhood with the touch of the poet.
The most ambitious of the nude figures is that
called The. Golden Hour, a young girl of uncon-
scious beauty and nobility, surveying life in the
light of its sunrise. It has the repose of the Greek
ideal, yet speaks of modernity; it is not so much
tender as it is strong in hope and expectancy,
which is the true attitude of youth toward the un-
known. The figure is modelled with deep appre-
ciation of subtlety in curve and texture, and one
feels by the eye alone the softness of flesh and the
strength of construction. But above all this
shines the glowing heart of young womanhood.
This figure, which was made for Mr. F. A.
Vanderlip, to be the goddess of his formal garden
at Scarborough, N. Y., was cast in Paris, in bronze,
then covered with patine of a chastened gold, and