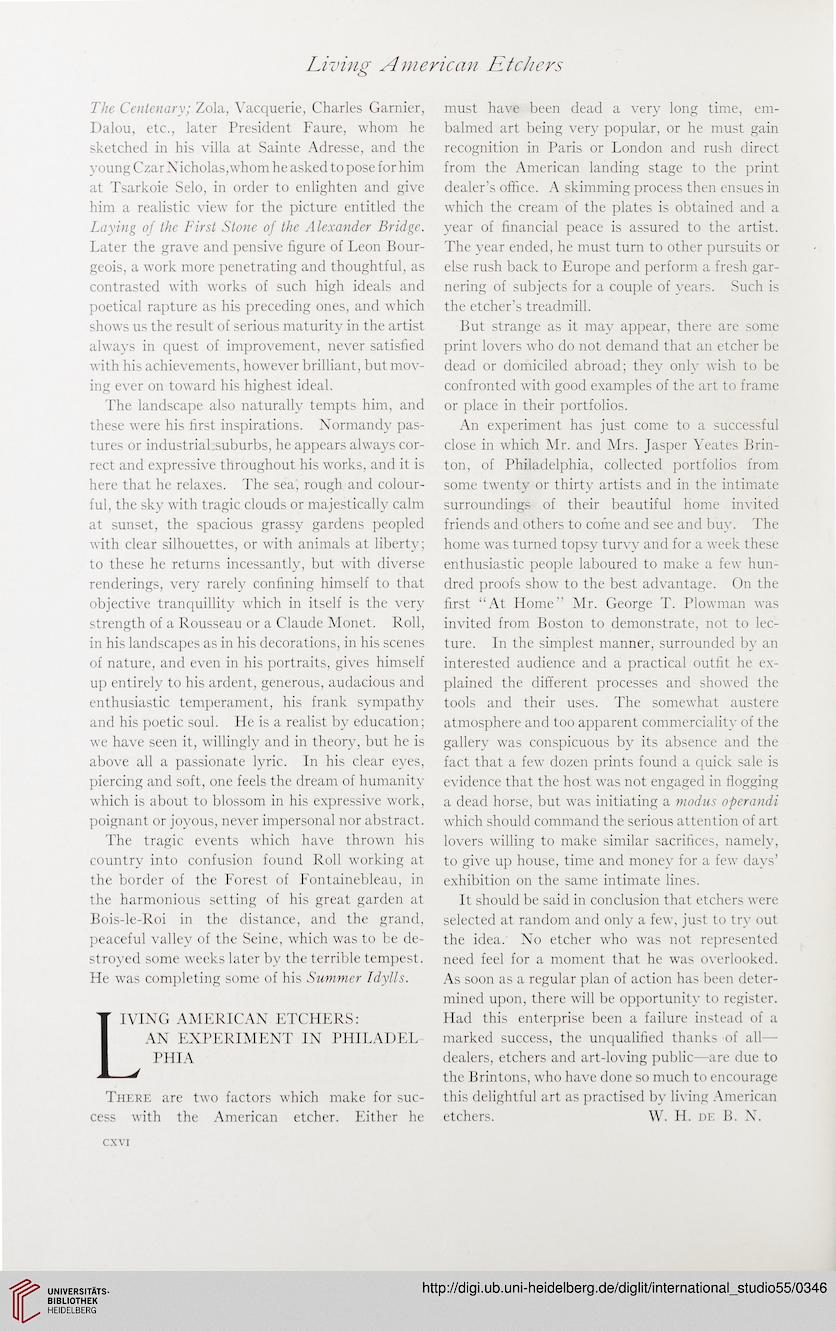 The Centenary; Zola, Vacquerie, Charles Garnier,
Dalou, etc., later President Faure, whom he
sketched in his villa at Sainte Adresse, and the
young Czar Nicholas,whom he asked to pose for him
at Tsarkoie Selo, in order to enlighten and give
him a realistic view for the picture entitled the
Laying of the First Stone of the Alexander Bridge.
Later the grave and pensive figure of Leon Bour-
geois, a work more penetrating and thoughtful, as
contrasted with works of such high ideals and
poetical rapture as his preceding ones, and which
shows us the result of serious maturity in the artist
always in quest of improvement, never satisfied
with his achievements, however brilliant, but mov-
ing ever on toward his highest ideal.
The landscape also naturally tempts him, and
these were his first inspirations. Normandy pas-
tures or industrial.suburbs, he appears always cor-
rect and expressive throughout his works, and it is
here that he relaxes. The seal rough and colour-
ful, the sky with tragic clouds or majestically calm
at sunset, the spacious grassy gardens peopled
with clear silhouettes, or with animals at liberty;
to these he returns incessantly, but with diverse
renderings, very rarely confining himself to that
objective tranquillity which in itself is the very
strength of a Rousseau or a Claude Monet. Roll,
in his landscapes as in his decorations, in his scenes
of nature, and even in his portraits, gives himself
up entirely to his ardent, generous, audacious and
enthusiastic temperament, his frank sympathy
and his poetic soul. He is a realist by education;
we have seen it, willingly and in theory, but he is
above all a passionate lyric. In his clear eyes,
piercing and soft, one feels the dream of humanity
which is about to blossom in his expressive work,
poignant or joyous, never impersonal nor abstract.
The tragic events which have thrown his
country into confusion found Roll working at
the border of the Forest of Fontainebleau, in
the harmonious setting of his great garden at
Bois-le-Roi in the distance, and the grand,
peaceful valley of the Seine, which was to be de-
stroyed some weeks later by the terrible tempest .
He was completing some of his Summer Idylls.
T IVING AMERICAN ETCHERS:
AN EXPERIMENT IN PHILADEL
PHIA
There are two factors which make for suc-
cess with the American etcher. Either he

must have been dead a very long time, em-
balmed art being very popular, or he must gain
recognition in Paris or London and rush direct
from the American landing stage to the print
dealer’s office. A skimming process then ensues in
which the cream of the plates is obtained and a
year of financial peace is assured to the artist.
The year ended, he must turn to other pursuits or
else rush back to Europe and perform a fresh gar-
nering of subjects for a couple of years. Such is
the etcher’s treadmill.
But strange as it may appear, there are some
print lovers who do not demand that an etcher be
dead or domiciled abroad; they only wish to be
confronted with good examples of the art to frame
or place in their portfolios.
An experiment has just come to a successful
close in which Mr. and Mrs. Jasper Yeates Brin-
ton, of Philadelphia, collected portfolios from
some twenty or thirty artists and in the intimate
surroundings of their beautiful home invited
friends and others to cofne and see and buy. The
home was turned topsy turvy and for a week these
enthusiastic people laboured to make a few hun-
dred proofs show to the best advantage. On the
first “At Home” Mr. George T. Plowman was
invited from Boston to demonstrate, not to lec-
ture. In the simplest manner, surrounded by an
interested audience and a practical outfit he ex-
plained the different processes and showed the
tools and their uses. The somewhat austere
atmosphere and too apparent commerciality of the
gallery was conspicuous by its absence and the
fact that a few dozen prints found a quick sale is
evidence that the host was not engaged in flogging
a dead horse, but was initiating a modus operandi
which should command the serious attention of art
lovers willing to make similar sacrifices, namely,
to give up house, time and money for a few days’
exhibition on the same intimate lines.
It should be said in conclusion that etchers were
selected at random and only a few, just to try out
the idea. No etcher who was not represented
need feel for a moment that he was overlooked.
As soon as a regular plan of action has been deter-
mined upon, there will be opportunity to register.
Had this enterprise been a failure instead of a
marked success, the unqualified thanks of all—-
dealers, etchers and art-loving public—are due to
the Brintons, who have done so much to encourage
this delightful art as practised by living American
etchers. W. H. de B. N.