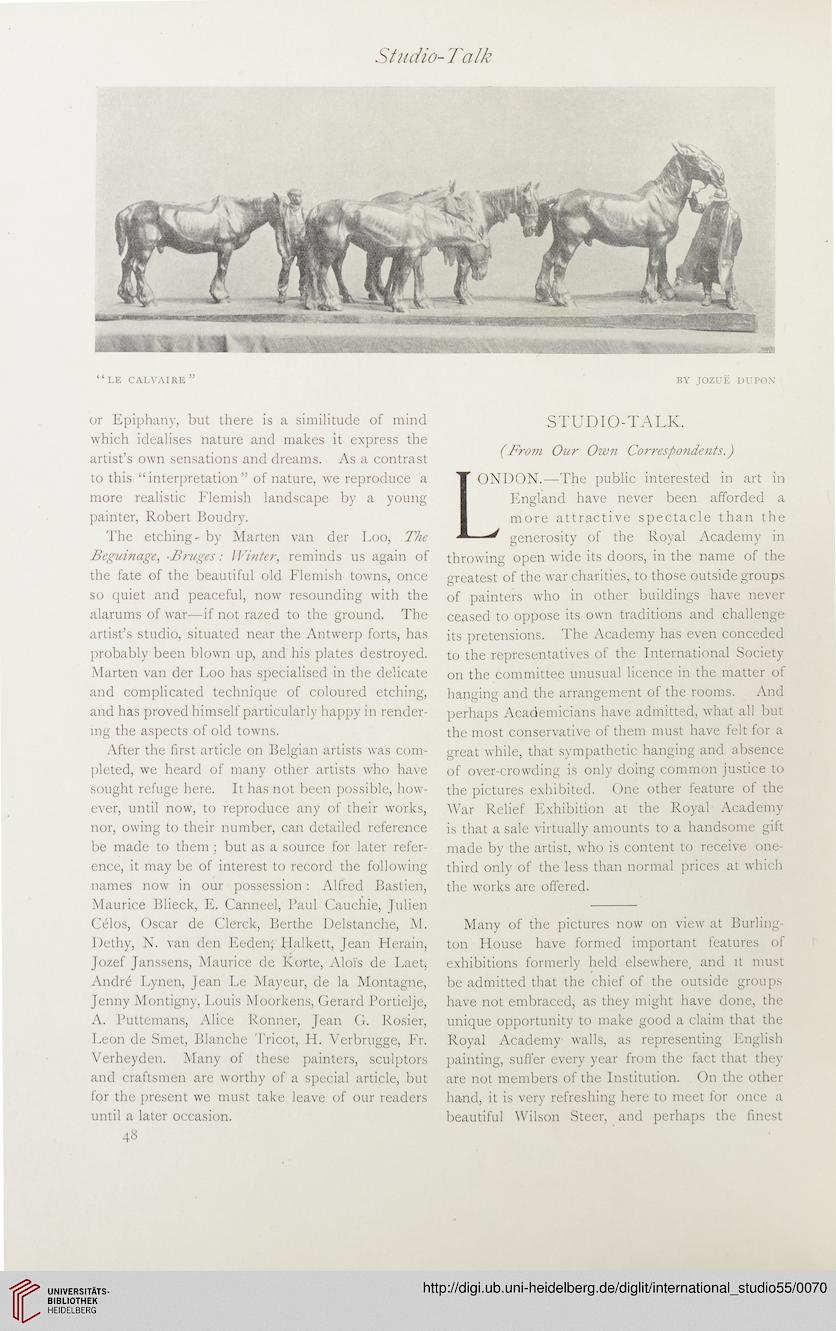 or Epiphany, but there is a similitude of mind
which idealises nature and makes it express the
artist’s own sensations and dreams. As a contrast
to this “interpretation” of nature, we reproduce a
more realistic Flemish landscape by a young
painter, Robert Boudry.
The etching- by Marten van der Loo, The
Beguinage, -Bruges: Winter, reminds us again of
the fate of the beautiful old Flemish towns, once
so quiet and peaceful, now resounding with the
alarums of war—if not razed to the ground. The
artist’s studio, situated near the Antwerp forts, has
probably been blown up, and his plates destroyed.
Marten van der Loo has specialised in the delicate
and complicated technique of coloured etching,
and has proved himself particularly happy in render-
ing the aspects of old towns.
After the first article on Belgian artists was com-
pleted, we heard of many other artists who have
sought refuge here. It has not been possible, how-
ever, until now, to reproduce any of their works,
nor, owing to their number, can detailed reference
be made to them; but as a source for later refer-
ence, it may be of interest to record the following
names now in our possession : Alfred Bastien,
Maurice Blieck, E. Canneel, Paul Cauchie, Julien
Celos, Oscar de Clerck, Berthe Delstanche, M.
Dethy, N. van den Eeden; Halkett, Jean Herain,
Jozef Janssens, Maurice de Korte, Alois de Laet,
Andre Lynen, Jean Le Mayeur, de la Montagne,
Jenny Montigny, Louis Moorkens, Gerard Portielje,
A. Puttemans, Alice Ronner, Jean G. Rosier,
Leon de Smet, Blanche Tricot, H. Verbrugge, Fr.
Verheyden. Many of these painters, sculptors
and craftsmen are worthy of a special article, but
for the present we must take leave of our readers
until a later occasion.
48

STUDIO-TALK.
(From Our Own Correspondents.)
LONDON.—The public interested in art in
England have never been afforded a
more attractive spectacle than the
—generosity of the Royal Academy in
throwing open wide its doors, in the name of the
greatest of the war charities, to those outside groups
of painters who in other buildings have never
ceased to oppose its own traditions and challenge
its pretensions. The Academy has even conceded
to the representatives of the International Society
on the committee unusual licence in the matter of
hanging and the arrangement of the rooms. And
perhaps Academicians have admitted, what all but
the most conservative of them must have felt for a
great while, that sympathetic hanging and absence
of over-crowding is only doing common justice to
the pictures exhibited. One other feature of the
War Relief Exhibition at the Royal Academy
is that a sale virtually amounts to a handsome gift
made by the artist, who is content to receive one-
third only of the less than normal prices at which
the works are offered.

Many of the pictures now on view at Burling-
ton House have formed important features of
exhibitions formerly held elsewhere, and it must
be admitted that the chief of the outside groups
have not embraced, as they might have done, the
unique opportunity to make good a claim that the
Royal Academy walls, as representing English
painting, suffer every year from the fact that they
are not members of the Institution. On the other
hand, it is very refreshing here to meet for once a
beautiful Wilson Steer, and perhaps the finest